DAILY RECORD LETTER OF THE DAY - FORTH CROSSING?

This morning I got a cheque for £20 from the Daily Record for their letter of the day. Unfortunately their search facility doesn't show anything new from me so I don't actually know which letter it was. The cheque is dated 15th December but they may be written in advance. Here are my most recent letters to them. I suspect it is the first listed & have highlighted it, which would mean the cheque is indeed predated. It is the shortest & the most directly Scottish. All 3 were sent out across the board: 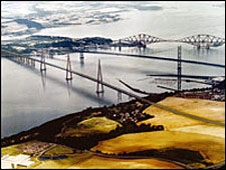 It has just been announced that the people of Hong Kong & Guandong provinces are to build a new connecting bridge. The price is £6.3 billion & the central government is sharing in the cost. How different from Scotland where we cannot raise £3 billion for a new Forth Bridge. How different from Scotland also that the Chinese are getting a 50 km bridge for that price whereas for half that we get one just over 1 km long. Another comparison would be with Norway where they have built 750 km of tunnels at about £7 million per km whereas the "official" Scottish price for a Forth Tunnel is £4.3 billion. The grossly inflated prices of our public projects is scandalous but no MSP is even willing to try to explain it.

(Ref Chinese bridge http://nextbigfuture.com/2009/12/world-longest-sea-bridge-starts.htmlFoI on how tunnel price was made up http://a-place-to-stand.blogspot.com/2007/10/forth-tunnel-price-fakery.html )

As part of the "trial" of Radovan Karadzic evidence has been released about the bodies allegedly part of the "8,000 man Srebrenica massacre." There are incongruities. While there are 3568 autopsies some of these are of just a few bones. Between them they have only 1919 left femurs & 1923 right ones which suggests under 2,000 actual bodies. 477 of these have shrapnel wounds - evidence of combat death.

However the real problem is what the ICTY have not made available. It is undenied. though also largely unreported, that our Moslem Nazi allies in Srebrenica murdered at least 3,870 men, women & children in surrounding villages, though mainly women & children because the men were in the army. NATO commander General Morillon, among others, testified about this in the Milosevic "trial". This is not counted as genocide for unexplained reasons. Since 1995 DNA technology has improved enormously & it is now possible to determine ethnicity with considerable accuracy. Since none of the villager's bodies have, officially, been found it is likely that some & possible that all of these are Serbs. This is enhanced by the fact that contemporary reports said there were only 7,500 Srebrenica Moslem forces & that their leader, when he announced the "massacre" claimed they had all been killed but it was subsequently proven that 7,000 of them had got through the lines.

This evidence is certainly consistent with Serbian claims that the "Srebrenica massacre" was a deliberate propaganda fraud used by NATO politicians to persuade us to support their military action in favour of Moslem & Croatians, many of whose leaders were openly genocidal & former members of another multinational military organisation - the SS. The "court" must make all the evidence available if justice is even to be attempted.

University of East Anglia has appointed Sir Alasdair Muir Russell to chair its "independent" inquiry into whether the leaked emails & other information showing the people collating the data allegedly showing worldwide global warming have been in any way inaccurate. This is extremely embarrassing for the government ministers & civil servants who have thrown grants at anybody pushing the catastrophic warming theory & denied them to sceptics. Since the emails contain remarks like "hid the decline" in global temperature & "I swear I pulled every trick out of my sleeve trying to milk something out of that... I don't think it'd be productive to try and juggle the chronology statistics any more than I already have" & in scientific terms even more damagingly they destroyed their original data on which the entire theory is based making it impossible for other researchers to check if it is valid. This ability to check, known as falsifiability is about the most basic rule of science - an uncheckable claim simply isn't science.

In the circumstances Sir Alasdair would seem to have a very simple task, even though he isn't a scientist. He is a career civil servant who has enjoyed the full confidence of government ministers when he was Permanent secretary at the Scottish Office. Indeed this level of confidence does not seem to have been affected when, according to Wikipedia "Scottish Parliament Building and was criticised by Lord Fraser of Carmyllie's enquiry for failing to keep the politicians informed that the expenditure was far in excess of the budget". That report let the politicians off extremely lightly effectively finding that nobody had done anything seriously wrong in blowing £430 million of our money & his career among the "great & good" does not seem to have suffered.

What is actually required over this scandal is a genuinely independent inquiry, sitting in public, taking evidence under oath & chaired by a prominent & respected scientist who has not been part, on either side, of the warming debate, or employed by government ministers & civil servants? I would suggest one of the not inconsiderable number of retired British Nobel Prize winners. If, as appears, alleged catastrophic global warming is wholly unproven & at least partly fraudulent it is a scandal which has cost us not hundreds of millions but hundreds of billions. Anything less than a real inquiry into what is becoming known worldwide as "climategate" will be seen as a cover up & deserve to be.