On 14th Feb I sent a further FoI to SEPA about their Dalgety Bay claims and on 14th March (4 weeks and a day or 1 day longer than the legally required 20 working days) they replied. Here are my questions and their answers:

Q1 I therefore must ask you under the FoI for the independent chemical or perhaps simply spectrographic evidence of radium in these particles you claim to have. I will not insist on spectrographic evidence that none of the 9 tonnes of uranium and thorium naturally present had reached these bits of soil, which you claim, though this would be a most remarkable event.

A2 Daughter elements of Radium 226 have been measured and are therefore not non-existent.

Q3 I must also ask you whether, after spending an estimated £4 million, you can dispute in any factual way the best (admittedly only, since you haven't even tried) calculation of the maximum possible original radiation exposure here - that any radium lost there could not exceed 1/4 of the radium naturally present in a square mile or 1/36 billionth of all the radioactive material.

A3 SEPA have not detailed any costs spent. Therefore this information is excepted under Regulation 10(4)(a) of the Environmental Information Regulations 2004. The text of which is reproduced below.
(4)A Scottish public authority may refuse to make environmental information available to the extent that - (a) it does not hold that information when an applicant's request is received.

Q4 Finally I must ask if SEPA's remit has ever or will ever allow you to claim that any report whatsoever from SEPA ever has or ever will represent a higher standard of honesty than the total dishonesty that would be demonstrated by a failure to produce "daughter elements" of radium in solid form; WW2 era paint in the particles or pure radium particles.

A4 The progeny of Radium has been determined in the laboratory, with the results of these tests being publicly available.This information has been previously supplied in response to past enquiries.
Please refer to http://www.sepa.org.uk/radioactive_substances/dalgety_bay.aspx

Not exactly informative. More importantly not, even inexactly, truthful.

A1 - Obviously does not provide the requested evidence for their claim to have found radium. That is perhaps unsurprising since no such evidence exists so they are lying when they claim to have found it. However SEPA here have not retracted the claim by one inch, despute having been had ample time to consider it.

This proves that, though it is a deliberate lie, it also represents the very pinnacle of honesty to which anybody in SEPA ever aspires.

A2 - Is a lie - "radium-226, which has a half-life of 1601 years and decays into radon gas" -  sonot a series of measurable "daughter elements" as claimed but one, and one which is a noble (non-reactive) gas and thus could not possibly have been found as part of a rock. In any universe in which the most fundamental laws of physics apply SEPA can only be a wholly dishonest organisation. Obviously the necessary evidence of such "rocky" Radon gas never been produced.

A3 - If this is in any way truthful SEPA have never made any slightest estimate of how much they have spent pushing this fraud. I cannot say for certain that this is a lie but that would be incompatible with an organisation run with the remotest concern for financial responsibility. I would be interested to know if this is in any way abnormal or undesired within the Holyrood government.

A4 - Doesn't attempt to answer that question. Instead it gives a, dishonest, answer to 1 - to have found radium, by chemical or spetroscopic means. The only reference to radium on the page linked to is to say that there was radium in aircraft dials - something which, as previously proven, could not have added more than 1 36 billionth to the natural radioactives there. I note that, dishonest though they are, SEPA have not felt it possible to dispute in any way that the radium "threat" is indeed less that one 36 billionth of the natural radioactives.

To - Its Public Knowledge - FoI commissioners for Scotland

I wish to request a review of SEPA's response to this FoI and indeed to their long string of previous ones. They have simply refused to answer any of the queastions.

They will not say what "independent chemical or perhaps simply spectrographic evidence of radium" they have. If they have none, as I believe, they still have a duty to publicly answer this, by saying that while they have maintained it repeatedly and deliberately it is untrue.

They have refused to produce their evidence of finding the "daughter elements" of radium bound into the rock. This would be particularly egregious, if they have found them, as this would turn the whole of modern physics on its head and it would be highly improper to prevent the world's physiscists knowing it.

They have refused to say whether they are claiming that the radium could be more than 1/4 of the naturally occuring radium or 1 36 billionth of all the radioactive material. They have previously always suggested that this is a serious threat and if they have not retracted that I submit they have a duty to say that they do not accept the only calculation that has been done and why.

They have refused to say whether they have any doubt that their claims represent the pinnacle of honesty to which SEPA ever aspire. The answer to that should be obvious and easy.

I would like a ruling on the principle of whether a government department which has lied once (or lied continiusly) and would be shown to have done so if it answered an FoI is thereby relieved of its duty to answer. I submit that it is not and thatb if the evidence it claimed once (or repeatedly) exists they have a legal duty to acknowledge that it doesn't and that while their claim did not in any way represent less than the normal (or highest) standard of honesty to which they aspire it was a deliberate lie.

I await your response.

In response to questioning his assertion that the Scots and Welsh are much more europhile than the English John Redwood dug out the voting record and came up with this answer.

I may be whistling in the wind here because that does look clear but I put up this answer which I am putting here because I think it is a useful analysis of our voting patterns and what to do about it.


Why does Scotland elect more europhile politicians if it is not more europhile? That is a reasonable question with complex and I admit not entirely satisfactory answers.
I suggest that “right wing” parties are generally seen worldwide as more patriotic than left wing ones & thereby increase their approval. This works for the Tories inn England but in Scotland and Wales the Tories, with their historic opposition to devolution, are sen as anti-patriotic to our local patriotisms. This tends to go in spades for UKIP. I don’t say that this is a correct view but politics is not always fair.
There is also the rather greater proportion of people in Scotland and Wales feeding off the government teat, who form the class & activist base of the Labour & Green parties. And to be fair, at least in Scotland, the Tories are more the traditional landed gentry, which does not go down well with most of us.
I suspect that SKY has less penetration here and thus the BBC’s monopoly position, as official state broadcaster, is more monolithic. Also newspapers to a greater (Guardian) or lesser (Mail) extent depend on government advertising and where the government is 60% of the economy it inevitably has massive control.
None of these however influence how we feel about the EU. Few people vote for a party because of one policy (in many cases policy is irrelevant and they simply vote Labour, or sometimes Tory, because they always have).
I regret that Murdo Fraser’s attempt to reform a free market party out of the Scots Tories and others failed. I think it would have solved the first of these problems. UKIP in Scotland could rename itself Scukip
More fiscal autonomy where the money government has to spend is directly connected to what it raises, rather than lobbying for a central grant, would help towards the second. It would also help in council politics.
Stringing everybody at the BBC from the nearest lamppost, or perhaps something less spectacular and legally requiring government advertising spending to be given proportionately to the paper’s relevant demographics would solve the 3rd.

My original remark about Scotland not being more europhile, or at least not "significantly" so was


I am not convinced we Scots are significantly more enthused of the EU than England. We are dominated by a political elite which is even more europhile than England’s just as it is more warming alarmist, statist anti-nuclear but that does not necessarily reflect the people’s opinion. There is also the fact that fishing, probably the industry most thoroughly wiped out by EU membership, is far more important in Scotland than England.
The position is also muddied by the SNP using membership of the EU as a safety net in the argument about the risks of quitting the UK & have this painted themselves into a Europhile corner. If I was running the Unionist campaign I would be playing heavily on the consequences of being directly in the EU without the various opt outs Britain negotiated on working time, immigration etc. 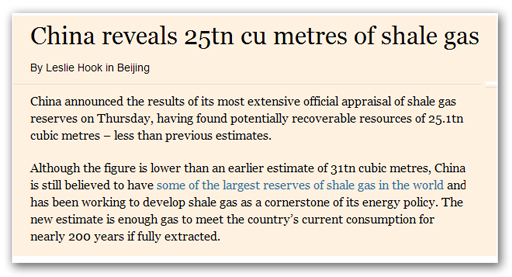 In Britain the ConDems are preventing the development of 0.15tn cubic meters under Preston - an amount of energy less than, but not much less than all the North Sea oil. They are doi8ng this specifically to prevent subsidised windmills being demonstrated as even more useless than they previously known.

China is not geographically unique. They have found this much gas because they looked for it. There is going to prove to be immense amounts of shale gas anywhere where the technology exists to look for it and where politicians, committed to Luddism and energy starvation, don't have the power to prevent it.

The politicians and eco-nazis have, for years, been telling us that "the era of cheap energy is over" and using that excuse so that these obscene thieving parasites can freeze pensioners to death because they know that their power over us depends on them pushing scare stories to keep us obedient.

In fact the era of cheap energy has not yet dawned. The only thing slowing that dawn is these traitors. "Traitor" is not too strong a word. Is there any reason to suggest that Guy Fawkes, Benedict Arnold, Kim Philby or any other official "traitor" was 1,000th as opposed to the best interests of his country as every single one of the corrupt thieving traitors who use ecofascism to weaken their own country?