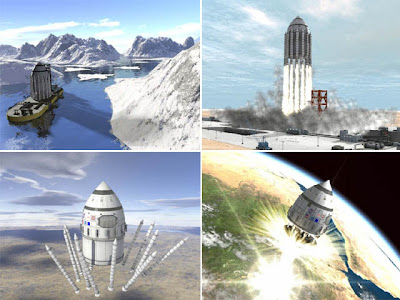 I have previously written about both nuclear pulse launching (Orion project) from the isolated Antarctic whose wind patterns would ensure no significant radioactivity could reach places where people live & the space elevator as inexpensive now feasible systems of getting to space.

In the previous article Dr Brad Edwards said an elevator could be done, if the will & $20 billion was there, in 12-15 years. This would require the manufacture of enough carbon fibres to make a very thin buckeytube 35,786 km(geostationary orbit height) & then bootstrapping larger threads up until we have an operating man ratable elevator. This would require 4 Saturn launches, or equivalent, to bring up the material. After which it is easy to haul up another such tube & build as many as there is demand for. Since it would mean a way to orbit intrinsically more efficient than flying to New York & the economic, let alone tourist, potential, of space (unlimited cheap solar energy, unlimited metals like steel, silver, platinum & gold, unlimited potential to produce the sort of materials we simply cannot produce because they don't mix or break apart in a gravity field) at that sort of price is unlimited I think we would see a lot of elevators after the first was done. If most of the population of Earth would like to holiday in space just once in their lives if it were possible then that would be but a fraction of the total demand.

So the bottlenecks are creating enough buckeytubes (my reading of the interview is that they are fixed together not made as one unit), and getting them up there.

By Edwards' timescale I cannot see the tube manufacturing taking more than about 1/3rd of the time - say 4 years. If government were to throw money at this it would likely be shorter, under 3. When compared to the share of GNP put into the Moon Landings (let alone Iraq) a few extra $billion to beef up the tube manufacturing is nothing & this is certainly a case where cutting a few years off the day when we can much more than double humanity's GNP looks like a remarkably good investment.

The other bottleneck is getting it there. Nuclear pulse rockets were proposed, after 1958 under the slogan "Mars by 1965, Saturn by 1970". They are after all simply very big old fashioned engineering. A pusher plate comparable to battleship steel & a few atom bombs set off underneath.

The "standard" design for an Orion discussed on Next Big Future is a 4,000 ton to orbit device which is considerably more than 4 Saturns. Perhaps there would be no public acceptance of continuous launching because of radioactivity (though since actual evidence all supports the hormesis theory of radiation damage & none of it supports the accepted no lower threshold theory, this is irrational - however it is politics). Nonetheless we are only talking about 1 nuclear launch from Earth to get it started. Launching once from South Georgia or the even more southerly Thule would not release significant radiation. I initially thought Thule would be impractical because it is volcanic but have since found that the Americans carried out Bomb tests on Amchitka in the Aleutians which is also volcanic without problems so Thule seems perfectly feasible & is even further south.

The timescale for such a launch need not exceed the 3 years for creating the buckytubes. That means we could have a very large geostationary vessel lowering its first filaments to the equator by 2013, assuming political go ahead tomorrow. Lets say full working order by 2015 since the orbital base will be substantially larger & better equipped than envisaged if put up by Saturn rockets. Even pushing up costs on tube manufacture it should not exceed the $20 bn price tag & indeed probably not exceed the $10 bn (£6 bn)(what we spend on "environmental" reports from only 1 government department of many, NERC, over 15 years) minimum projection Edwards made.

And once the Elevator is in place it can be used to "drop" vessels upward towards the other planets. Since they are not launched from earth but from much higher, even, than geostationary orbit, they can easily be powered by nuclear pulse. Mars by 2016, Saturn by 2017 then. And with that I wish you a good New Year & governments, somewhere in the world, willing to make a few resolutions in favour of progress. They need not be the big ones.