MMR - WHY THIS SCARE STORY IS TREATED DIFFERENTLY 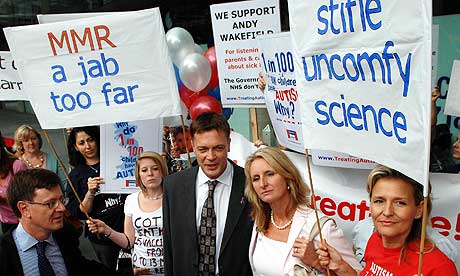 No opportunity has been lost to attack & now strike off Dr Wakefield whose findings of a link between the MMR vaccine & autism have led to a number of middle class people, probably including Tony Blair, stopping their children getting the government vaccination.

I don't know personally whether there is any case but Professor Brignal of Numberwatch seriously doubts it.

The author of the scare, one Dr Wakefield, blew his credibility at the outset in publishing by press conference a result based on just twelve cases. The subsequent contributions seem to combine the post hoc fallacy with ad hoc theorising. Unfortunately for the population at large, his opponents, the UK government, have also blown their credibility with their inept handling of such disasters as BSE, CJD and Foot and Mouth. The chattering classes are the ones who are opting out of the vaccination programme and, as a result, the first outbreaks of measles have occurred in widespread locations. What these people tend to forget is that it is not only their own families’ health they are playing with. An infected child is a danger to the likes of unborn children and vulnerable adults.

The General Medical Council, under all this pressure, decided to strike hiim off because

The doctor at the centre of the MMR controversy Andrew Wakefield was 'dishonest, irresponsible and showed callous disregard for the distress and pain' of children, the General Medical Council has decided.

Dr Wakefield abused his position of trust as a medical practitioner, failed in his duties and brought the profession into disrepute, the panel said.

In researching links between autism, bowel disorders and the measles, mumps and rubella vaccine he ordered unnecessary invasive tests on children without proper ethical approval.

He also failed to disclose conflicts of interest to The Lancet medical journal which published his findings that sparked the collapse in public confidence of the vaccine.

Dr Wakefield and two colleagues, Prof John Walker-Smith and Prof Simon Murch, are charged with serious professional misconduct over their research methods and face being struck off the medical register.

Politicians said the findings were damning and raised questions about research regulations.

However this is hardly the only dubious research ever produced. Indeed there seems to be a new one, or retread of an old one in the papers at least daily.

So what is the difference?

Well all the other examples have been used, by those in power to a greater or lesser degree. As Mencken said "The whole aim of practical politics is to keep the populace alarmed (and hence clamorous to be led to safety) by menacing it with an endless series of hobgoblins, all of them imaginary."

MMR on the other hand has been a scare which inconvenienced those in power.

Also looking at what he is specifically charged with - doing thorough tests without permission from "peers" & not disclosing links - the first is one which would give the scientific establishment power to veto any inconvenient research & is certainly inconsistent with any claim that he was not considerably more thorough in his research than in most of the above listed scares. The second is one that almost all researchers could be accused of, particularly where government has supported a theory. Both look like somebody searching for an excuse because no fraud can be shown.

How many such researchers have never received any government money (for example it has only been possible to find one scientist, worldwide, who supports catastrophic warming & isn't clearly government funded). Are we to see all scientists who have pushed warming or any of the other scares, supported by government & have not said at the top of their reports that they are writing this as government propagandists expelled by their professional bodies. Much though it appeals in cases like Paul Ehrlich who has made a lucrative career out of such scares, all proven wrong, I would not like to see this, at least not unless some actual fraud has been proven*.

But if so to strike off Dr Wakefield is not remotely proportionate. He is not being struck off for being proven wrong but for opposing the state decision on what officially "The Science" is. That is Lysenkoism - this lynching is incompatible with the scientific process. His may be bad research but it is certainly not worse than the sort the sort routinely demanded of government science "advisors". It sends a signal that nobody should ever risk even looking at any accepted theory sceptically in case they they think they find some contrary evidence & without scepticism science does not exist.


* instances where fraud has been found, eg "hide the decline" in the climategate emails.
** scares for which there is no evidence whatsoever eg that low level radiation is harmful
*** scares which have now been proven false eg the breast enlargement scare which George Moonbat dishonestly berated Michael Durkin for not supporting.

Comments:
Whilst you are no doubt correct about the MMR nonsense, I don't see this as a public health issue at all. Is it not a private health issue?

What I mean is, the only kids at risk from Measles are the ones whose parents are dumb enough to take this clown seriously. For my own son (born 2009) I looked at a meta-analysis of various studies and concluded MMR was fine. He is therefore immune from Measles and various other diseases (and not autistic). If every other kid in his class when he starts school gets Measles, it bothers me not one jot.

Therefore a private health issue, one the individual can absolutely control?

No - infectious disease is one place where the libertarian paradigm breaks down. As with nuclear reactions where a reaction depends on there being enough atoms that can be split by neutorns to release more, for an infection to become epidemic requires a high enough proportion of infectable people (I think about 20%). It is probably not a coincidence that the rise of socialism took place when large urban societies were being formed & infectious diseases being conquered. Equally its fall follows the conquering of such diseases (AIDS is argued as an exception but I am unconvinced it is infectious rather than lifestyle).