MONBIOT'S CLIMBDOWN OVER CRU FRAUD - IS IT SINCERE OR IS IT TACTICAL? 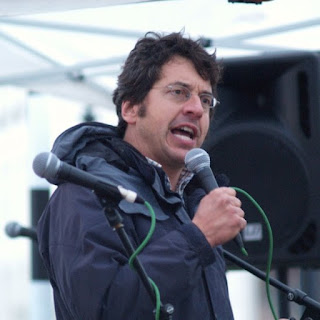 George Monbiot was fairly early, among alarmists, to say that the CRU had got it wrong & that prof Jones had to go. This got him some plaudits for having the guts to admit it but the alternative view that I hold is that it was simply an attempt at damage limitation. That he saw the CRU was bang to rights & had to be treated as merely a part of the warming scam, rather than the centre where all the world's data was collated & proved, allegedly, to show fast warming.

The response of the greens and most of the scientists I know is profoundly ironic, as we spend so much of our time confronting other people's denial. Pretending that this isn't a real crisis isn't going to make it go away. Nor is an attempt to justify the emails with technicalities. We'll be able to get past this only by grasping reality, apologising where appropriate and demonstrating that it cannot happen again.

My reason for thinking Monbiot is not sincere but merely being tactical this time is that he has behaved dishonestly & deliberately so on another instance in which he clearly thought, because it was not so high profile, he could get away with it.

When Martin Durkin's "Great Global Warming Swindle" came out Monbiot was in the Guardian several times to say why it should not be broadcast or why, after it had been, it should be ignored. Much of his argument consisted of ad hominum attacks on the programme's director Martin Durkin. This consisted of pointing out that on a number of previous occasions Durkin had produced programmes which he disagreed with & which, such is the way of the British establishment, had been criticised by the broadcasting standards authority. All of them were anti-Luddite & all were, at the very least, not shown to be factually incorrect in any serious way but one of his criticisms sticks out.

None of this, or subsequent distortions, stopped the channel from continuing to pay Durkin to pursue what looks like a personal crusade against science. In 1998, he hired a research biochemist and TV researcher called Najma Kazi to help him with a film for Equinox called Storm in a D-Cup claiming that breast implants are completely safe. After two weeks she walked out. "It's not a joke to walk away from four or five months' work," she told me, "but my research was being ignored. The published research had been construed to give an impression that's not the case. I don't know how that programme got passed."

Now he may be entitled to claim that there is a legitimate disagreement with him & his eco-pals over some of the subjects Durkin chose but over breast implants there is absolutely no dispute at all that the breast implant scare was stirred up by people like him, resulted in court cases costing $25 billion overall & that subsequent statistical evidence has proven it was wholly untrue.

Throughout the 1980s and 1990s, class-action lawsuits claimed that Dow Corning's silicone breast implants caused systemic health problems. The claims first centered around breast cancer, and then migrated to a range of autoimmune diseases, including lupus, rheumatoid arthritis and various neurological problems. This led to numerous lawsuits beginning in 1984 and culminating in a 1998 multi-billion dollar class action settlement. As a result, Dow Corning was in bankruptcy protection for nine years, ending in June 2004.

A number of large, independent reviews of the scientific literature, including the U.S. Institute of Medicine, have subsequently found that silicone breast implants do not appear to cause breast cancers or any identifiable systemic disease.

That it was a proven eco-fascist fraud, mainly in the US, is not well known here because it didn't get much publicity either before or after, but it is inconceivable that Monbiot, who had described his breast implant programme as "the work of a charlatan", did not know for a fact that the accusation he was making, of Durkin having been deliberately wrong on this scare, which Monbiot supported, was wholly & completely untrue. He banked, correctly, on most Guardian readers being ignorant & not knowing Durkin had been undeniably right on this (& probably right on each other instance in which they had disagreed). That is not how an honest man finding himself in error behaves.

Comments:
Thank you for a great explanation. I was looking online for a similar idea and really appreciate it
Happyroom2.com Tosstheturtle.net Catmariogame.com