Previously I discussed how it is possible to build space elevators in pairs by locating one north of the equator & the other south. It is also possible to put more than one at either end so long as the lateral pull is balanced.

This may not be a total solution because, as the map shows, not everywhere in the northern hemisphere is matched by a non polar land mass & the same applies in reverse to Brazil.

I can see 3 possible technical solutions to this.
1 - Tethering to Antarctica, or in Brazil's case, Greenland. This produces a tether leaving the ground at close to horizontal with added lateral pull.
2 - Anchoring it to the sea bottom or to an artificial floating island in turn anchored to the sea bottom.
3 - "Anchoring" to a ship permanently stationed with its engine permanently running to produce southward tension (possibly nuclear powered).

All 3 would certainly add significant expense & might be unfeasible.

Otherwise the best option is to anchor it on an island which makes a number of very small islands in the southern hemisphere into valuable real estate.

New England as far south as New York is matched by southern Chile. The Juan Fernandez Islands off Chile match a line running through roughly the Appalachian line. Easter Island matches a line through the mid west. The Galapagos, being on the equator cannot provide a match. West of Easter Island there start to be a number of very small Polynesian islands or even reefs matching points on the US & Canadian west coast.

Japan, Korea & coastal China, where almost all Chinese live, are matched by Australia, with Indonesian islands extending further west, though they may be to close to the equator. Central India is matched only by some islands in the Chagos archipelago

Southern Africa matches Europe from Western Russia, just short of Moscow as far west as the Berlin-Rome line. West of that there are 2 islands - Gough, a normally uninhabited island at 9.935 west whose longitude kisses points on the west coast of Ireland & St Helena 5.45 west which matches a line running through Spain from Cadiz, Penzance in Cornwall & ....

Another rant on the actions of the imbeciles who run Scotland & the LudDims. Again it relates to a recent news item

On June 13th Hayabusa [falcon] streaked through the night sky of southern Australia to deliver to Earth what researchers hope will be the first sample of rock collected from the surface of an asteroid.

As the picture suggests, most of the craft burned up on re-entry. But a small part, protected by a heat shield made of carbon-phenolic resin, survived and landed in the desert near Woomera. This capsule, it is hoped, will contain material from Itokawa, a half-kilometre-long asteroid whose orbit crosses the Earth’s.

One up, then, to JAXA, Japan’s space agency. Indeed, two up, because on June 10th it successfully deployed Ikaros, a solar sail attached to a small satellite in orbit round the Earth.

In the short term, the mission to Itokawa was the more spectacular of the two. It was dogged by bad luck, ranging from solar flares to boulder-strewn landing fields, and returned to Earth three years late. But return it did, having been nursed through its traumas by a patient ground team at JAXA’s mission-control centre in Tsukuba.

In the long term, though, Ikaros may be the more important mission. Solar sails are not the quickest way to travel through space, but they are cheap.

In 2002 in response to a LibDem request for ideas for an innovative (& relatively inexpensive) policy idea which would make a newsworthy debate at the Scottish conference, I proposed we call for Scotland to put up a £20 million X-Prize for the first probe to soft land on an asteroid beyond the orbit of Mars. Rather conservatively I suggested the prize last till 2050 amortising it to a very small annual cost, or of course, no cost whatsoever if it didn't work.

The party derisively rejected even discussing the idea on the grounds, so far as I could find, that it was "utter bilge. I don't think anybody will ever put up enough money to do such a thing. . . . all rather rot." To be fair no other British party has subsequently shown any more interest.

The £20 million I proposed awarding is much less than the £110 m the Japanese have spent but even so is, with hindsight, rather more than required.

Firstly because the Japanese mission, which involved returning a sample, is very much more complex & expensive than simply making the outward journey, as made clear here, though my initial proposal that it have to be an asteroid beyond the orbit of Mars (ie proving we can reach most of the asteroid belt) does bring in some extra difficulty as well as make it a more important achievement.

Secondly the point about X-Prizes is that they should not cover the entire cost of a project, certainly not at government work rates, but provide the seed corn to support something which pushes the technological envelope in ways that do have major economic spin offs but do not have sufficient guarantee of a large enough immediate return to first investors. It is difficult to give an exact figure of what proportion of total cost should be covered by a prize, though 1/3rd looks like the maximum which would fit the description. The only firm figure I can give is the one produced by the US army "For less than $10 million in prize money and expenses [specifically $3 million in prizes], the Department of Defense has created new technology that would have otherwise cost more than $100 million, and taken a lot longer to perfect." That would imply that Scotland could have attracted at least £660 million of spending for a £20 million prize, putting Scotland, alone, well ahead in competition with Japan. Of course if the Luddites had been right & nothing had come of it there would have been no cost either but this Japanese example shows that it is technologically feasible & very probably would have worked.

The incompetent blithering idiots running Scotland have wasted £41.3 marching up & down with their particular economically insane pork barrel project nominally to build a rail link to Glasgow Airport. For our £41.3 million they have produced absolutely nothing. Had they been willing to listen for slightly less they could have had both the rail link they said they wanted, about £600 million of investment & Scotland in a world leading position in an industry that is growing at 10% annually & about to change rather more than just the world.

This & yesterday's are 2 of my earliest proposals. I look froward to the continuing experience of telling those in charge "I told you so".

On the other hand, while I would like my own country's government to show a little commitment to progress there are a lot of other countries, or provinces or US states, which may do what our numptocracy would not. 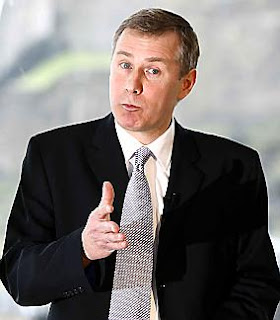