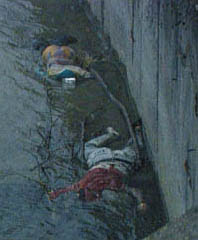 From the BBC (ok only their online ghetto):
"EU prosecutors have accused seven people, including doctors and a health official, of trafficking kidneys through a clinic in Kosovo.

International trafficking allegedly took place in 2008 at the Medicus clinic in the capital, Pristina...

The suspects are accused of trafficking in human organs, organised crime, unlawful exercise of medical activities and abusing official authority.

One is described as a "person that previously worked at a senior level in the Ministry of Health".

EU prosecutor Jonathan Ratel is quoted by AP as saying in the indictment that an "organised criminal group" had trafficked persons into Kosovo for the purpose of removing "human organs for transplant to other persons"...

Kosovo has been haunted by another alleged case of organ-trafficking dating back to the war in 1999.

In that case, which has never been proven, Kosovo Liberation Army (KLA) militants allegedly trafficked the organs of Serb captives they later killed."
=======================
I like the "never has been proven" line rather like saying Hitler has never been proven to have known about the alleged Holocaust. This is not surprising after all some of these thugs were already known to be involved in dissecting Albanian adults & indeed babies before NATO recruited them as "freedom fighters" let alone before they were reclassified as "police" when NATO occupied Kosovo.

There has been much faux concern in our media about Bush's waterboarding of 3 top terrorists to get information from them. Dissection while alive is undeniably far more damaging than the relatively mild torture of waterboarding - at least 100 times worse. The fact that the Serbs our police murdered were innocent makes it at least 10 times worse than doing it to terrorist leaders. The numbers are, at the very least, 430 greater (this is ignoring the "ordinary" genocide our political leaders sent out "police" to do). Thus we can say with certainty that if the western media is honest it has given 430,000 times more coverage than the 2,751 mentions of the waterboarding.

And if our entire "journalistic profession" are only 99% corrupt that will be 4,300 mentions.

And if they are only 99.9& as corrupt as the German media under the late Dr Goebbels (who censored reports of Auschwitz) then that would be 430 mentions.

And if so many as 1 in 10,000 journalists worldwide is honest then that will be 43 news items reporting it.

And if. as a statistically undeniable mathematical fact, a single one of the 24,038 BBC employees (or proportionally among other "news" media) isn't an obscene, lying, genocidal, Nazi piece of filth personally willing to censor anything or lie in any way to assist in racial murder that would be 19 mentions of this atrocity in the English speaking world's media.

The true number today is 6 (though there is another not in English picked). Remember that next time some obscene animal on the mainstream media say we must remember the Holocaust to prevent it happening again.

PE This is a letter I sent to the entire UK & much of the American media. All these obscene Nazis decided to censor it.

"Sir,
Isn't it interesting that George Bush's admission that he authorised waterboarding of 3 terrorist leaders who were certainly involved in atrocities & whose interrogation almost certainly saved many lives gets front page & 1st item on the news coverage.

Compare & contrast with the fact that the British & other NATO governments have known & authorised our police (formerly our KLA allies) to engage in massacres such as the 210 innocent unarmed people murdered in the Dragodan Massacre outside our military HQ in Kosovo, the ethnic cleansing of 350,000 people from that province, the kidnap & sale of 10s of thousands of schoolchildren to western brothels & the dissection, while alive, of at least 1,300 Serbs to provide body parts for western hospitals (something which is still going on). These atrocities have obviously, never had 1/1,000th as much media attention as these 3 waterboarding cases in the British media. If that is not deliberate censorship, comparable to anything Dr Goebbels authorised there must be some reason why the human rights of 3 terrorist leaders are thousands of times more important than those of hundreds of thousands of innocent Serbs. Perhaps the editor could enlighten us."

EPDATE A rather, not enormously, more informative treatement by al Jazeera