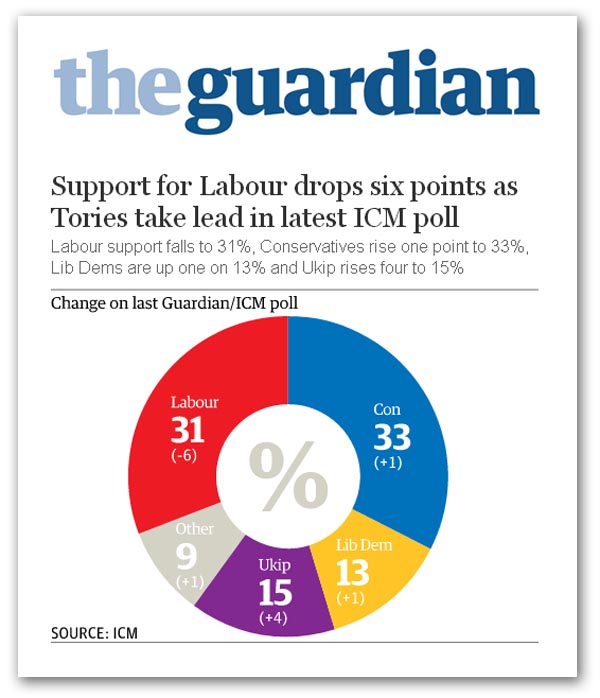 
One might think, looking at UKIP's 15% that should be worrying but I am very pleased with this.

Labour's vote is falling. As the economy "recovers" (still only half world average growth despite it being fuelled by an artificial house cost boom) and equally, as we get nearer the fateful moment of an election, where being against the government really could put the other rascals in, we can only expect the Labour vote to fall.

At 31% Labour cannot reasonably be expected to produce a majority.  Their policy seems to have been to hope for 35% and thus over 50% of seats but at 31% almost any parlay of votes leaves them in a minority.

Because of our corrupt electoral system the Tories won't either. Indeed on the shares in the chart Labour will be the larger party - Tories 284, Labour 307, LDs 31, UKIP nil according to Electoral Calculus

On the face of it that looks bad for UKIP. But -

It spikes the Tories greatest, argument against us. Indeed the only one they have been using. The "if you vote UKIP you will put in Labour" one. Labour aren't going to be in. The people, including their core voters, have recognised how crap they are.

Now the Tories don't have to fear Labour - and I am quite certain that even most Tory party activists would rather have UKIP's policies than their own party's (mass immigration, EU membership & gay marriage).

And Labour voters are also free - to vote against a party who have nothing but contempt for their voters, and secretly promoted mass immigration to replace them.

We are very close to a tipping point. Suppose UKIP picked up 6% from each of these parties.

Now this takes no account for targeting of winnable seats which UKIP is doing for the first time so almost certainly understates the UKIP and LibDim votes but you get the picture.

Another regular factor in elections has been a swing to the LDs during the campaign because they got little TV coverage at other times, but they could not be denied coverage during actual election campaigns. This, obviously, applies in spades to UKIP.

History also shows that Tory voters have less tribal loyalty to their party than Labour which is why elections against a Tory government have generally been more successful for the LDs than ones against Labour. Disaffected Labour just stayed home.

And the EU elections

So a 6% reduction for each of these parties - to UKIP seems not merely possible but quite likely.

Comments:
woow cool article, no one else I spend the time to read and see-saw this article, I may take a little longer to read. good luck. but should not I share information such as the following information penyebab kemandulan cara mengobati gejala stroke pengobatan The article is an article that discusses the health problems of the body. cara menyembuhkan maag kronis cara menyembuhkan katarak The article just now is also the same article, but there is a solution for treatment. gejala cara mengobati kanker payudara gejala cara menyembuhkan usus buntu Articles such as this I created to share information that might be useful for everyone obat gangguan fungsi hati cara mempercepat proses pembakaran lemak I created because I wanted to give something to someone else that might be useful. And indeed for mengapai that is all I have to try harder.