Ann Coulter (who traced the smear stories against Cain back to Obama's minder and who supported Romney from the first) gets it right again. This time over the war against Libya and the current one against Syria, both fought to put our "democracy loving" al Quaeda friends in power.


Obama said: "We must stand alongside those who believe in the same core principles that have guided us through many storms ... our support for a set of universal rights, including the freedom for people to express themselves and choose their leaders; our support for the governments that are ultimately responsive to the aspirations of the people."

The Libyan mob was the equivalent of our founding fathers! (If you overlook the part about it being a murderous Islamic mob.)

Meanwhile, Michael Scheuer, former head of the CIA's Bin Laden unit, said: "The people we are fighting for in Libya, the backbone of that movement, are former mujahedeen from around the world." We are "enabling people who may not be formally aligned with al-Qaida but who want the same things to grasp ever closer to power."

Scheuer said the media had taken "a few English-speaking Arabs who are pro-democracy and a few Facebook pages out of the Middle East and extrapolated that to a region-wide love of secular democracy," adding, "It is as insane a situation as I've ever encountered in my life."

No wonder Obama's running for re-election on his foreign policy expertise!


Among Republicans, Newt Gingrich, Sarah Palin, Mike Huckabee and Rick Santorum all called for aggressive action against Gadhafi, including enforcement of a no-fly zone.

Santorum cited Reagan's 1986 bombing of Libya (after Gadhafi had killed American servicemen in Berlin), saying, "If you want to be Reaganesque, it seems the path is pretty clear."


Gingrich took all sides, first demanding: "Exercise a no-fly zone this evening. We don't need to have the United Nations. All we have to say is that we think that slaughtering your own citizens is unacceptable and that we're intervening. This is a moment to get rid of him. Do it. Get it over with."


Then, two weeks later, he said: "I would not have intervened."

Only Mitt Romney and Haley Barbour resisted calling for aggressive action against Gadhafi, with Romney merely criticizing Obama's deer-in-the-headlights response, and Barbour stating more directly, "I don't think it's our mission to make Libya look like Luxembourg." No offense, he said, "but it is not ever going to look like what we'd like." ..

Learn your history, Americans. The American Revolution was not the revolt of a mob. It was a carefully thought-out plan for a republic, based on ideas painstakingly argued by serious men in the process of creating what would become the freest, most prosperous nation in world history.

The much-ballyhooed "Arab Spring," with mobs of men gang-raping American reporters, firing guns in the air and murdering their erstwhile dictators, is more akin to the pointless bloodletting of the French Revolution.

I think she may be overplaying the insanity of the mobs. There is also the fact that people chosen by the western powers as catspaws are inherently unlikely to be self effacing uncorrupt patriots. We recruited gangsters, drug lords, sex slavers and organleggers in Kosovo as our police. They cannot honestly avoid responsibility for them now being gangsters, drug lords, sex slavers and organleggers. We recruited the openly corrupt in Iraq and Afghanistan and got corruption. We recruited al Quaeda in Yugoslavia, Libya and Syria and again that is what we are getting.

As, unfortunately, are the peoples of these countries More our fault than their's.

But if she is right to blame Obama for warmongering remember that he had to be dragged into a relatively background role in the war against Libya (providing most of the military capacity while Britain and France provided the bluster). The real enthusiasts for bombing Libya were Sarkozy (gone) and Cameron. If Obama is shown to be an ass what is Cameron?

Remember when the  war against Libya was justified by a UN ruling which claimed it gave us some temporary claim to prevent Gadaffi defeating the "democratic" forces in Benghazi, which we parlayed into thousands of civilians bombed elsewhere.

These oppressed destroyers of war graves . 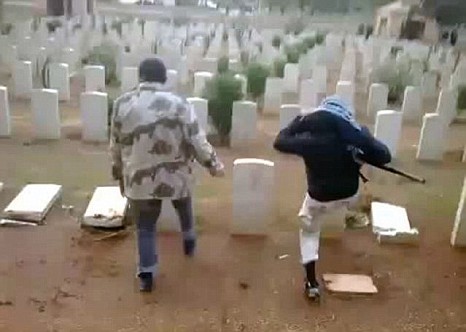 & ended the oppression of the US ambassador, well this one anyway and are disappearing so many Gadaffi supporters/members of other tribes.

Comments:
I wasn't just the USA who played the giddy goat over Libya: so did France and Britain, from whom one might reasonably expect something more intelligent than one does from the USA.

What the devil was it all about?

Bombing small countries, with TV images of the explosions on prime time is the modern, more bloody, equivalent of gladiatorial games.