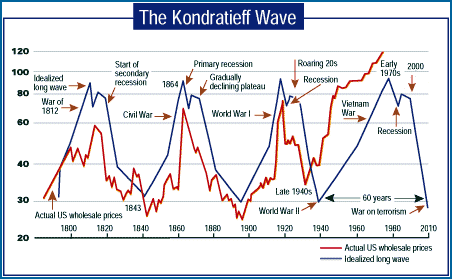 A couple of interesting articles at Next Big Future here and here from Joseph Friedlander on Dr. Bruce Cordell 's theory, looking at Kondratieff waves, that we are due a major economic boom starting about 2012.

Kondratieff waves are a claimed regular (55 year cycle) of innovation. I don't take it as being that predictable. At best, if you watch natural waves coming in at the sea shore you will see that some waves are larger, some almost non-existent and some arrive a little earlier or later than expected. Nature, not being a machine, is more messy than we pattern forming folk living in a mechanical society are comfortable with.

Nonetheless there does seem to be validity to these cycles. Dr Cordell describes the cause as periods of enhanced ebullience, which he calls a Maslow window (after orbital launch windows - because if you miss they they are gone).


About twice per century over the last 200+ years there are extraordinary pulses of great explorations (e.g., Lewis and Clark) and macro-engineering projects (e.g., Panama Canal) that resonate around the world. These “Maslow Windows” are times of extraordinary affluence-induced ebullience similar to “animal spirits” theorized to drive business cycles by British economist John Maynard Keynes in the 1930s. In response to ebullience, many in society ascend Maslow’s Hierarchy and, as their world view expands, find that great explorations and MEPs are not only intriguing, but seem momentarily irresistible. This captivating, but short-lived ebullience is triggered by major, twice-per-century economic booms over the last 200+ years that were first described by Kondratieff in the 1920s.

Purely personal and anecdotal but I do get the feeling that, popularly rather than governmentally, we are entering such a period. People are starting to be willing to optimistic scenarios - that we aren't expecting catastrophic warming; that new technologies can do amazing things; libertarianism - all of these are far more acceptable than even a couple of years ago as Ron Paul's success testifies. I remember the 1970s when the opposite was very much the case - as the success of Paul Ehrlich with his long list of transparently ridiculous disaster claims proved. Pournelle has talked of audiences drowning him out when he told them we weren't doomed, which is something one might expect them to be glad to hear.

Wouldn't take such cycles too far - if true China has been at the top of its own cycle for 30 years. But well worth watching. There certainly are more than enough new technologies available to provide real growth if we are allowed, or have the confidence to allow ourselves - space development; Moore's Law of computers actually speeding up*; GM crops; shale gas; nuclear power; modular building; "cold fusion"; seasteding - each of which has the potential to cause the equivalent of the industrial revolution.

Both of the articles are quite long and complicated and well worth the time. Here are a couple of comments I have added.


May I suggest that the cause of such cycles ending cannot be an inherent loss of investment resources since by definition the overall economy has grown in the growth phase. What could happen is that the parasites grow faster than the wealth creators. Historically that could be anything from ne4ighboiring tribes looting the cities of ancient Mesopotamia; the growth of an ever more useless and parasitic aristocracy under Louis XIV the Sun King; to the current state parasitism where tax takes about 50% of the economy and regulatory controls (nuclear regulations, housing restrictions, environmentalism etc) destroy at least 50% of the possible economy reducing what people really get to 25% of the optimum.
Modern governments can afford to extract more than barbarian hordes and absolute monarchs because there is so much more existing now but this in turn means that the potential for growth without the parasitism is very much greater than ever before. This growth in state parasitism may also explain what economists call the "productivity paradox" - that the doubling of computer capacity every 18 months has not improved growth rates (at least not in the "developed" countries though the number of countries achieving 10% annual growth is unprecedented elsewhere.

It may well be that success in a Maslow window attracts war.
A significant reason for British and French enmity to Germany before WW1 was that Germany's economy was growing faster than their's. Paradoxically this was also a reason for German enmity to Russia at the same rime since Russian industry was growing fast, albeit from a low rate. In WW2 a major cause of enmity towards the USSR was that it, during the 1920s & 30s, had a remarkable growth rate. Hitler in particular thought that if Germany didn't take Russia's resources (lebensraum) by the 1940s they would become a resource poor backwater (wrongly as post war history showed). The enmity between the northern and southern states of the USA in the 1850s was also fuelled by the disparate growth of the north.
On the question of whether war can have technologically beneficial results I think there is some reason to say yes. Governments waste enormous amounts of productive wealth during wars but they waste it during peace as well. The difference is when there is an existential threat to the state (ie a war more serious than Vietnam) government becomes willing to spend some of those resources on promoting innovation and that is enough. The common explanation for the US getting out of the Depression is wartime spending but if that, alone, were true then when the war was over it would have sunk back into an even deeper Depression. Instead the inventions and infrastructure built to stop the Wehrmacht marching up Pennsylvania Ave made everybody rich.
Compare the literally trillions Obama has put into "stimulus" projects, all of which has gone to cronies or old industries, with the refusal to put anything into X-prizes. 1% of that money put into prizes would have developed a lot of space industry by now and more than ended recession but, without an actual existential threat government has no incentive.
It was only when the USSR collapsed of its own governmental parasitism that the western governments fully adopted the current "environmental" Luddism which has brought us into the current recession - the competition of a rising China is thus good for humanity & probably the average US citizen

This links to Dr Cordell's site - again worth following.

* Finally here is Wikipedia on what is called the "Productivity Paradox" - that, at least in developed countries the massive increase in computer capacity (the Moore's Law doubling time of capacity now reduced to about a year) has not been accompanied by an increase in productivity. The obvious answer, which has escaped the official experts, being that this has allowed and been swallowed up by a matching increase in government parasitism. The possibilities, if we do not let government parasites steal this window from us are without parallel in human history. If we let them the possibility is comparably dire.

UPDATE Dr Cordell has put down a comment which I wish to add here:


1) On the above comment, not all explorations that are great are "Great Explorations". Great Explorations always have an international audience that's riveted.
A classic example of an exploration that was great (but not a GE) was a Howard Hughes-like character of the 1800s named Clarence King. The Yale-educated socialite was friends with President Adams, a great explorer of the American West including exposing the Great Diamond Hoax of 1872, and the first director of the US Geological Survey (1879), and yet he is almost unknown today. Compare his celebrity with Dr. David Livingstone ("Dr. Livingstone I presume.") who explored during the mid-19th century Maslow Window and is still a minor pop culture icon even today.

and
2) I initially noticed that the Great Explorations, MEPs, and major wars lined up very well with the Stewart Energy Cycle (it was later that I noticed it also worked well with K-Waves etc.), which is a very well-documented societal energy use cycle that was discovered in 1989 by the prominent nuclear engineer Hugh B. Stewart. You can see the cycle in my ISDC presentation for 2011 -- http://21stcenturywaves.com/the-articles/ It's 3rd from the top on the page."

I assume the immense interest in space exploration from the Sputnik moment to the Moon landings, followed by coverage of later landings allegedly not displacing reruns of I Love Lucy as examples of lack of interest after the Maslow Window closes. Admittedly Sputnik and the Moon landings were more important but not that much so. This would suggest that another reason for the window closing, apart from increased (government) parasitism is that we humans just get bored with success. Such boredom doesn't make much sense but experience supports it. - Neil

Comments:
"extraordinary pulses of great explorations (e.g., Lewis and Clark)": I know it's a side issue, but you mustn't take American foundation myths at face value. Spaniards had already crossed the mountains to the Pacific - they discovered San Francisco Bay by land, you know, not by sea. McKenzie had already penetrated to the Pacific at Canadian latitudes. The Lewis and Clark expedition was, no doubt, important to the USA, but the idea that it constituted "great" exploration is a distinctly far-fetched.

Hi Neil,
Thanks for your post on Maslow Windows.

A classic example of an exploration that was great (but not a GE) was a Howard Hughes-like character of the 1800s named Clarence King. The Yale-educated socialite was friends with President Adams, a great explorer of the American West including exposing the Great Diamond Hoax of 1872, and the first director of the US Geological Survey (1879), and yet he is almost unknown today. Compare his celebrity with Dr. David Livingstone ("Dr. Livingstone I presume.") who explored during the mid-19th century Maslow Window and is still a minor pop culture icon even today.
and

2) I initially noticed that the Great Explorations, MEPs, and major wars lined up very well with the Stewart Energy Cycle (it was later that I noticed it also worked well with K-Waves etc.), which is a very well-documented societal energy use cycle that was discovered in 1989 by the prominent nuclear engineer Hugh B. Stewart. You can see the cycle in my ISDC presentation for 2011 -- http://21stcenturywaves.com/the-articles/ It's 3rd from the top on the page.

Thanks - Ive added your reply & a comment under the main article.

I know there will be many difficulties and challenges but I am determined to do it. If it does not succeed then it will be a lesson for me as well
http://run3play.com