The Empire on which the Sun Never Sets Feeding the World

I did previously mention the possibility, taken from Marshall Savage's book The Millennial Project: Colonising the Galaxy in Eight Easy Steps that we can build floating cities in equatorial water, powered by Ocean Thermal Energy Converters (OTECs) (basically using the heat differential between surface water and the 4 c water below 3,000 ft). A side effect of that is bringing up nutrient rich bottom water which can grow plankton, fish, beef or however far up the food chain you want to go or could do the same to with oil producing algae.

It is certainly a feasible idea and is being considered


the grand vision of Japan’s Shimizu Corporation goes way beyond harnessing green energy at sea for use in cities on Terra firma – it takes the whole city along for the ride. The company, along with the Super Collaborative Graduate School and Nomura Securities, is researching the technical issues involved in constructing its Green Float concept – a self-sufficient, carbon-negative floating city that would reside in the Equatorial Pacific Ocean.

And by individuals like John Craven (no not the British one)


it's already won $75 million from Alpha Pacific, a Memphis, Tennessee, venture capital firm, and $1.5 million in federal funds. Craven hopes that within a year, bulldozers will begin clearing land on Saipan and engineers will start sinking a pipe to pump icy water from the ocean depths to produce electricity and freshwater. And back in Kona, Craven expects to use cold-water agriculture to transform five acres of otherwise barren lava fields into the world's most productive vineyard. "The economics are absurd," he boasts. "Once we prove the technology on Saipan, imagine what it could do for places like Haiti!"
Craven's system exploits the dramatic temperature difference between ocean water below 3,000 feet - perpetually just above freezing - and the much warmer water and air above it. That temperature gap can be harnessed to create a nearly unlimited supply of energy. Although the scientific concepts behind cold-water energy have been around for decades, Craven made them real when he founded the state-funded Natural Energy Laboratory of Hawaii in 1974 on Keahole Point, near Kona. Under Craven, the lab developed the process of using cold deep-ocean water and hot surface water to produce electricity. By the 1980s the Natural Energy Lab's demonstration plant was generating net power, the world's first through so-called ocean thermal energy conversion.

"The potential of OTEC is great," says Joseph Huang, a senior scientist for the National Oceanic Atmospheric Administration and an expert on the process. "The oceans are the biggest solar collector on Earth, and there's enough energy in them to supply a thousand times the world's needs. If you want to depend on nature, the oceans are the only energy source big enough to tap."

The main problem with extensive use is the legal position of such floating cities is not defined in international law and investors are understandably unenthusiastic about investing the odd billion in something , no matter how good the investment return, that they may have some problems maintaining ownership of. 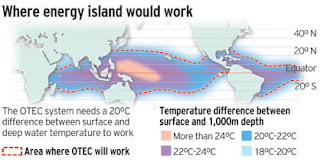 Britain has considerable experience of both and is a big enough nation, still, that our flag ownership would be accepted internationally. We also, have experience of being the sovereign of record of small societies and of running them successfully in both the colonial and post colonial world. The Cayman Islands and Bahamas are both British colonies, which provides them with stability and credible financial centres while we know how not to micromanage, something which might make a British floating colony more attractive than a US one for example. Most enthusiastic seasteaders see being free of government as being a major purpose, but the inability to provide legal security is an automatic result of such independence. However few libertarians could hold up the Bahamas as a victim if imperial oppression.

Indeed the very fact that Britain exists largely offstage has ensured that their politics has not been subject to violence. History does not show that local rulers are always more supportive of freedom than those far away, indeed the opposite could be argued as more common.

So what would Britain get out of putting floating libertarian seasteads under her imperial wing. Well firstly we could make it a condition of stationary vessels bearing the British flag that they be built in Britain. This would mean, without the £5 billion put into building aircraft carriers, indeed with no government money at all, we would keep shipyards open. That is no small thing. There is also a considerable amount of prestige from having what, if the examples of Singapore and Hong Kong are any basis, are likely to be some of the world's most innovative societies. Perhaps even more form producing, as a byproduct, enough food to feed the world form British territory. Cynocally perhaps even more than that from being the world's primary oil producer. I think it would also be legitimate for the UK to keep some minor tax, perhaps stamp duty (or tea), to be put into paying for the navy. Mark Wadsworth's hobby horse is Land Value Tax - because that tax does not distort the economy because the land supply is fixed. Floating Islands are, not subject to that limitation so perhaps he will be best placed to offer an alternative.

With each seastead having the right to produce its own constitution we would see social science really becoming something close to an experimental science. That might prove as important to humanity as the ability it would give to feed the world.

All that is required is passing an Act in Parliament. If the seasteads I predict don't happen then nobody loses. If they do everybody wins. What downside would there be to not passing such an Act apart from the civil service rule that nothing should ever be done for the first time?

Comments:
There is such a thing as water-based LVT. Let's imagine that Navy vessels from Country X only protect ships from pirate attacks if those vessels are registered in and flying the flag of Country X.

Therefore, flying the flag of Country X has a value to the ship owner, and as long as Country X charges less for that privilege than an insurance company would charge for full cover, then what you pay for the right to fly the flag is effectively LVT.

Similarly, Country X will only pay for a Navy to the extent that the cost of it is less than the amount it can raise from "flag duty".

Clearly, larger and civilised countries are allowed to make economies of scale by clubbing together and defending each others' suitably-flagged vessels and splitting up the costs and proceeds somehow.