£10 Billion Gas Back-Up for £100 Billion worth of Windmills because they don't work. But Even Gas is a Rip Off

The government have belatedly noticed that windmills don't work all, or even most of the time. So with a plan to provide 1/3rd of our electricity by windmills (17 gigawatts) they have come up with a back-up plan. Back-up gas generators. As Chris Booker and others report


Centrica and other energy companies last week told DECC that, if Britain is to spend £100 billion on building thousands of wind turbines, it will require the building of 17 new gas-fired power stations simply to provide back-up for all those times when the wind drops and the windmills produce even less power than usual.


We will thus be landed in the ludicrous position of having to spend an additional £10 billion on those 17 dedicated power stations, which will be kept running on "spinning reserve", 24 hours a day, just to make up for the fundamental problem of wind turbines. This is that their power continually fluctuates anywhere between full capacity to zero (where it often stood last winter, when national electricity demand was at a peak). So unless back-up power is instantly available to match any shortfall, the lights will go out.

These 17 new gigawatt stations will thus be able to produce all the electricity the windmills are supposed to, revealing that it is acknowledged that sometimes the windmills will produce none and are thus a complete waste of the £100 billion (official current price promise) they  cost. 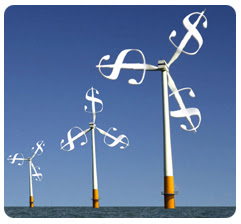 However lets look further into this. The AP 1000 nuclear plant costs "AP1000 ..... $1000 per KW construction cost and 3 year construction time" (also discussed here) when ordered in volume. $1 bn is £600 million so 17 of them cost exactly the same as the £10 billion worth of gas generators backing up the £100 billion worth of windmills. However the gas generators require large amounts of fuel (gas) which makes up the large majority of costs whereas nuclear fuel is a tiny part of the total cost (most of the cost being satisfying government regulations and levies).

More proof that 93% of the cost of electricity is political parasitism. Not only are these politicians thus responsible for most of the 25,000 annual deaths from fuel poverty, 2/3rd of electricity use is non-domestic and this is most of why our industries are being driven to China and other relatively honestly governed countries while we remain in recession.

British "production of electricity was 393 TWh in 2004" but " declined 11 % in 2009 compared to 2004". Since electricity use is closely related to GNP this explains why we are in recession, despite the entirely artificial "growth" of the Labour years based on borrowing on artificially inflated house prices.

.  which comes to £58 billion. which is 4.1% of GNP. 93% of that is 3.8% of GNP. Remember that nearly 50% of GNP is already officially government spending, which has a net negative effect on national wealth. None of the 3.8% counts as tax though it is all taken from us by government regulation. So even if government spending has "officially " been reduced below the 50% figure in fact it is above it.This is purely money taken from us. It takes no account of the 50% overall reduction in national wealth caused by a variety of government regulations, including the secondary effects of high power costs.

The good news is that from all this it is obvious that if we drastically cut the amount stolen by government parasites and allowed a free market to allocate resources we would certainly achieve a growth rate matching or more likely considerably exceeding China's 10%.

I wish there was a member of the Conservative Party who was willing to say that the insistence of their present leadership in continuing the recession, when they know perfectly well how to get out of it, is not only not in the interests of the country but not even in the interests of the party. Better to be out of power, rid of cameron, rid of the LudDims and able to produce worthwhile policiess while letting Useless Ed take the helm for some months.