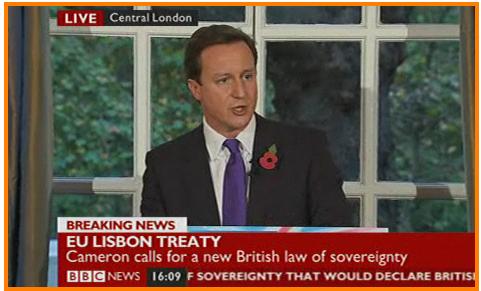 
In first place I'm awarding Nick Robinson, BBC's Political Editor, and Tom Bradby, his successor at ITN. Bradby, in particular, led the reporting of DD's conference speech. It bombed and it bombed badly he told the public (an interpretation that still infuriates the Davis-ites). These two talking heads - and the production/editorial teams behind them - had big influences on this contest and will continue to be very big players in politics for the next few years (at least until the blogosphere really hits its potential heights).

The event I remember is watching BBC's Newsnight broadcast a focus group which was said to be seeing what popular reaction would be to each candidate. Cameron, up till then a virtual unknown "who he" candidate who had never served in government got a tremendous "wow" review and the Conservatives were effectively told that only he could appeal to anything close to a majority. Since this came out just before the party conference its influence cannot be underestimated. This is from an Observer (ie the pro-BBC Guardian on Sunday) article on the subject:


Through no fault of his own, show-business made Cameron leader of the opposition. David Davis had the strongest base among activists and MPs. The opinion polls declared Kenneth Clarke the frontrunner among the wider public. Neither man was a clear election winner, however. Cameron came from nowhere because Newsnight commissioned a focus group run by American pollster Frank Luntz that appeared to prove that the young politician could become extraordinarily popular and the Conservatives believed him. The desperation of the Tories in 2005 produced an election without precedent. The findings of a focus group drove a hitherto obscure politician to the leadership of a major political party. Not a focus group hired by party managers anxious to uphold the best interests of their cause, but by a broadcaster as interested in entertainment as reputable market research.
By the standards of the old-fashioned journalists who looked down their noses at Frost, Luntz was an astonishing pollster for Newsnight to commission. He had spent much of the previous decade helping the Republicans find smarmy ways to spin tax cuts for the rich and dismiss global warming as scaremongering....

Add to that the reprimand Luntz received from the American Association for Public Opinion Research for his unsubstantiated claim that 60 per cent of Americans supported the Republicans' Contract with America and you seem to be left with a mediocre propagandist the BBC would never allow near its programmes in normal circumstances.

.... frequently getting called in by the networks to offer colour commentary on politics even when he has no poll to cite'. Producers feted Luntz because he gave television what it wanted: strong opinions expressed with absolute certainty in a populist style....
But British pollsters tell me that Luntz's work for Newsnight shouldn't have been allowed to influence a parish council election, never mind the future of a great party. If you can't follow their case against him, their overall explanation is easy to grasp: a well-run focus group could never fill 15 minutes of airtime. It would be too boring. To begin with, standard focus groups have six to eight members, but a handful of people isn't an impressive sight on television, so Newsnight had Luntz meet 28 voters.

Focus groups are also meant to be focused. Market researchers want volunteers from a similar background so the guinea pigs will lose their inhibitions about speaking freely in front of strangers. But Newsnight mixed up people who had always voted Tory with people who had once voted Tory and people who had never voted Tory. The danger of a large and diverse group is that the loudest voices will dominate and a herd mentality will take over. Watch the footage that made Cameron leader and you will see that's what happens as the dynamics of crowd psychology convert everyone in the room to his charms.

The standard way to stop easily impressed interviewees going along with the crowd is to have secret ballots. Luntz and Newsnight didn't use them because a show of hands looks better on TV. After they hear Cameron saying he wants to appeal to people's hopes rather than their fears, the reaction of the voters on dinky hand-held dials that measure their instant responses was overwhelmingly positive. But they would have been as pleased if you, I or our next-door neighbours had said the same, which is why serious researchers are wary of instant reactions. I could go on, but the big point is that Newsnight produced infotainment, not research.

I'm not suggesting a conspiracy....

Maybe a Guardianista isn't but it certainly fits the facts. How often do the BBC hire somebody who has made his career promoting the Republicans, tax cuts and opposing global warming? It may have happened some other time but I don't know of any. Frank Luntz must have had some quality the BBC desperately wanted.


In 1997, he was reprimanded by the American Association for Public Opinion Research for refusing to release poll data to support his claimed results "because of client confidentiality"....

In 2000 he was censured by the National Council on Public Polls "for allegedly mischaracterizing on MSNBC the results of focus groups he conducted during the [2000] Republican Convention." In September 2004, MSNBC dropped Luntz from its planned coverage of that year's presidential debate, following a letter from Media Matters that outlined Luntz's GOP ties and questionable polling methodology.

It has regularly been said that Cameron has "captured" the Conservative party but isn't a Conservative. He is certainly committed to the BBC political agenda of catastrophic global warmism, windmillery, eco-fascism, support of the EU, "centrism", not allowing referenda or even real debate, the pseudoliberalism that the Beeboids falsely call "liberalism" and not seriously reducing the size of the state (of which the BBC is a loyal part) even in the face of economic collapse.

Were the BBC aware of all this when they hired somebody with a history of polling fraud to run a clearly fraudulent poll to promote Cameron? Because if they were then there was a conspiracy.

As a leader Cameron has certainly not shown the ability to attract voters promised. I have elsewhere expressed the opinion that he could have walked to a massive victory in the election


Before the election I said that Cameron's 3 major mistakes were - climbing on the catastrophic warming bandwagon just as the wheels were coming off; ignoring the economy for years to concentrated on "detoxifying the brand"; refusing UKIP's offer to stand down if they promised a referendum (again).

I have seen no reason to change my opinion that if he had got even 1 of those 3 right the Tories would have had a majority.

All of these are, of course, things that fit the BBC agenda perfectly. He also has the advantage that his career history is entirely in broadcasting, PR and Westminster rather than anything where he might have picked up any non-Beeboid influences. He has also been able to change the party logo from a Union Jack to a tree and to halve the size of Conservative party membership since he came to the leadership.