FIGHTING FOR DEMOCRACY IN LIBYA - WELL??

A bit of history I suspect Cameron and Obama are entirely ignorant of and Sarkozy may be.
Libya has a history of being seen as an easy target for politicians looking for a short victorious war.

The History of Libya as an Italian colony began in the 1910s and lasted until February 1947, when Italy officially lost all the colonies of the former Italian Empire


The Italian colonization of the Ottoman provinces of Tripolitania and Cyrenaica was not initially successful and it was not until the early 1930s that the Kingdom of Italy took full control of the area.[1]


On October 3, 1911 the Italians attacked Tripoli, claiming to be liberating the Ottoman Wilayats from Constantinopole's rule...

the Ottoman sultan ceded Libya to the Italians ... Tripoli was largely under Italian control by 1914, but both Cyrenaica and the Fezzan were home to rebellions led by the Senussi.

On 25 October 1920, the Italian government recognized Sheikh Sidi Idris as the hereditary head of the nomadic Senussi, with wide authority in Kufra and other oases, as Emir of Cyrenaica, a new title extended by the British at the close of World War I. The emir would eventually become King of the free Libyan state...

From 1922 to 1928, Italian forces waged punitive pacification campaign. Badoglio's successor in the field, Marshal Rodolfo Graziani, accepted the commission from Mussolini on the condition that he was allowed to crush Libyan resistance unencumbered by the restraints of either Italian or international law. ..

A barbed wire fence was built from the Mediterranean to the oasis of Al-Jaghbub to sever lines critical to the resistance. Soon afterwards, the colonial administration began the wholesale deportation of the people of the Jebel Akhdar to deny the rebels the support of the local population. The forced migration of more than 100,000 people ended in concentration camps

So enforcing peace and democracy in Libya is certainly possible. But, assuming not all the locals appreciate it it could take 2 decades and concentration camps. The basic rules are that wars are easier to start than to end and that no battle plan survives contact with the enemy. We just don't know how these things will work out so while there are things worth fighting for it should not be done lightly and certainly not because a one sided media (I know "media" should be plural but if they speak with one voice they aren't) is reporting that one side is black and the other white.

This is a map, which I suspect shows where there were riots rather than where the rebels actually took over. 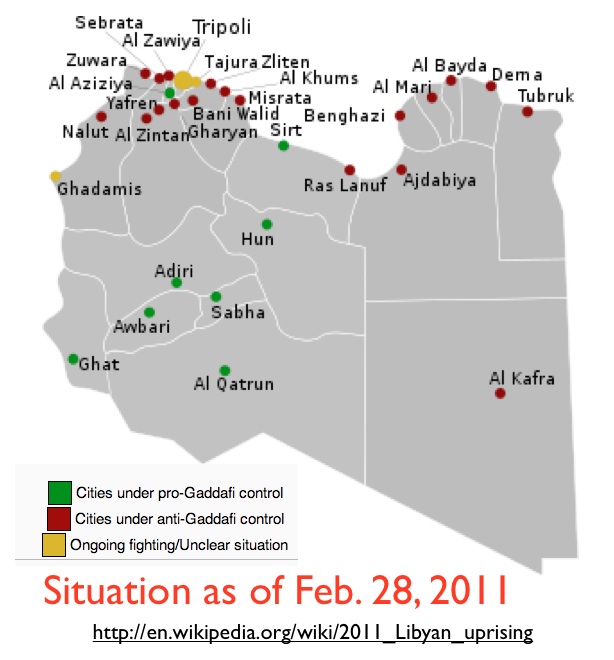 It shows the rebels in charge of the eastern provinces and Gaddafi of the southern and is now obviously in control of Tripoli and the western coast. This fits very well with the previous historic map with the east being the Cyrenaica province, the south being Fezzan and the western coast being Tripolitania. What is happening is clearly only partly, if at all, a rising for democracy. Partly it is the Sennussi against the others. Partly it is what happens when a country's birth rate produces an awful lot of teenage boys. Partly it is our al Quaeda friends from "the Balkans, in Afghanistan and in Iraq".

The reason France, the driving force here, went for it is because they want to be regional hegemon in North Africa. This is the same reason for the Ivory Coast war about which I knew nothing apart from what we are meant to know until I read this fine article by Gerald Warner which shows that the"democratic" goodies "recognised" by the "international community" are at very best no better than the previous dictatorial democratically elected thug not supported by the French.

The reason Cameron went for it is because he saw the chance for a short victorious war against somebody to weak to fight back.

The reason Obama went for it is that - apart from a little action under NATO as "I am their leader I have to go where they want" - he didn't, neither does the rest of NATO.

The reason Russia's Medvedev didn't veto it is because he saw no reason to stop the fools making fools of themselves.


If Megrahi were guilty Koussa, head of Libyan intelligence at the time, certainly was. If there was enough evidence to charge a fictional character (Hero on a Donkey the Serbian equivalent of Don Quixote) with war crimes in Kosovo on the basis of a western journalist late at night in a hotel bar, who made it quite clear he was after atrocity stories and not the truth, being wound up by a local then there is certainly enough evidence to have arrested Koussa.


Once again we see our judiciary, police, politicians & media are wholly and completely corrupt and neither guilt not innocence is of the slightest consequence.

And of course this is simply further proof that the regime they want to put in place, rather than being democratic, will consist of the lowest scum they can find. I suspect they will not be able to find scum quite as low as the pimps, drug dealers, Nazis and organleggers our loyal media called "democrats" in Kosovo but they will try.