Nobody ever thought anybody but Labour were going to win which probably worked to UKIP's advantage.because people didn't feel they "have to vote Conservative to keep Labour out". Which makes the AV vote important because if it passes nobody need, ever again, feel constrained to give their vote to the 2nd worst choice to keep out the worst.
The media are concentrating on the Pseudoliberals* being knocked into 6th place which is universally described as "humiliating". Here is the BBC showing "due balance" by devoting their space to the leader of the 6th place party saying it doesn't count and not even mentioning that for the first time UKIP have got into 2nd place. I am also listening to the BBC discussing this with and only in relation to the LudDims.

The Mail concentrates on the interesting point that Nick Clegg, who sits for a neighbouring constituency, didn't even bother to visit the constituency, which will not go down well with activists. Perhaps this is a sign that Clegg and the Pseudoliberals do not anticipate winning, or even standing, under their party label at the next election but will get either parachuted into safe Tory seats or lucrative sinecures which are in the Tory gift (eg Clegg following Mandelson's slime trail as an EU Commissioner).

However the Conservatives have been even more effectively humiliated by dropping 4389 votes and being beaten by UKIP as well as Labour. This is not what parties of government expect.

For UKIP it is a wonderful result. The LudDims having placed second last time should have been a very hard act to beat, even with their current low polls. For UKIP to beat the Conservatives in a Westminster election is amazing. I regard this as the 2nd of 3 hurdles the party need to become a, perhaps the, major player in UK politics.

The first was placing second, behind the Conservatives but ahead of Labour, in the last EU election.

The second is showing they can outpoll one of the main parties in a Westminster election which they have now done.

The third is changing the electoral system to one which doesn't disenfranchise anybody who votes for them, which is coming up in the AV referendum on 5th May where the odds look like being for a yes vote.

Following those UKIP will be almost automatically one of the major parties, probably initially the 3rd one, held back only by the fact that 3 of the 5 terrestrial TV channels are state funded propaganda organisations which show absolutely no balance towards them. This is very important for Britain because currently the only opposition are statists, who in fact have no actual policies other than to promise that we can borrow £150 bn a year forever without it costing anything. If we don't have a free market government we desperately need a free market opposition. Note also that the BNP's vote fell even the BNP vote plus the English DFemocrats combined was less than the previous BNP vote. Generally the pattern is that UKIP do better in Labour areas and UKIP in Conservative but we now see UKIP have established themselves as the clear alternative to the established parties. Pity the Greens didn't stand and thus avoided humiliation.

The Tea Party could work in America because their system of primaries allows their supporters to compete for the Republican nomination. In Britain that is impossible because our parties are rigidly controlled from above, making us a much less democratic nation. However if UKIP, who represent the same progressive libertarian streak (for nuclear power and against catastrophic warming alarmism). For the first time I think there is a good chance that we will see such a successful movement here. Indeed UKIP, being entirely able to stand in their own name at elections and then probably forming a coalition with the Conservatives (it is by no means clear who would be the larger partner) is an improvement over being a coalition within one party and having to offer only 1 manifesto to the electors. 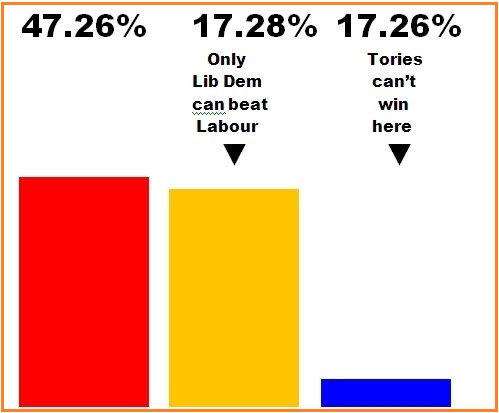 this is a spoof of almost any LudDim leaflet where they play with figures to fool nobody
* I have decided to use the name Pseudoliberals as the proper title of the "LibDems". Liberals believe in liberty; in free trade; in market freedom; in the rights of small nations; in individual freedom. That is what the term meant when it was founded. I was expelled from the party on a specific charge of believing in most of these which, in an Orwellian reversal of language was described as "illiberal" and in in a perfectly accurate manner also described as "incompatible with party membership". It is the founding idea of the US Constitution as well. This was and is such a popular series of ideas that various sorts of fascist and socialists have adopted the name but not the principles. Such misuse of language is, I am afraid, endemic to politics because it is about persuading people by almost any means. However the meaning of the word is inherent and those entryists who have stolen the name simply are not liberals and cannot honestly describe themselves as such. Taking back the name, tarnished though it may have been, is an important battle in the fight for freedom. We can fight it on ground which favours us because the derivation of "liberal" is so obvious and winning it back will considerably help in the other battles.