12/13ths OF FORTH BRIDGE PRICE IS GOVERNMENT MAKEWORK, SAME APPEARS TO APPLY TO MOST OTHER GOVERNMENT PROJECTS 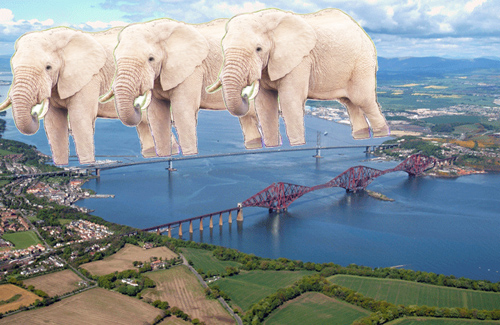 My latest article is up on the ThinkScotland site. It challenges anybody from Scottish government (politicians or government workers) to give an alternative explanation other than 92.3% of the alleged cost being government parasitism, or to explain why this should be considered unusual. No takers so far but I will update if anybody tries to. Obviously anybody who feels this is in any way an unfair assessment may do so here too but I would rather see all comments unified there.
================================================

Something is very wrong with the Forth Bridge project

The new Forth bridge was costed at up to 13 times what the original cost. The cost of the original, inflation adjusted, is comparable with what bridges cost today across the rest of the world. Moreover the cost of a tunnel, conveniently about 10% above that of the most expensive bridge, is 100 times what such tunnels have been cut for across the North Sea. The cost of the Glendoe hydro works, with 9 km of tunnels, shows we can build at roughly Norwegian costs if the will is there. It is difficult to avoid the suspicion that the cost of a tunnel was deliberately arranged to make the bridge look cheaper, but if that were so it would be impossible to say any figures from the same source are trustworthy. The option of recabling the bridge seems to have been ignored with the government first implying that this could not be done without closing the tunnel & then quietly admitting that it could.

What explanation has there been for this/ Almost none. No Holyrood MSP has been willing to publicly defend this. One official speaking in connection with all the other bridges costing less said "In short, it is not possible to lift one bridge or tunnel design and put it into another location, because the geology of every site is different" (he was not asked to compare with the previous bridge which clearly was not at a different site) Another said "When making comparisons with other crossing projects, including bridges and tunnels, it should be borne in mind that each project is unique and it is difficult to make like for like comparisons". Neither of these are explanations of what the actual differences are simply a call to ignore the bridges behind the curtain. One senior Holyrood politician privately insisted that the reason our bridges cost 100 times what Norway's do is because RU rules require a 3rd small escape tunnel. Though unimpressed by EU bureaucracy I do not find that a credible explanation of a 100 fold price increase.

Nor is this limited purely to the Forth Bridge or even to Scotland. World comparisons would have led us to expect Edinburgh's trams to cost about £105 million. In London Richard Rogers designer of the Millennium Dome has said that of the £670 million the Dome cost to build only £46 million of it was spent on building it - the rest went on bureaucracy. In the same way the Glasgow Airport rail link was scrapped after costing £41 million, because completing it was expected to cost £300 million - when both governments had had a NIH (not invented here) offer on the table for a monorail connection for about £20 million.

It looks like Scottish public projects are running at around 13 times what they should be - higher if one includes NIH options like tunnels & monorails (& perhaps modular building of schools) where, because technology has improved since 1960 comparative prices have fallen.

Why are we in this situation? If this was a banana republic we would expect it to be because of corruption aka crony capitalism. I don't think that is the major effect here. A second explanation is that the laws of physics are different here & now from what they used to be & still are in the rest of the world - I don't think that is it at all. The only other explanation I can think of is that our government is so beset by regulation, bureaucracy & paper shuffling that everything costs 13 times what it should. This may be being unfair to some departments though it is really up to them to show why they are different.

I am led to this conclusion by several factors. There has been a blanklet refusal of civil servants & politicans to give any explanation more thorough than "each prohect is unique"; the experience of the Dome where the builder specifically said it was the bureaucracy; the monorail experience where there was (& indeed still is) a blanket refusal by both civil sevants & politicans to evaluate any NIH concept; & the fact that with the tram project spiralling out of control impartial mediation decided that 90% of the cost overrun was caused by TIE bureaucracy. A further example of the interdependence of civil servants & bureaucracy was when Sir Alastair Muir Russell admitted failing to keep politicians informed of the rise in the cost of the Holyrood building, thus largely clearing Donald Dewar. Such was their confidence in him, despite having blown £400 million, that he continued to receive plum jobs including the very delicate one of producing the desired result to the Climategate enquiry!

No reason has been given to doubt that the current bridge could be recabled & double decked at about £20 million, that a tunnel could be cut for about £40 million & that a new bridge could be built for about £320 million if the cut back in bureaucratic controls, so urgently necessary for other reasons, is carried out. If this is allowed I would go for doing the first 2 & paying for it out of petty cash.

If any civil servant or politican feels this assessment is inaccurate & their roles more defencible I am sure ChangeScotland would allow them to reply. So far the silence on the subject has been defening.

Perhaps most persuasive that something is going on

Comments:
Hi Neil ( from Sandy) - perhaps you read the Herald, and in one of Ian Bell's columns was the note that the new defence academy that was to be built in the vale of Glamorgan was to be cancelled giving a saving of £14 billion. He did not say if this included running costs for a few years, or not, but it is indicative of the huge waste of public money the procedures of our government establishments seem to shrug of as normal, and worse acceptable.It is also sinister that where that money ends up is very obscure.

Suppose they are aware of their parasitic nature, but still do nothing. This implies that they do not think it matters enough. In nature a parasite is just another form of predator and the predator prey relationship becomes catastrophic for one or both party's if one becomes too successful relative to the other.Typically a predator species requires a larger stable population of the prey to survive, but if they kill too many they bring about their own extinction.regards Sandy

It seems clear that they are ignoring this, so conventional representative methods won't work. Just a few random thoughts, is there a Scottish audit office? Maybe with the help of someone like the taxpayers alliance you could ask a firm of civil engineers to look at the bridge spec and give a cost estimate? Armed with this credible professional document you maybe able to make some headway. Failing that, a private prosecution of some sort (again funded by a lobby type group) might make 'em sit up and pay attention

Hi Neil, interesting piece and I agree we should just repair the existing one.

Any chance of a image credit for http://twodoctors.org?