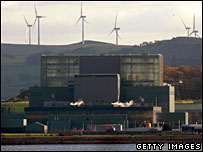 Hunterston encroached on by windmills

I sent part of the item I wrote yesterday to various newspapers & it has been published today by the Scotsman but so far apparently by nobody else. I won't repost it here because the published version differs only from the part of yesterday's in that the Scotsman edited my statement that 25,000 die each year from fuel poverty (via Help the Aged) to "many thousands" & deleted the "as admitted by their lobby organisation Scottish Renewables" following the reference to wind being unable to supply any part of baseload.

This has resulted in a couple of emails - the minor one asking me to justify my figures. I replied

The £1,243 comes via this SONE briefing
http://www.sone.org.uk/content/view/1555/26/"Last summer uSwitch.com, the price comparisons firm, reported the average annual household energy bill had doubled in five years to £1,243. It could reach £4,185 by 2020 if the trend continued. But that did not count the likely cost of the massive investment required, adding £548, so that by 2020 bills could have quadrupled to £5,000 a year" as you will see I have been somewhat optimistic in sticking to Ofgen's £2000 estimate rather than £5,000.

The £300 is assuming we can match French prices which are a quarter of ours. With a regulatory regime based on safety needs rather than politics I strongly suspect the nuclear industry could do better than that.

Fig 21 here http://www.scotland.gov.uk/Publications/2006/01/19092748/8 shows 5.1 TWH of electricity from all "renewable" sources out of just over 45. Scottish Renewables website disingenuously shows 60% of "capacity" being wind but since wind averages about 27% capacity usage that probably means that the wind capacity is much less than 30% of that "renewable" 13%. You will have read my comments about the refusal of the Herald to publish factual responses to the the disgraceful lies they published from that same Scottish Renewables claiming 25%. It is typical of most of the media in this country, obviously including the Herald, that they have not the least compunction about promoting claims which are not merely false but, as can be seen from the way SR's claims are disproven from their own site, deliberate lies by "environmental" parasites without the remotest trace of honesty.

I should admit that I find the £1,243 is actually a figure for all domestic energy including gas. Nonetheless the important bit is that France is producing it so much cheaper.

The more important response was from Steuart Campbell who has provided a link that suggests the situation is much less dispiriting than I had realised.

What you say (in the Scotsman today) is correct, but unduly pessimistic (see http://www.guardian.co.uk/environment/2010/may/12/coalition-environment-policy).

So it seems that new NPPs will proceed, despite LibDem objections. I note that the new Sec of State for Environment and Climate Change is not Simon Hughes, the LibDem energy spokesman, but Chris Huhne. So either Simon refused the job on account of NP or wasn't even offered it.

I feared that a Con/LibDem coalition would stop NP, but now that it's been sidelined, I'm relieved and hopeful. Any vote on the matter in the Commons, with the LibDems abstaining, would get overwhelming support because of Labour's support. However, it seems that a vote will not happen. Nothing is stopping applications to build NPPs except that planning process (in England and Wales). Even Scotland may fall into line when the SNP lose power next year.

It's just sad that all parties think that we need renewable energy generation.

Steuart
------------------------
Thank you for that link which I had not seen & it does significantly reassure me. The LDs being allowed to vote against it is indeed an "odd arrangement" but there should be enough sane Labour MPs to support it unless a Miliband changes the policy back to windmillery alone.

Even so I assume the LDs will act as a brake on development at every turn.

Huhne had been "environment spokesman" & I suspect got the job both because, as somebody who would have beaten Clegg to the leadership if some ballots hadn't been mysteriously delayed he is a bigger fish than Hughes & because the LDs think "environment" is a more important part of the portfolio than energy.

I think you need to make it clear that, as far as I can tell, there will be no need for as vote in the Common on NP (the only thing holding up applications is validation of the designs by the NII). If there were a vote, the LDs would abstain, not vote against.

Once approved by the NII, applications can be made, but they would be referred to the newly-established Infrastructure Planning Commission, an independent body that now decides applications for 'nationally significant infrastructure projects' (England and Wales only). See http://infrastructure.independent.gov.uk/. In effect, it's a fast-track system avoiding protracted local inquiries, but not everyone likes this idea. So I can't see the matter coming before Parliament and the LDs can't stop such development without threatening the coalition. In effect, although the new government has a policy on the environment, it doesn't have one on energy (it annoys me that energy never gets mentioned in policy lists). So where is there any declaration of how the government will keep the lights on?

The "odd arrangement" is that the LDs will be allowed to vote against any new nuclear plants if a vote is ever required but since they were Labour government policy we can expect Labour to help them get it through. If Balls takes over they certainly will. Miliband D may be more difficult, having nailed his colours very firmly to eco-fascist mast but I think his progress in Labour owes much to him being a blank slate.

It will be interesting to see if there are any responses either on the figures or from the LudDems.