GETTING THE SCOTTISH ECONOMY MOVING & RAISING £10 BILLION ON THE SIDE

How does Scotland raise £10 billion?

Simples. Offer the first 50 customers the chance to own their own Special Economic Zone of 1 square mile (or they can get more but the total remains the same). If somebody makes an offer the government have 3 weeks to accept or reject. Within that area building planning regulations are lifted as are whatever else the EU will allow. Probably unfair dismissal laws & environmental laws where the pollution wasn't measurable outside the zone. The developer also has the right to compulsory purchase any property at the fair valuation price prior to zone establishment + 50%.

Would there be purchasers? I very much think so. Donald Trump has gone through over 4 years of wanting to invest £1 billion in building a golf course of 800 acres & still hasn't got permission. Would he be willing to pay that? I think so. Indeed opponents have claimed that he is really building a housing project & the golf course is just for show - I think that is a considerable exaggeration but if it were true he would jump at the chance of buying 2 square miles (1280 acres) & making a lot more money. £52,000 per plot is not a lot & there would be many developers seeking to build holiday homes as well as manufacturing centres. Outside the zone the intrusion would be minimal. Far less so than the windfarms we see "beautifying" Scotland's countryside so no "environmentalist" who supports them could oppose such zones. At least not honestly. 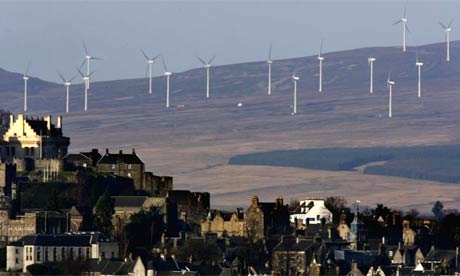 The effect on the Scottish economy & tax base would be considerable. A general rule of thumb is that £1 of investment pays £0.125 tax so taking each unit as bringing in £1 billion of investment (if the developer is putting up £200 million it is reasonable to assume they are going to make the best use of it) the government will pick up about another £6 billion annually & the general growth in the economy would be about twice that.

Of course all this assumes the entire country won't start being run on free market lines as I have previously suggested otherwise we wouldn't need special free market zones. Unfortunately there is no sign of that.

And what do we do with £10 billion? Well that's for tomorrow.

Comments:
This is a bit like early 1980's Thatcherite Enterprise zones, perhaps you idea is an enterprise zoen on steroids. Council critics at the time got very sniffy because lots of business bailed out of their own expensive areas with meddlesome regulations, without actually realising that they were the problem. They hate attacks on their feifdoms as it unsettled the peasants who paid for their own pleasant, worthless existence.

Yes. The Enterprise Zones were set in urban areas of high unemployment whereas I am suggesting they can go wherever investors are willing to pay for them. The bureaucracy decided EZs hadn't worked & replaced them with Urban Development Corporations. Since Docklands was an EZ I suspect they had to fiddle the figures a lot to make them "not work". UDCs have the advantage, for the bureaucracy, that so much more money goes onn bureaucrats. It is the same phenomenon that makes grants so muchh more popular, with the bureaucracy, than prizes.