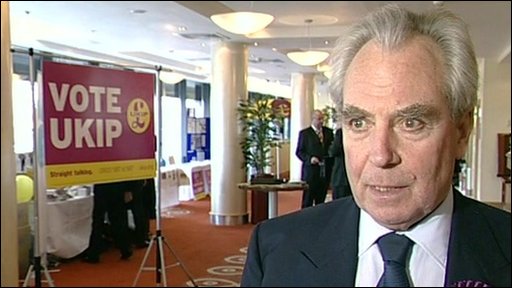 Some quotes from UKIP's Manifesto since you wont be seeing much MSM coverage:

"· Introduce a flat tax which will make all taxpayers better off and take a further
4.5 million lower paid workers out of income tax altogether. The flat tax will merge existing income tax bands and Employees’ National Insurance contributions into a single rate of31%, starting at that £11,500 threshold....
· Stimulate job creation by phasing out Employers’ National Insurance (the ‘tax on
jobs’) over a five-year period (20% reduction p.a.). The revenue will be recouped either as PAYE tax, corporation tax (2), sales tax revenue, or by the reduced need for State welfare
· Recognise the dangerous levels of national debt and accept there is no alternative to major cuts in government spending."
-Aim to reduce the public sector to the size it was in 1997, cutting many unnecessary
quangos and non-jobs over five years. The goal is to exchange two million public sector jobs for one million new skilled jobs in manufacturing and related services and at least one million additional jobs created as a result lower personal taxes and reduced business taxation and regulation,
· Stop the tax and welfare system penalising married and unmarried couples
- Require the BoE to enforce a rigid division between retail banks and investment banks (where much instability has occurred) based" p3 & 4

"A 25-year programme of building nuclear power stations that will provide Britain with 50% of its future electricity demand. This will cost on average of £3.5 billion p.a. (3)...
A prison building programme with a particular emphasis on modern off-site manufacture (4)" p4

"· End mass, uncontrolled immigration. UKIP calls for an immediate five-year freeze on immigration for permanent settlement. We aspire to ensuring any future immigration does not exceed 50,000 people p.a.
· Regain control of UK borders. This can only be done by leaving the European Union ... There can be no question of an amnesty for illegal immigrants." p5

"end the scandal of early releases and weak sentencing. This will cost approximately £2bn p.a. in contrast to the cost of crime, estimated by the Home Office at £45bn p.a.
· Rebalance the law to protect residents who seek to defend their own homes, families or property against intruders
· Introduce a ‘three strikes and you’re out’ policy
· Allow binding national referenda on controversial public law and order issues" p6

"· Spend an extra 40% on defence annually, another 1% of GDP
· Expand the Army by 25% to 125,000 personnel and double the size of the Territorial Army
· Reappraise our operations in Afghanistan to create a single, clear and achievable
mission or seek to negotiate a withdrawal
· Cut MOD bureaucracy, which has one civil servant for every two military personnel (5)" p7

"· Put medical staff back at the heart of the NHS, replacing bureaucrats and managers. Franchises will require clinically-trained Matrons to run hospitals, taking a dominant role on wards and primary responsibility for hospital cleanliness" p7

"offering all parents ‘School Vouchers’. The vouchers will be equivalent to the average cost of State schooling and follow the child to the school of the family’s choice, transferable to State, private or faith schools" p8

"The UK’s current welfare system is ridiculously complicated and requires an army of bureaucrats to administer. There are more than 70 separate benefits, each requiring masses of forms and helping to entrench dependency...
· Roll the mass of existing benefits into simpler categories, while ensuring every UK citizen receives a simple, non-means tested ‘Basic Cash Benefit' ...until their wages reach UKIP’s proposed £11,500 personal allowance so they can take jobs without being heavily penalised by the system" p10

"UKIP will seek to establish a Commonwealth Free Trade Area ... a CFTA would account for more than 20% of all international trade and investment, facilitating annual trade exchanges worth more than $1.8 trillion and direct foreign investment worth about $100 billion." p10

"We called for a rational, balanced approach to the climate debate in 2008, before the extensive manipulation of scientific data first became clear.
· Increase nuclear power generation to provide up to 50% of our electricity needs. Because Britain’s domestic energy plants are ageing and renewable energy sources have been shown to be unreliable, UKIP will pass hybrid Acts of Parliament to accelerate the planning process and allow old reactors to be replaced (3)
· Reduce environmental bureaucracy to a minimum - consistent with good practice and international standards" p11

"· Introduce ‘Direct Democracy’ whereby 5% of the national or local electorate can demand a binding referendum on any issue...
· Introduce an element of proportional representation in national and local elections. UKIP favours an electoral system based on Alternative Vote Plus so that constituency MPs have to earn at least 50% of the vote (as in Scottish Parliament and Welsh Assembly elections)...
· Retain devolved national assemblies but replace the representatives with Westminster MPs from the same nation. (6)
· Require UK schools to teach Britain’s
contribution to the world, including British inventions"
· Tackle extremist Islam by banning the burqa or veiled niqab in public buildings and certain private buildings(7)"p13

"· Support GM foods research and require all imported produce to be labelled so consumers can make informed choices. In the meantime, we will continue to oppose production of GM foods and be open to evolving scientific advice (8)...
· Reassert our territorial rights, reclaim our fishing grounds, restore our fishing fleet and support our fishing industry for future generations" p14

This is a radical programme which would certainly get us not just out of recession but into growth. Particular comments:
1 - The EU Enterprise Commissioner has said EU regulations cost 5.5% of GNP (£80 bn) add the £10bn paid & not returned comes to £90. I assume they believe The Commissioner is underestimating & that the returned money is mainly wasted. I think it should have been phrased "between £90 & £120 bn, all governments having refused to make a precise calculation"
2 - I regret this is the only mention of corporation tax (though in context if they make the promised cuts they will not have to raise it). Cutting CT is what got the Irish economy 7% growth & similar cuts in the UK would have a similar effect on growth.
3 - They could do this for less. If allowed & given a sensible regulatory framework the market would happily build them without charging. For that cost we could build a reactor manufacturing centre which could mass produce turnkey operation nuclear plants which would not only produce most of our power very cheaply but establish a massive export market. Westinghouse's AP100 is already available in quantity at under £1 bn each so £87.5 billion could provide more than all of our current usage. This commitment, while very radical by the standards of other parties is technically timid.
4 - The only mention of off off site (ie mass produced) building. By comparison their official housing policy is unadventurous - this may be because UKIP members vary between libertarians & old conservatives.
5 - Defence spending should be aimed much more at technological innovation - this policy is to much fighting the last war. However having more soldiers than MoD clerks is radical, if only by the standards of the others. I a, not happy about leaving Afghanistan quickly but UKIP is quite right to say that the mission nmust be clear. We went in originally to get bin Laden, who I believe is dead & stop al Quaeda & that should be our only purpose.
6 - This is not ending devolution & should not be described by the media as such. It is rolling all 160 MSPs & MPs into 50 odd jobs getting rid of most of them (oh dear, too bad, never mind) but all elected by the Scottish Parliament system & leaving them perfectly capable of doing their jobs in both Holyrood & Westminster. Indeed Holyrood is notoriously underworked giving great incentive for idle hands to come up with new things to ban). As a long time supporter of devolution I have no problem with this.
7 - This has had a lot of media coverage about it being a total ban but it is no moreso than the smoking ban having made all smoking illegal
8 - I regret the partial bowing to unjustifiable scaremongering against GM foods. Oh well they are still much more rational than their competitors.