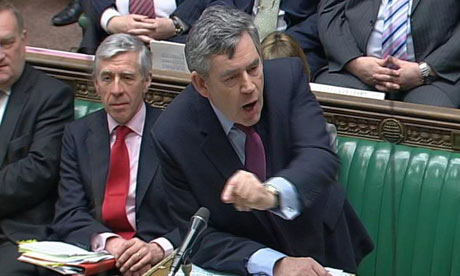 The first issue, apart from whether whether the leaders pose for photos with somebody else (the entire cabinet for Brown; Vince Cable for Clegg) to have hit the news is that the Tories don't want to have the National Insurance rise Labour have decreed for next year. It is a very small straw in the wind showing the Tories making a tiny cut in government spending to produce a tiny cut in the burden on burden on the productive sector. The strange thing is that Brown has made such a big issue of it.

Plus his ludicrous claim that business leaders who say not raising NI would help industry have been "deceived" by the Tories, business leaders being morons who don't understand their jobs presumably. Which puts it as being a clash not between the Tories not raising NI as against Labour not increasing the deficit but about the Labour option being simply maintaining government spending. If the money were to be spent on cutting the deficit it might be arguable though I would prefer to see higher growth than cutting the deficit since higher growth means that there will, in due course, be enough money to balance the budget. However on the question of what will work better - cutting the money available for government spending or cutting the money available to the productive part of the economy Labour's support of the latter is economic insanity.

It also conflicts with Alastair darling's claim, during the economic TV debate, that Labour would cut the deficit while the Tories, by cutting taxers, wouldn't. Labour have put maintaining "public services" ie spending, as their priority.

The BBC are doing their impersonation of impartiality ending their report on the news last night by saying "the issue is that the Conservatives want to cut the government sector & increase the private sector" which places the Tories as the ones changing the rules, when in fact Labour have increased government spending from 40% to 53% of the economy.Roger Peston also sums up his "Who's got it right" blog by saying, after acknowledging that all the experts say cutting this tax will work, that it isn't really an economic question but about maintaining "the good society". Labour good, Tories bad then, impartially.

The BBC could equally truthfully have said:

"the issue is that Labour claim the productive sector, already reduced to 47% of the economy, can be supported by the productive 47% in the private sector while still promising that they are the party of growth"

"Labour have staked their claim to integrity on the assertion that, by taking more money from the productive sector & using it to pay the inefficient & unproductive government workers whose numbers they have increased by 2 million, will produce a more efficient & productive economy"

All of these are equally factual ways of saying it. The state funded broadcasting corporation parasites can be relied on to say it in a way that spins towards ever bigger government parasitism.