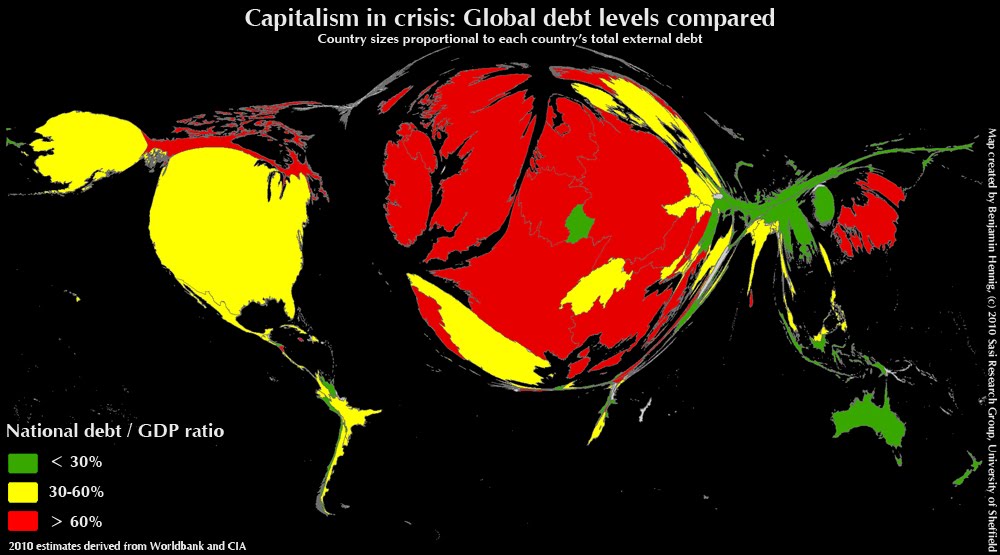 American Al Fin has this graphic illustration of exactly how deep a hole much of the world is in. It looks like Britain wins the digging prize. If we got China's 10% growth, which we could do if government wasn't preventing it, we would rapidly move from red to yellow & ultimately green even without paying off anything. Without growth we are screwed. This is not discussed or even mentioned by the parasites of the official parties in the "debate" in what substitutes for a real election. Al says:

The map displays the problem of the Eurozone and most modern nanny states. Some of the countries that are worst off include those with a combination of high debt, high tax rates, high levels of social welfare benefits, and low fertility rates. Countries such as Greece, Spain, Italy. In fact, most of Europe falls into that category. Fortunately, native Europeans have high average IQs. Where there is intelligence, there is hope. Likewise, it is the intelligence of the Japanese people which gives Japan hope.

Out of all the Anglosphere, Australia and New Zealand appear to be the least indebted. Canada has debt, but it is also very rich in natural resources and in intelligent people. The UK is steeped in debt, is drowning in political correctness, and is under a growing siege from fanatical Muslim immigrants.

Comments:
Neil, you should look at this slideshow which makes much the same point:

All of the countries with a massive foreign debt are Western.

Neil, you should look at this slideshow which makes much the same point:

All of the countries with a massive foreign debt are Western.

But the Asian countries went though a debt crisis a few years ago, sorted themselves out, & went back into growth.

Perhaps our delay was because the western countries were "to big to fail" but unfortunately that limitation doesn't actually stop the laws of economic gravity work, it may just make the crash worse.