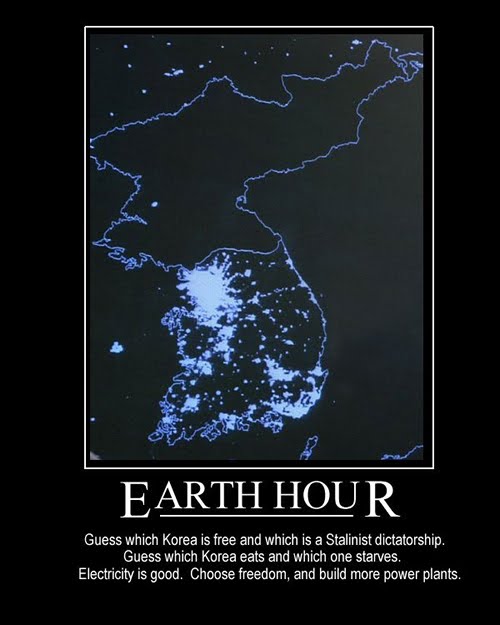 Via Mr Euginides & Dizzy together with a plea that instead of celebrating Earth Hour (last year they called it Earth Day) by switching off all your lights (8.30pm on Saturday 27th March) we should celebrate Human Achievement Hour by keeping them on. My suspicion is that most people will do the latter & only the most useless & pretentious parts of government will do the former which seems appropriate. eg Zimbabwean children will hold a candlelit picnic & the WWF fakecharity are pushing it.

This orbital picture shows, in a way 1,000 words couldn't do, what is wrong with pure socialism & indeed Luddite "environmentalism". One may argue correctly that less pure socialism/Luddism we have in Britain is less destructive but that is an argument only that it is less horrible not that it is in any way good.

There is a close relationship between electricity use & GNP with the developed world averaging just under $4 of GNP per kWh, China doing $2.45, Britain $6.3 & those significantly above being undeveloped, artificially increasing wealth by having oil, or so failing that electricity & the rule of law doesn't go beyond the capital city, or all 3.

There are a noisy minority who would do this in Britain if they could, though they have less organising ability than Kim. This extremely silly letter published in the Morning Star inviting us all to prove our socialist purity by supporting North Korea in the World cup. To be fair it was followed by a reply saying otherwise but to continue being fair that was followed by a further reply saying that "many reactionaries would take comfort" from the 1st reply.

My previous poll on the desired size of government showed that while there is a normal curve centering around about 17% of GNP being government spending there was a another small bump at +90% who clearly can never be even close to placated by anything acceptable to the overwhelming bulk of us (& of whom I am ungenerous enough to suspect none live out of anything but the public purse). Placating the Luddite parasites need not be done & by doing so we have just been paying Danegeld, since, as my post yesterday showed, the parasites will tell any lie to build a poorer nation if it will pay them.

Comments:
Lack of electric lights during "Earth hour" has killed half as many people as have died creating 20% of the world's electricity (ie nuclear) over the last 20 years.
http://translate.googleusercontent.com/translate_c?hl=en&ie=UTF-8&sl=fi&tl=en&u=http://www.hs.fi/kotimaa/artikkeli/WWF%2Bpahoittelee%2Bpimeystempauksen%2Baikana%2Bsattunutta%2Bkuolemantapausta/1135255035949&prev=_t&rurl=translate.google.com&twu=1&usg=ALkJrhhRxnpLchuvvwDl9gvwdTuCS840mw