HUNG PARLIAMENT - WHAT DO THE TORIES DO 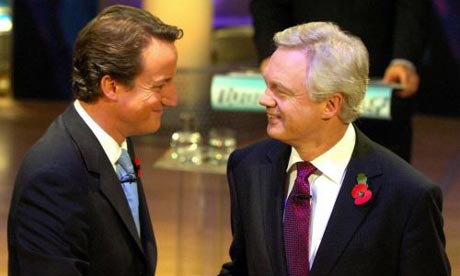 The polls are showing an increasing likelihood of a hung Parliament. Iain Dale forecast very close to a hung Parliament when the polls were showing a comfortable Tory lead, with probably about 100 independents, simply because national swings no longer reflect local conditions. William Hill are making this 2:1.

So if the Conservatives are the largest single party what should they & David Cameron do?

We are in uncharted water. Normally a party leader who fails to win gets the chop & the Conservatives have been particularly keen to cull losers. Both Thatcher & Iain Duncan Smith were removed even without losing simply because they were expected to. If the Conservatives are the largest party they haven't totally lost but they certainly haven't come close to winning. If you can't win when the government has brought to country to, at least, the edge of national bankruptcy & kept us in recession from longer than our competitors then it is unlikely there are any circumstances under which a Cameron Conservative party could win.

It seems to me Cameron has made 3 very major mistakes -
1 - Pulling the Tories onto the global warming/Green bandwagon, just as the wheels were going shoogly.
2 - Ignoring the economy, the biggest single issue in almost any election
3 - Making & breaking a "cast iron" referendum promise.

All of them are major failures of electoral tactics. Unlike many electoral questions they are even more important in government.

#1 & 3 are ones on which the large majority, of his party are against him. Conservative Home recently estimated that for catastrophic warming.

The only thing that could keep him as leader would be if the LibDems offered the poisoned chalice of minority government which could only be giving the Conservatives enough rope to hang themselves. It would be impossible for the LDs to support the sort of tough cuts needed, to avoid trying to take credit for every cut staved off or to support them through the length of a Parliament. The best that could happen would be that they get the opprobrium for recession & cuts & then get dropped in it when it was deepest.

The better alternative would be that Cameron would go, or be pushed if he refused but I doubt he would be so foolish. I assume replaced by David Davis who ran him a close 2nd in the leadership contest & has the sort of toughness people want in a recession & has shown integrity, whether you agree or otherwise, in resigning over ID cards. I previously suggested Cameron could regain momentum by bringing Davis & Redwood into the team but, astonishingly enough, it seems my advice isn't being taken yet again. In this case, after a year of Conservative reappraisal & of grossly incompetent Labour government (one reason they don't have their hearts in this election must be fear of winning) propped up by LDs he would be able to force a new election & walk it.

This tactic is a combination of the Emperor Claudius promoting Nero to "Let all the poisons that lurk in the mud hatch out" & Mencken's "Democracy is the theory that the common people know what they want, and deserve to get it good and hard" but on the other hand we common people right don't have any major party offering us anything we want so a real choice would be pretty good.

Comments:
"The better alternative would be that Cameron would go, "

"or be pushed if he refused but I doubt he would be so foolish."

He could be consigned to the back benches and the second longest sulk since Edward Heath.