WHAT DOES THE CONSERVATIVE PARTY CONSTITUTION SAY ON CHANGING REFERENDUM POLICY? 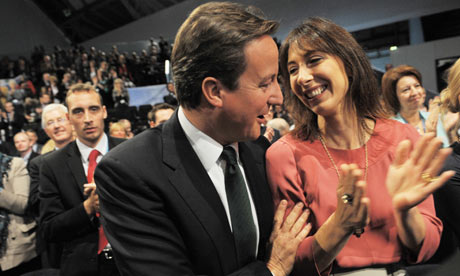 best photo I could find of a Conservative audience

Today, I will give this cast-iron guarantee: If I become PM a Conservative government will hold a referendum on any EU treaty that emerges from these negotiations.

Gordon Brown, it's a gesture to the British people saying: "I know best. Your views are irrelevant. Get used to it."

Make no mistake, that's the reason he refuses to give the British people a referendum on the EU constitutional treaty - he simply doesn't trust them. It's the arrogant belief that he - and only he - has the right to decide what's best for Britain's future.

Well, Prime Minister, I've news for you. The old politics that you grew up in no longer reflect the new world we live in. It's a world where people are demanding - and getting - more power and more control over their lives.

Difficult to conceive of something more definite than that.

So in the presumably unlikely event that Cameron, in power, reverses himself would such a reversal be official policy. What I am asking is, under the Conservative Party constitution how is official policy made.

To find out I looked up constitution of the British Conservative party on Google & astonishingly it isn't there.

I did find a speech from William Hague some years ago saying how important it was that it be democratic & give the members a say but the thing itself is missing.

On the one hand such things are not taken very seriously by our leaders (the Scottish Lib Dem conference is officially the sovereign body of the party & it unanimously passed my motion calling for the arrest & trial of western leaders who had committed war crimes against Yugoslavia, which is thus still legally the Scottish party position, yet took my support of that as being evidence that my views were irreconcilable with the party). on the other hand legality can come back to bite at the most unexpected moments (the break up of the USSR took place because the Stalin Constitution specifically said that the federal state were sovereign, thereby proving what a fine, free 7 democratic place the USSR was, & I doubt if Stalin ever expected it to be taken seriously).


So if the majority want to keep the present policy who would be breaking party discipline if they supported something different?

UpPDATE - Later this day it was announced that the Czech president has ratified the treaty. Can't blame him for not saving our bacon when our own PM wouldn't. The Conservatives are now going to have to decide whether to stand by their promise.

Comments:
Yes, I can help

Thanks. No wonder they wouldn't put such a constitution online. With Party chairman & Treasurer appointed purley by Cameron it is indeed a one man band.