Protecting "The most Vulnerable in Society"

This phrase is the regular mantra of those opposing cutting government spending.

The unstated bit is exactly who are "the most vulnerable".

Googling the question led to this quote from Hubert Humphey "those who are in the dawn of life, the children; those who are in the twilight of life, the aged; and those in the shadows of life; the sick, the needy and the handicapped.” which seems pretty fair. Of course it excludes unemployment welfare, unmarried mothers (though not their children) but the author of the article quiting it seems not to have noticed. That seems to be the closest to a definition anybody wants to make. Like so much political sloganising (eg devo-max) those invoking it seem to go to great lengths not to define it.

How much of the population can it be. Well "dawn of life can't really be more than 5 years but the large majority will be in families who don't get a lot of "welfare" indeed the vast majority will pay more in taxes than they get.. Pensioners will mostly be getting more in state pensions than they pay, but not that much more. As a ballpark I don't think we can describe more than about 10% of the population as "the most vulnerable" without robbing the term of meaning.

If somebody can find anybody who has defined it specifically as more than that I would be interested to see.

So do we have to have so much government to protect this group? 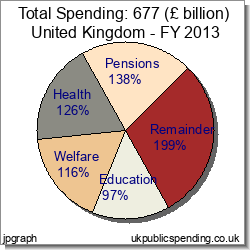 In a country of 62 million.

I don't think the worst enemy of those on social security could say that the average person on welfare get £109,000. Indeed the government have recently set up a limit of £28,000 for the most expensive household.

I would guess the average would be about 10% of that. I know the pie chart above shows 17% (£115) going to Welfare, excluding pensions and health but it doesn't show how much actually gets received, in cash, by those the government claims it is there to help.

So if 90% of the money ends up with "government workers and their friends" who are not, by any stretch of language "the most vulnerable in society" when government workers or their fakecharity friends use the term they are dishonestly using the genuinely vulnerable as human shields.

No - I had taken "the most vulnerable in society" to be "about 10% of that" total population which makes it 6.2 million.

You are right that government spending amounts to just over £10,000 per person (prob about £24,000 per employed person). This doesn't include enforced transfer payments like the carbon levy on electricity & certainly not the extra costs of regulatory restrictions on electricity (I think combined they come to about £4K per household). I don't know if it covers the TV licence.

I agree completely with Neil. It doesn't include the enforced transfer payments.