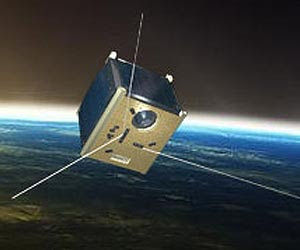 Some time ago I wrote about Clydespace, a satellite manufacturing company in Glasgow.

They must have done a good party for the journalists or something because suddenly they appeared in a whole range of newspapers and on BBC Newsnight Scotland. This is from the Mail - ignore the moronic headline and picture- that is the sub-editor's choice.


the company is to link three cubes together to create UKube-1 - which will be the first complete satellite to be assembled by Clyde Space.


It's part of a pilot programme from the UK Space Agency to test new technologies in space.

Mechanical design engineer Steven Kirk is well aware of its particular significance for Clyde Space - and for Scotland.

‘It's our first full platform,’ he said. ‘So by demonstrating this we can demonstrate that we can build a full satellite. We'll have the pedigree.
CubeSat is expected to enter orbit next year.

The underlying CubeSat concept came originally from America - to create a satellite 10cm by 10cm by 10cm.

More than 600 CubeSats have been launched so far. The Glasgow firm has made components for 40% of them.

There was a time when 80% of the metal hulled ships in the world were Clydebuilt. Some components in 40% of the cubesats off the world isn't quite the same but it isn't minor either.

As technology improves miniaturisation gets easier and there is no reason that satellites 10cm on a side cannot hold enough observational and computing capacity to match anything produced a few decades in even the largest satellites.

Another advantage is that, because they are so light a solar sale can be scaled down equally.

Taking advantage of the technological advances in micro- and nano-spacecraft over the past five years, The Planetary Society will build LightSail-1 with three Cubesat spacecraft. One Cubesat will form the central electronics and control module, and two additional Cubesats will house the solar sail module. Cameras, additional sensors, and a control system will be added to the basic Cubesat electronics bus.
LightSail-1 will have four triangular sails, arranged in a diamond shape resembling a giant kite. Constructed of 32 square meters of mylar, LightSail-1 will be placed in an orbit over 800 kilometers above Earth, high enough to escape the drag of Earth’s uppermost atmosphere. At that altitude the spacecraft will be subject only to the force of gravity keeping it in orbit and the pressure of sunlight on its sails increasing the orbital energy. The mission will give us a good, clean trial of sunlight as a means of propulsion.

But if a solar sail could take a cubesat to Mars and the miniaturisation technology has moved in....