Whatever Happened to the Iconic Bridge?

This goes back some time. Indeed it goes back to before I was doing this blog. Letter in the Herald 24 Novemebr 2003.

THE powers that be in Glasgow have decided to spend £40 million of our money on a footbridge at Broomielaw. Mind you, it will be an "iconic" footbridge. I think that means it will not be built on the old-fashioned engineering principle of doing the best job for the best price but on the new public works architectural principle of adding as many bells and whistles as somebody spending other people's money can be talked into.

This is one-tenth of the cost of a parliament building or the full price offered for building a parliament on Leith waterfront. It is 20 times the cost of a monorail from Glasgow Airport to Paisley Gilmour Street or from Central to Queen Street. It is enough fully to automate our Underground, thus substantially increasing capacity, and to run it free to the public for 10 years (which would obviously do far more than a bridge to give southsiders the benefit of visiting the west end the ostensible purpose of the bridge). It would pay for fixing five litter bins to every lampost, which I grant would be overkill. It would pay for building an arcology (a posh name for single building not only housing a lot of people but providing shops, pubs, restaurants, etc, to create a community unlike the traditional filing cabinets in the sky) providing homes for 1000 families, though this would make a profit for the ratepayers when sold. It could give a home computer to every Glasgow family with a kid under 15. It could provide a £10,000 rates holiday to 4000 new business start-ups. It could even, heavens forfend, produce a cut in the rates equal to £70 for every man, woman, and child.

We are now within the very short window between the project being only a feasibility study, so the public should not know about it, and the stage where the public should not be asked because it is to late to stop. Now is the time to decide if £40m for a footbridge a few hundred yards from the George V and Bell's bridges is a good idea. This, of course, assumes that the promised £40m will be kept to. Scottish Labour does not exactly have a good record in this area.

This is the bridge design they had decided would be sufficiently Iconioc to convince the world of the architectural sophictication of Glasgow Council. 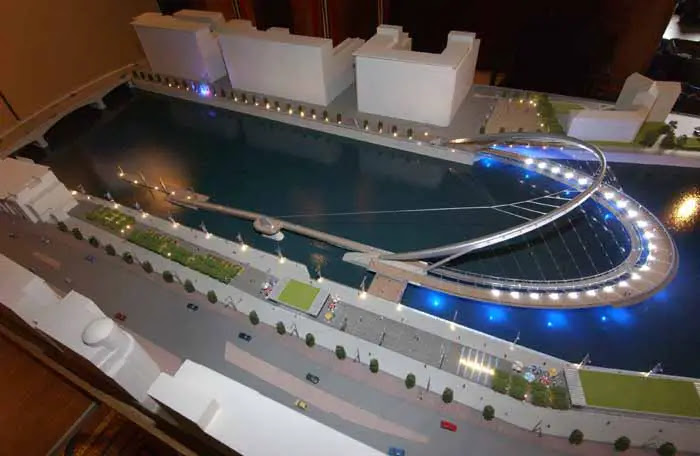 Incidentally the bridge at the left hand end, about 200 yds away, is a road bridge but with pavements so this "iconic" footbridge never actually served any serious traffic need. Still what's £40 million when its just the people paying.

At the time, still a LibDem I suggested this is exactly the sort of thing we could properly and successfully campaign against. Everybody I asked agreed that it was a ridiculous waste of £40 million. However I got shot down when the LD's councillor (there may have been 2) emailed me, annoyed because he was a strong supporter of this attempt to put Glasgow on the architectural map, footbridgewise.

So what happened. Well just because a bridge design wins a contract doesn't mean it gets built.

We did get a footbridge of a more pedestrian design (sorry).


The Tradeston Bridge is a pedestrian bridge across the River Clyde in Glasgow which opened on 14 May 2009. It links the districts of Anderston (on the north bank) to Tradeston (on the south bank) - the aim of the bridge being to aid the regeneration of Tradeston by giving it a direct link to the city's financial district on the western side of the city centre.

It still makes no traffic sense It is still a waste of money but now only of £7 million of our money rather than £40 million. If it is a choice between completely climbing down and wasting £7 million of other people's money what mainstream Scottish politician would have any doubt?

Did I make any difference - I have never been told by anybody involved that I did, or that I didn't. But then they wouldn't would they. The original silly scheme didn't get built. £33 million was saved (assuming it would have stayed on budget). I certainly did no harm to getting something somewhat more closely approaching common sense prevailing.

It may just have been that having built the "iconic" Squinty Bridge (which immediately broke due to the prefered bidders using inferior steel and the "iconic" tram museum (a tin shed designed by an Iranian architect) they were just iconicized out.

Comments:
I know there will be many difficulties and challenges but I am determined to do it. If it does not succeed then it will be a lesson for me as well http://run3play.com

I realize that nothing is fair but I'm still trying. I just want to do my best and what is possible
povaup.com