SKYE BRIDGE COST - COMPARINGFREE MARKET, GOVERNMENT PROJECTS AND THE MIX WE HAVE 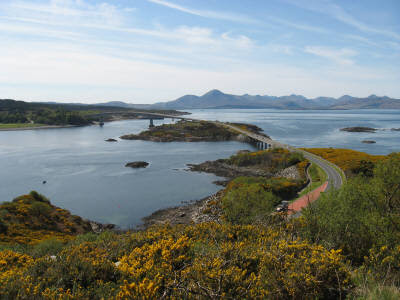 The Skye Bridge is regarded in Scotland as an example of what is wrong with the Public Finance Initiative (PFI) which involves government not running public projects but contracting with the private sector to pay for them and then leasing the properties back from them and being granted ownership after something like 20 years. In fact the Skye Bridge was not like that - the contractor was merely given the right to build the bridge and collect tolls from travellers. I also wish to argue that the debacle was entirely the fault of government.


In 1989 Conservative junior minister James Douglas-Hamilton announced a bidding round, requested tenders to construct a toll bridge..... The PFI plan was accepted, and received support from local MP Charles Kennedy and the local council in the full knowledge that it would be on a high-toll basis for a limited period. Although the bridge itself was built with PFI, the approach roads were the responsibility of the Scottish Office, which paid £15 million for the roads and associated improvements, and to cover the costs associated with decommissioning the ferry. ....  When the Bridge contract was first awarded, the partnership estimated it would cost around £15 million, although delays and design changes added significantly to the cost (to around £25 million

After the bridge had been completed there began a long political campaign against these tolls, though this had never been an issue when the alternative was not having a bridge.


The bridge, and the toll protest, became a continuing political issue. Following the 1997 General Election, the Labour-run Scottish Office introduced a scheme whereby tolls for locals were subsidised (the scheme cost a total of £7 million). Following the creation of the Scottish Parliament, the Scottish Labour Party joined in coalition with the Scottish Liberal Democrats, who had made the Skye Bridge toll abolition one of their priorities. With responsibility for Scotland's road network transferred from Westminster to the Scottish Executive, increased political pressure was placed on the toll's future. On 3 June 2004, Jim Wallace, the Enterprise Minister in the Scottish Executive announced that he hoped the bridge would be bought out, and tolls abolished, by the end of 2004. In line with this, on 21 December 2004, Scottish Transport Minister Nicol Stephen announced that the bridge had been purchased for approximately £27 million, and toll collection immediately ceased. During the preceding decade £33.3 million in tolls had been collected. Figures obtained by the BBC under freedom of information laws showed the consortium's operating costs on the bridge during this period had been only £3.5 million.

Thereby proving how wicked the capitalist bridge builders had been in ripping off both travellers and the government. Getting, according to some calculators £15m from the government initially + £33.3m in tolls + £27 m selling it back to them for building costs originally promised as £15m + £3.5m operating cost - a difference of £56.8m.

The alternative way of looking at it is that the government's £15m contribution was nothing to do with the contractor. It didn't go to the contractor but to government building of roads and a government bail out of a government owned ferry (Caledonian MacBrayne's) for not keeping their monopoly position. That the increase in the contractor's building costs from £15m to £25m for "

An alternative is looking at what the free enterprise or pure governmental costs could have been. Assuming the "  delays and design changes" were entirely the fault of government, an assumptio0n that those living in Scotland will not find improbable, it could indeed have been done for £15 million. On the other hand had government done it a decent rule of thumb would be that cost would have diminished with the square of distance covered by the longest span so comparing it to the new Forth Crossing (250 m compared to 1006 m) we should have expected it to cost {£2,300m X (250/1006)^2] about £142 million. So even with all the political stramash, involving a total reversal of their policy, for reasons unconnected to economic reality, the bridge cost roughly half what it would if the whole project had been run by government, or at least Scottish government.. That is, of course, assuming they hadn't simply blown the money and left us with nothing.

This is not to say it couldn't have been done far better simply by giving the contractors £25 million to build the bridge and road approaches, with"enterprise zone" rights to ignore government's ability to impose "delay and design changes" (see #45 here). That is what a competent non-parasitic government would have done

And regarding more competent government. John Swinney said we should build a new Forth Bridge because the option of a tunnel could cost £6.6bn. (#78 here) whereas as this unpublished letter of mine, sent to most Scottish papers, says


I think congratulations are due to the builders of the Hindhead tunnel in Surrey which, on 15th May, had its first walk through by members of the public. At 1.1 km this dual carriageway under the "Devil's Punchbowl" site of special scientific interest it is only about half the length that a Forth tunnel would be. It is also much more expensive than Norwegian tunnels are since they cost about £5 million per km. On the other hand this completed British tunnel costing £371 million seems to be considerably better managed than our government manage considering that Holyrood was told that a forth tunnel could not possibly be built for under £6.6 billion.