TRAPPED IN THE MIDDLE OF THE KELVINGROVE RIOT - NOT

A Glasgow "street party" to celebrate the royal wedding has been broken up by the polis. But what is so delicious about this jolly little riot is that it was triggered after the organisers took David Cameron at his word and set up a street party without permission of the local gauleiters.

Two teenagers had organised the rave in Glasgow's Kelvingrove Park, using facebook to advertise the event. Over four thousand turned up, many proceeding to get rat-arsed. Rather predictably chaos ensued as the drunken revellers turned violent. 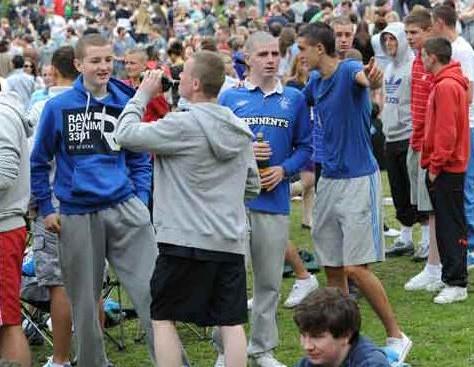 It was then left for the police to intervene, with officers on bicycles attempting to make arrests. Much to their surprise, this attempt went pear-shaped as they were surrounded by other "guests", who offered the police various helpful suggestions. 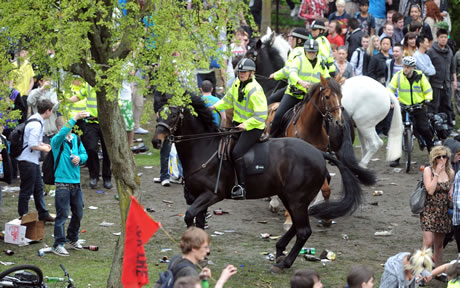 To entertain the rest of the bystanders, the police then obligingly organised a mounted charge on bottle-throwers, who had now promoted the event to a full-blown riot. As groups of "innocent" revellers caught up in the mayhem applauded the display, hundreds of missiles were thrown at the police, but only three were injured - police, that is ... no missiles were hurt in the making of this riot.

....But he (David Cameron) did say: "They have no right to stop you from having fun. I am the Prime Minister and I am telling you if you want to have a street party, you go ahead and have one".


However, many would assert that there is no greater entertainment for the average Glaswegian than for them to get smashed out of their skulls and then indulge in prolonged, gratuitous violence against the police. And unlike the wuzzies in Bristol, this lot managed to smash the windows of at least three police vans...{sarky English bastards - no offence]

I was there at about 4.20 yesterday. Me and my girlfriend went to the park to feed the ducks in the pond & possibly squirrels, knowing nothing about this. We immediately left because it was very noisy & crowded and not worth the effort. However I saw no violence or anything approaching it, nor were there any police visible, at least near the park entrance. I did, shortly after see a police car, lights and siren on racing that way, which, at the time, I said looked like overkill because the crowd had been there all day. Then a police helicopter turned up circling the park for several hours. Had I been there listening to the music I would have taken umbrage at the helicopter's noise, indeed living nearby I wasn't too pleased either.

This was not an aggressive crowd (It is in the posh area of Glasgow). My opinion is that had a few police been there from the beginning, just patrolling on foot, like bobbies used to, and ignoring the bylaws against having a drink in public, like sensible polis do, they could have avoided the stramash at a cost considerably lower than several hours of helicopter time.