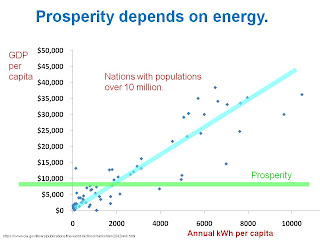 As Jerry Pournelle pointed out yesterday "energy prices are a major factor in economic growth, and everyone knows it." I have also previously calculated the amount of GNP produced by developed countries per kw of energy and it is clear that, except in places like Afghanistan the average was $3.90 and in Britain it $6.14 , the highest of any sizable country in the world.

It is therefore no surprise that China's economy ($2.45) is growing at 10% and in Britain "THE average UK wage in 2015 will be less in real terms than it was in 2003, according to a new analysis by a think-tank.

Published ahead of the launch of a commission on living standards in the UK, the figures from the Resolution Foundation underline the extent of the squeeze on families on middle incomes"

There are other things holding us back which is why I think the that growth of 23.8% annually is possible. However there can be and indeed is no real dispute that with a reasonable increase in electricity supply we would get comparable growth.

Nor has there been any dispute that, if we mass produced reactors, we could produce power at around 7% of current costs.

For most of this century it has been accepted in intellectual circles that the Soviet style planned economy had proven more successful than free enterprise because Stalin achieved a, then, world record growth rate of 10%. In my youth I inclined the same way and it is certainly something which anybody saying economic freedom works must explain. Here is my explanation.

In Britain the total role of the government is to prevent or delay construction of new power plant; to insist on the money going into windmillery which produces little power in the most expensive way; and absolutely to ensure a regulatory regime that massively increases costs.

Assuming we have a continuous supply of 50Gw (a simplification) a 23 increase would mean 12 new reactors in the first year, 14 the next, 17 the 3rd and 21 the next (a total of 64),  26 the 5th and 33 the 7th.. In fact it takes 3 years to build a reactor so basically a factory churning out 43 odd reactors a year could be guaranteed to sell the lot even if it sold only in Britain. Since up to 7 reactors have been put, side by side, on one site that number could be held without building any new sites, though it might involve moving a few fences back 100 yards.

With the new AP 1000 reactor currently retailable at £700 million; takinvg 3 years to produce the  reactor; a substantial, around 50% cut in regulatory parasitism; but still taking 3 years to complete each unit I would guess a factory mass producing a reactor a week would cost less than £30 billion plus time payments for the units from customers as they are being built. Stalin had to build the equivalent by main force but a free enterprise system could certainly do it with little more than giving permission, basing its regulatory regime on a proper comparison of the safety record of nuclear against other processes and guaranteeing purchase.

If government construction were competent it would be better to borrow that $30 billion and build it for the nation giving the Exchequer an enormous profit, but, as the Edinburgh trams and new Forth crossing prove, that may not be an option.

Whatever you say about Uncle Joe, for whom I retain a soft spot, he was constructive and never so cruel or destructive as to want to destroy 58% of his country's power supplies as the Holyrood numptocracy unanimously do. Nor are Westminster MPs {We don't know shale gas is, but whatever it is, we'd better stop it} much less Luddite.

more reactors without more sites
UPDATE I see that India has managed a 1 year increase of 35% in nuclear electricity so for us to aim at 23% does not appear overambitious.

Comments:
I like to get up early to go out and breathe fresh air. I feel that it is good for health and a good habit 19216811ll.com