This (and tomorrows following from it) come from something proposed by Joseph Friedlander some time ago.

He pointed out that the amount of information that can be transferred by transmission from orbit is a multiple of the power of the transmitter and of the receiver, OK and the distance.

Our current satellite broadcasters rely on satellites whose solar collectors give them around 2 kw - ie about 15 square feet.

There is no real limit to the size of collectors or anything else we can build in orbit because they don't have to stand up against gravity, wind, rain etc. Mirror that collect and focus sunlight could easily be a couple of miles across (call it 90 million square ft).

That means no limit to what information can be transported. The limit is more likely to be all the information humanity can produce.

There is a speed of light limit - it would take about 1/4 of a second for a signal to go to Geo and back. A matter of some importance for scientific measurement and selling shares but not for normal people.

Note also that if you have big expensive transmitters you can have very cheap inexpensive receivers down here.

All that is needed to cover the planet is 3 bases in geosynchronous orbit, 120 degrees apart.

I would also suggest that a large base in orbit would be able, using laser transmission, to provide individualised programming/telephones to small areas, dividing the planet on a grid. That,in turn, further increases the amount of information that can be sent to each individual spot. 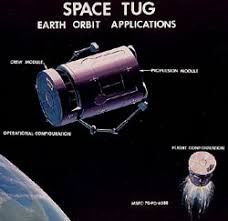 Once we build a shuttle that can get to low Earth orbit at commercial rates, something we can do at any time, we could have a, possibly unmanned, tug, powered with an electric ion rocket, to move material from low orbit to Geo. At which point building the 3 bases is simply a matter of keeping going.

Yes one we could have had 13 years ago

In addition to communications this gives us somewhere that people can live and replace or repair other satellites. Together with a tug we have the infrastructure to connect to anywhere in near orbit.

It would not be suitable for zero-G manufacturing, because a base as large as is needed here starts to produce the sort of microgravity that is not absolutely perfect for manufacturing, but it does work as a transfer point to such manufacturing bases. An ion rocket is slow but steady. It can be powered from nuclear electricity or even solar. Either way it has virtually zero fuel costs so that, once it is in place, actual running costs are low.

I have previously written about space elevators and while we will get them this is can be put in place much more quickly - indeed it follows directly from having a working shuttle or indeed the Russian Soyuz production line, which has been in place for decades. Essentially we could do it tomorrow,

Comments:
We offer a wide range of Pre Written Research Paper that seeks to provide a solution to all our clientele writing needs. Our writers have up doctorates credentials to give that assurance to our clientele of receiving high caliber Essay Writing Help Service to realize their aspirations of admirable grades affordably.