This idea reported by Next Big Future is rather neat. A conventional space elevator from the Moon suffers from the fact that it doesn't rotate (well OK only rotates in time with the orbit round Earth) so there just isn't the centripetal force to keep it up. Pity because the lunar gravity is so much lower that there is no real difficulty now in constructing strong enough cable.

However if we place the station at the L  point just above the centre point facing Earth and lock it in place with a weight (ie small asteroid) we have a stable system. 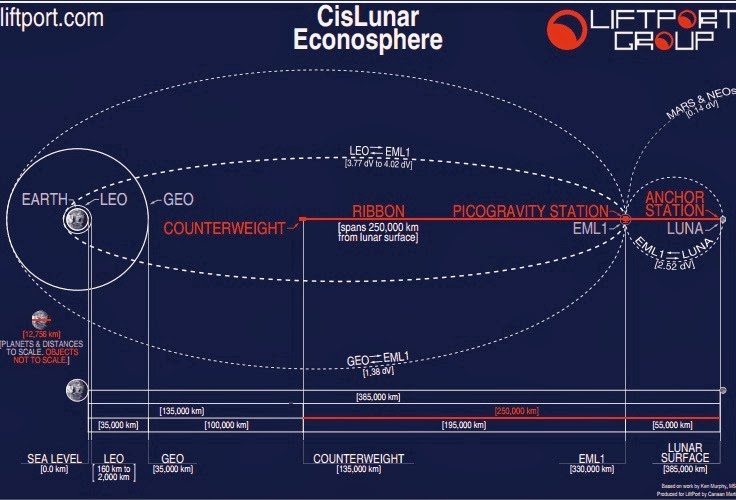 The proposers say this could be in place by 2019 and while I am sure they are technologically right (there seems to be nothing there not technologically possible today) it would require quite a lot of moving mass around and to have a market big enough to justify it would need a fair bit of space industrialisation. On current trends that means way beyond 2019 (on prsent trends, if we rely on NASA/ESA/etc it means never but lets not go there).

But if some country decided it was going to put 1% of what was put into owning Afghanistan (ie about $40 bn)(£25bn - 1/3rd of HS2, 10 Forth bridges) into this project it could be done even by that early date. It would establish the builder as, if not owner of the Moon, the nation able to exploit it FAR more easily than anybody else because only they could easily land and take off virtually unlimited amounts of material.

Couple of other gains:

1 - Lunar material is effectively unlimited in quantity. Moving it into orbit, where there is zero-G, means it can be processed (for example melted down using mirrors)  gives enormous opportunities for manufacturing in zero G - both small, materials with a molecular structure that can only be formed in zero-G, to vast orbital O'Neill colonies miles long.

2 -  The cable stretches beyond the stable point. Drop a spaceship off the end of that and it will fall towards the Earth. Earth being 250,000 miles away and 8,000 across is, so long as the ship produces a little lateral thrust, easy to miss. Indeed a ship launching from there will get a strong slingshot effect (building up speed by falling and then being pulled into a curve by gravity while passing Earth) which would give it enough extra speed to go (slowly) almost anywhere in the solar system.

Not bad for 1% of Afghanistan.

Comments:
Is Order Research Paper Services what you are looking for? The expertise of our professionals Argumentative Essay Writer allows them to successfully cover all areas of scholarly assignments in nearly all subject areas.