This is up on ThinkScotland. Please put any comments there

The European Space Agency probe Rosetta was recently switched on and is going to land on a comet, a rock which was old when the planet Earth was new.

The Chinese space agency recently landed its Jade Rabbit probe on the Moon, though it has now malfunctioned and it may well be unable to complete its mission.

NASA's Mars probe continues to send back data from that planet.

Less newsworthy but perhaps more important for opening up space to humanity generally is that SpaceX recently put their rocket in geosynchronous orbit. This is a much more difficult task than putting it in low Earth orbit, around 200km up, because geosynchronous is at a height of 36,000km. On the other hand it is commercially much more valuable because satellites in geo are constantly in the same spot in space and any spot on Earth it may want to transmit to is also on the same spot from its vantage. SpaceX has already resupplied the International Space Station and

India has managed to annoy those British politicians and leader writers, of "left" as much as "right" by having the presumption to prepare a probe to Mars which their erstwhile British rulers can't, or at least can't be bothered, doing.

A recent paper in Nature says that there are enormous amounts of water in Ceres the 2nd largest asteroid in the belt beyond Mars  perhaps more than in all Earth's oceans. If so, particularly since this is just 1 asteroid, we have enough water to supply a virtually unlimited human population in space, certainly larger than Earth's population.

Richard Branson hopes, hopes by the end of the year to have taken himself and  his family into suborbital space., though to be fair this has been real soon now for some time.

And companies have been set up to mine the asteroids and settle the Moon.

Unlike the first space age of the 1960s the diversity is obvious. We have very expensive space programmes from NASA ($18 billion a year), ESA ($11.2bn including the closely connected French, German and Italian ones). The intermediate Chinese ($1,3bn) and British ($414million). And the commercial ones which come out ahead (or go bust). Even NASA is not spending remotely as much as it did in the 1960s and NASA and ESA appear to be getting rather poor value for money.

Smaller countries may well have an advantage in the new space race because relatively little land area on Earth is needed as a launch pad to achieve an unlimited footprint in space. For commercial space smaller countries are ideally placed to set an attractive tax regime.

Thus it is sometimes said the Isle of Man is going to be the 4th country to put a man on the Moon, through space companies registered there. But they have competition for that title from California who are also proposing such tax breaks. Also from Singapore and Dubai who have both built their own space centres. When we are dealing with an industry growing at least 10% a year the attraction of getting in on the ground floor and becoming an industry hub is obvious. Well obvious to some - Virgin chose to set their northern launch site in Sweden after finding nobody in the government of Scotland, their first choice, was interested.

In the long term, permanent human settlement of space must make money or it is ultimately a fashion, subject to being closed down at any time by politics. However it long has made a profit. Space industries (mainly communication and weather satellites) were worth £160 bn a year in 2009 and has been growing at 10% a year.

The sky is considerably short of the limit for space industrialisation. The amount of cheap energy from solar power satellites is unlimited; mineral resources far beyond everything on Earth; real estate also unlimited; satellite TV and communications may look like a mature industry but in fact, since the amount of information is directly proportional to the signal power and communication satellites now are powered by a few metres of solar cells, transmissions can still be increased several 10s of times at least.

Now I'd like to talk about a couple of fairly new ideas, which have the chance to take humanity, or at least our engineering, anywhere in the Solar System. And the major Scottish contribution to it.

Over the last few years we have seen the development of very small modular satellites in a 10 cm cube. Known as cubesats these are the economic equivalent of shipping containers, except small. Units of self contained materials. 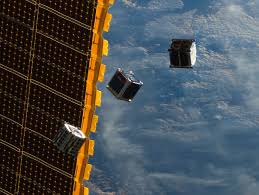 These work because of Moore's Law. This is the observed fact that computer capacity, and thus also a lot of instrumentation, has been doubling every 2 years since the 1940s. That means a million times since the 1970s. You can buy a mobile phone now that has more capacity than all the computer programming available to NASA for the Moon landings. And you can put it in a device the size of a mobile phone - or several times more in a cubesat. The first Voyager spacecraft, which sent us the first pictures of the outer planets and moons, was launched in 1977. It was 9ft x 21 ft x 57 ft  (a mere 300,000 times the size of a cubesat, well actually much less because it doesn't fill most of that space). A box 4 inches on a side can now hold far processing capacity.

And a Scottish firm (if I were being chauvinist I would say Glasgow firm) have a major component in 40% of the world's cubesats. Theoretically that is potentially comparable to the time at the beginning of the 20thC  when 90% of all the world's metal hulled shipping tonnage had been built on Britain and 90% on the Clyde. That was when such shipping was at the technological cutting edge.

CubeSats, with their advantages of modularity, are predicted to do for satellites what PCs have done for computing. It's now possible to buy components and assemble them as a kit, and Clyde Space already provides an online credit card purchasing system for items....

Clyde Space is also expert in the design of miniature power systems for CubeSats, for which they have around 40% of the global market.

And as all new ideas generate new ideas of their own, an engine to power such a cubesat is now being designed.

Benjamin Longmier, Michigan University, is developing the CubeSat Ambipolar Thruster (CAT), a new rocket propulsion system powered by the Sun and propelled by water, which will push small spacecraft like CubeSats around and far beyond the Earth.

If you can land a cubesat on one of the asteroids, and we can, then we can use ground based sonar to build up a geological (asterological - the language hasn't caught up with our capabilities) picture of what each one contains and how it is made up. For $1 million - oil explorers on Earth wouldn't get out of bed for that.

If the 1960s space race was the first generation project and SpaceX making commercial trips to orbit and these other things are the second then what is now being worked on - the ability to send thousands of probes to each of the asteroids and moons and comets too, across the Solar System is the opening of the 3rd and it is opening now. 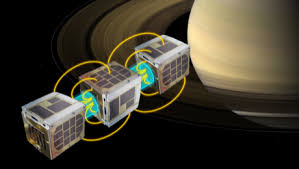