The Suez Canal has always been a choke point in world trade. The earliest link was under the Pharoahs who constructed a link from the mouth of the Nile 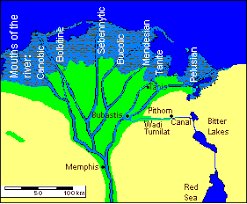 There is an existing record from the time of an Egyptian expedition that sailed into the Red Sea and much later returned through the Mediterranean, having circumnavigated Africa. This is added credibility because it describes the noon Sun as moving to the north of the sky as they passed the equator, something they couldn't have expected without experiencing it.

The Victorian canal did indeed cut travel times to India, making it the lynchpin of the Empire.

Since then the size of ships have grown and grown and grown again. Most of the world's oil is transported in tankers with a capacity of about 1 million tons. Container ships, while much smaller are still enormous. This means that many of them have to take the longer route round Africa.

The great advantage this canal has over the Panama version is that it is through flat land, relatively easy to dig and requiring no locks. As such it should be comparatively simple to expand.

I suggest simply increasing the number of dredgers so that, rather than keeping pace with silting they roll back the canal edges and bottoms. A permanent process but not a particularly complex one.

There have been promises over the years to begin a widening process time after time but not much in the way of action. This says it will start in 1982 and this that it will be completed in 2010.

Looking at the map it seems also possible that the canal could be substantially shortened by cutting through surrounding sea/march lands. 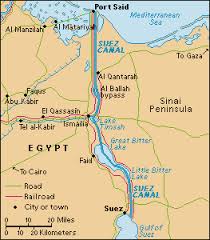 Also worth pointing out that Singapore built its economy on being on a massive world trade route, perfectly located to be a transhipment and warehousing dock. One end or other should be even more perfectly located. Possibly at the Red sea end where the seaways are not being used for other purposes.

It has just been announced that the Chinese are going to finance a new Americas canal through Nicaragua for $40 bn (£24bn) but that is technically orders of magnitude more complex than what I am proposing.

Perhaps now is the  time for an international repurchase of the Suez Canal, with satisfactory extraterritoriality guarantees. The Egyptian government have not run it that well; have other things to concentrate on now; definitely need the money; and should appreciate the jobs such a transhipment port could bring. 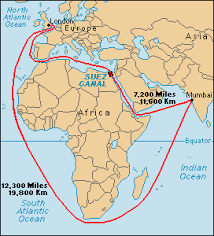 Comments:
"something they couldn't have expected without experiencing it": yes they could; they knew the world was round.

Personally I very much doubt the yarn.

This was much earlier than Eratosthenes who calculated it.

Checking up I find that Herodotus, who reported it, doubted the truth of the voyage precisely because they said the Sun angle changed so he, at least, didn't believe the Earth to be round then. http://en.wikipedia.org/wiki/Spherical_Earth#Classical_Greece
--------------------
We have indeed. I am avoiding bringing up the propriety of that event - however empires go in cycles and today we have African countries & Afghanistan being run by western "mentors" rather than "colonial rulers". A political entity as powerful as the British Empire of Victoria (ie the US, NATO, China a UN authorised multinational) would be able to maintain extraterritoriality as the more powerful US was over their canal.

Yes, but Herodotus was only a historian. There were mathematicians of his era who knew the world was round and so could have added the sun story to the rest of it. Personally I find the idea of the Egyptians being able to find a crew of Phoenicians, whose experience would be largely in the benign waters of the Mediterranean, happy to sail off into the oceanic unknown for a year or three pretty unlikely. It's particularly impressive that they would have found a way of getting up the West African coast (the great bulge I mean) against wind and currents, when that problem seems to have inhibited Carthaginian and Roman voyages down that coast; the problem wasn't solved until the methodical Portuguese explorations in the 14th and 15th centuries.

Look at the map of currents at the foot of this link:
http://en.wikipedia.org/wiki/Mozambique_Current

Would you have set off down the coast between Madagascar and Mozambique with no confidence that you'd ever be able to get back against the current if you wanted to?

Even assuming they got round the Cape against the Roaring Forties, presumably by rowing hard, how were they to survive the long haul north along the parched Kalahari coast: what would they use for drinking water? And again, would they really want to go north without a clue how they could return south if things went badly?

How would they be confident that they'd find land along their route that would be suitable for raising a harvest of Mediterranean crops? What would they eat while they waited for their harvest? What cultivation equipment would they take with them?

It's a wonderful yarn, but I suspect the first rule of exploratory navigation is "Be sure you know how to get back again if things go wrong." This journey would have to break that rule repeatedly. That's what caused the problem for Romans and Carthaginians: they know how to get south, but were not confident about how to return. (Apart, presumably, from walking back!)

I can easily believe in voyages part way down the East African coast. (Presumably people had discovered how to use the monsoon winds to get back again.) I believe in Carthaginian voyages to the Canaries (and beyond) and back. I suspect somebody lashed these two sorts of voyages together with the idea of a round earth, and concocted the story.

"Most of the world's oil is transported in tankers of a capacity of about a million tonnes" -err no it isn't, as the world's largest tanker is under 600,000 tonnes and only some of that is cargo. Why spoil an interesting idea with gross exaggeration? Nor is there a great rush to build a million tonne tanker ,because limits on what you can build set by the strength and price of the materials used make it increasingly expensive not just in absolute terms but it what it then costs per tonne mile of cargo transported.There are also limits to the scale of present dry dock facilities for building such monsters and perhaps not the market for enough of them to build them. Aside from the restriction of seaways like the major canals, the terminal facilities have to be similarly enlarged and the economics of that are far from straight forward.

Point taken Anon. I had heard that million ton tankers were common and stand corrected. I would like to see Hunterston expanded as a deep water port & have written here about expanding the dreadful road links.