"In human years, this would be like a 60-year-old converting to a 20-year-old in these specific areas"

"A mouse is as much of a miracle of biology as an elephant, but the elephant is more impressive"
Robert A. Heinlein

Bear that in mind when reading this from Next Big Future:

Researchers have discovered a cause of aging in mammals that may be reversible.

The essence of this finding is a series of molecular events that enable communication inside cells between the nucleus and mitochondria. As communication breaks down, aging accelerates. By administering a molecule naturally produced by the human body, scientists restored the communication network in older mice. Subsequent tissue samples showed key biological hallmarks that were comparable to those of much younger animals. 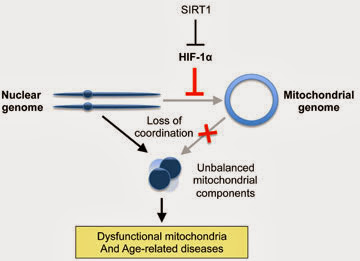 Ever since eukaryotes subsumed the bacterial ancestor of mitochondria, the nuclear and mitochondrial genomes have had to closely coordinate their activities, as each encode different subunits of the oxidative phosphorylation (OXPHOS) system. Mitochondrial dysfunction is a hallmark of aging, but its causes are debated. We show that, during aging, there is a specific loss of mitochondrial, but not nuclear, encoded OXPHOS subunits. We trace the cause to an alternate PGC-1α/β-independent pathway of nuclear-mitochondrial communication that is induced by a decline in nuclear NAD+ and the accumulation of HIF-1α under normoxic conditions, with parallels to Warburg reprogramming. Deleting SIRT1 accelerates this process, whereas raising NAD+ levels in old mice restores mitochondrial function to that of a young mouse in a SIRT1-dependent manner. Thus, a pseudohypoxic state that disrupts PGC-1α/β-independent nuclear-mitochondrial communication contributes to the decline in mitochondrial function with age, a process that is apparently reversible.

Mitochondria are often referred to as the cell's "powerhouse," generating chemical energy to carry out essential biological functions. These self-contained organelles, which live inside our cells and house their own small genomes, have long been identified as key biological players in aging. As they become increasingly dysfunctional overtime, many age-related conditions such as Alzheimer’s disease and diabetes gradually set in.

Researchers have generally been skeptical of the idea that aging can be reversed, due mainly to the prevailing theory that age-related ills are the result of mutations in mitochondrial DNA—and mutations cannot be reversed.

Sinclair and his group have been studying the fundamental science of aging—which is broadly defined as the gradual decline in function with time—for many years, primarily focusing on a group of genes called sirtuins. Previous studies from his lab showed that one of these genes, SIRT1, was activated by the compound resveratrol, which is found in grapes, red wine and certain nuts.

Ana Gomes, a postdoctoral scientist in the Sinclair lab, had been studying mice in which this SIRT1 gene had been removed. While they accurately predicted that these mice would show signs of aging, including mitochondrial dysfunction, the researchers were surprised to find that most mitochondrial proteins coming from the cell’s nucleus were at normal levels; only those encoded by the mitochondrial genome were reduced.

“This was at odds with what the literature suggested,” said Gomes.

As Gomes and her colleagues investigated potential causes for this, they discovered an intricate cascade of events that begins with a chemical called NAD and concludes with a key molecule that shuttles information and coordinates activities between the cell’s nuclear genome and the mitochondrial genome. Cells stay healthy as long as coordination between the genomes remains fluid. SIRT1’s role is intermediary, akin to a security guard; it assures that a meddlesome molecule called HIF-1 does not interfere with communication.

For reasons still unclear, as we age, levels of the initial chemical NAD decline. Without sufficient NAD, SIRT1 loses its ability to keep tabs on HIF-1. Levels of HIF-1 escalate and begin wreaking havoc on the otherwise smooth cross-genome communication. Over time, the research team found, this loss of communication reduces the cell's ability to make energy, and signs of aging and disease become apparent.

“This particular component of the aging process had never before been described,” said Gomes.

While the breakdown of this process causes a rapid decline in mitochondrial function, other signs of aging take longer to occur. Gomes found that by administering an endogenous compound that cells transform into NAD, she could repair the broken network and rapidly restore communication and mitochondrial function. If the compound was given early enough—prior to excessive mutation accumulation—within days, some aspects of the aging process could be reversed.

Examining muscle from two-year-old mice that had been given the NAD-producing compound for just one week, the researchers looked for indicators of insulin resistance, inflammation and muscle wasting. In all three instances, tissue from the mice resembled that of six-month-old mice. In human years, this would be like a 60-year-old converting to a 20-year-old in these specific areas.
One particularly important aspect of this finding involvesHIF-1. More than just an intrusive molecule that foils communication, HIF-1 normally switches on when the body is deprived of oxygen. Otherwise, it remains silent. Cancer, however, is known to activate and hijack HIF-1. Researchers have been investigating the precise role HIF-1 plays in cancer growth.

“There’s clearly much more work to be done here, but if these results stand, then certain aspects of aging may be reversible if caught early,” said Sinclair.

The researchers are now looking at the longer-term outcomes of the NAD-producing compound in mice and how it affects the mouse as a whole. They are also exploring whether the compound can be used to safely treat rare mitochondrial diseases or more common diseases such as Type 1 and Type 2 diabetes. Longer term, Sinclair plans to test if the compound will give mice a healthier, longer life.
################################################
Lets not overstate it. A scientific claim shouldn't be treated very seriously until it has been repeated. On the other hand is impressive and there is quite a lot of other work going on on what causes and can be done about aging, so somebody getting such a result isn't so strange.
I have previously written about the M-Prize, put up by the Methuselah Foundation. This is a relatively small prize awarded for extending the life of a mouse.
"pure science prizes, like the M-Prize whose importance to aging research cannot easily be underestimated, has achieved repeated successes with funding which government would consider insufficient to carry as pocket change."
Earlier I went into some detail about the M-Prize:
The Methuselah Mouse prize is a very good example of how to use such prices since actual profits to be made in extending the lives of mice are minimal but the possible crossover to humans when it has been achieved is unlimited. They also, having made awards, have a proven record of success.
And I have mentioned it in passing several times here, and once when a lecturer at the Royal Phil spoke on aging asked his opinion of the prize - he hadn't head of it but then he wasn't confident of such research.
And then a few weeks ago I mentioned the future of aging research on Brian's "Debate", though never expected any such speedy confirmation.
==================
No doubt this research would have been done, though somewhat later, without the spur of this prize since the spur of ending aging is a potentially enormous one though further away. However "somewhat later" is equivalent to millions of lives.
I expect the major contribution to this research by government will turn out to be regulating, slowing and perhaps preventing it in case it turns out the cure turns out to be carcinogenic or something. The idiocy of that is obvious and it may well be that the governments of countries not run by anti-progress Luddites will appreciate this.

Comments:
If indeed biomedical research makes much longer and less disease dominated lives a reality, then developing mass space travel becomes ever more urgent. We as a species find it very difficult to manage our propensity to reproduce, or to find peaceful ways to limit personal selfishness and greed. Without much more room and time to come to terms with all the implications of greatly increased lifespan we could well fight each other so hard as to put ourselves and many other species at risk of extinction.

A spacefaring civilisation, even one limited to the solar system, would likely be too widely dispersed to be centrally governable -- certainly by governments at the bottom of earth's gravity well, probably even by space-based ones. It might therefore approximate somewhat to the small, exit-friendly city-states envisaged by some. Rather than engage in the hopeless task of trying to start such polities here on earth, interested people might therefore concentrate on funding spacefaring technologies.

Also a spacefaring civilisation, if it involved thousands, or millions, of very similar self governing O'Neill colonies, would turn "social science" into an experimental science.

Up to now when one country has been more successful than another it has been blamed on local factors. With such settlements or equatorial floating islands which I also favour, we will know what factors vary and with what results.

As an addition to my earlier comment what would greatly boost the success of mass space travel and occupation would be the development of a lightweight radiation shield. It could well follow on from high temperature superconductors.

Actually, I am being to cruel. Steve is useful.

Robert A. Heinlein is a well-qualified researcher and blog author and I personally consider as an active Custom Essay UK Writer that aging research is not a small topic and it cannot be underestimated easily.

Hi
I am Angelika Erby and I am a student at Nj high school. I liked your way of thoughts.
Keep it up!

Hi
I am Lara William and I study in a Bradford University in the United Kingdom. By profession, I am CEO of a Digital Marketing Company working for universities in the UK. I have read this past a couple of days ago and I am really impressed by the services and will hire most of the people to form your company

I really enjoy simply reading all of your weblogs. Simply wanted to inform you that you have people like me who appreciate your work. Definitely a great post. Hats off to you! The information that you have provided is very helpful picbear

Roughly 20 million Americans suffer from social mental disorder. And who is taking advantage of all of this anxiety? The drug industry, of course! However, there's a quiet movement brewing behind the scenes of individuals who are uninterested with being Adult Adhd Psychiatrist Texas told they have to require a pill the remainder of their lives. These bold individuals are taking matters into their own hands and learning the way to cure their social anxiety with simple, easy to know techniques.