This links to an extensive report by McKinsey & Co on X-Prizes along with prizes of all sorts. It is a few years old now and not quite as enthusiastic as I am. This is largely because it doesn't foresee the sort of mass spending on prizes I do. Also by not concentrating on technology prizes it is concerned about how much the prize reflects glory on the awarder and worries that 2 much money spent on prizes will mean some go unreported. I see X-Prizes purely as a way of stimulating innovation - if it also makes the field more respected that is gravy.

However the graphs are valuable.

This is the recent increase in prizes in recent years. However it includes more conventional prizes like the Booker and other arts prizes which have barely risen so it considerably understates the rise in technology prizes. 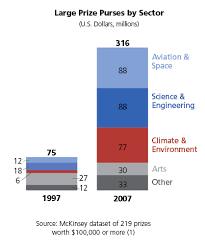 The report also says that 52% of prizes by value comes from foundations, 27% from corporations and only 17% from government, a ratio we should be prepared to work with.
As part of McKinsey's concern about numerous prizes it calculates that there is an average 0.0275 rise in publicity for prizes per $1,000 in value but that this average varies widely. I'm happy with that - it suggests that good prizes will get publicity, that there is a major place for even quite small prizes but that even so multi-million £ prizes are not going to go unnoticed.
It also has a choice tree which concludes that prizes alone are the optimum when there is a clear definable target and many possible winners willing to take a risk which applies in technology cases unless the project is so big only 1 company/conglomerate can undertake it.
I am comfortable with that, bearing in mind that when such a conglomerate says this (& says it should get a grant) it may not be unbiased and if a prize is offered to the rest of the world it will do no harm - if the conglomerate come in first the prize isn't won. By this rule the best way to promote virtually any technology is through prizes, occasionally with a grant to a preferred bidder (which should never exceed the prize value and be repayable out of prize money if the bidder wins).