Idenhtification Of A Climate Changing Volcano About 1275AD

"radiocarbon dating of dead plant material from beneath the ice caps on Baffin Island and Iceland, as well as ice and sediment core data, to determine that the cold summers and ice growth began abruptly between 1275 and 1300 C.E. (and became intensified between 1430 and 1455 C.E.). Such a sudden onset, they noted in Geophysical Research Letters in 2012, pointed to a huge volcanic eruption injecting sulfur into the stratosphere and starting the cooling. Subsequent, unusually large and frequent eruptions of other volcanoes, as well as sea-ice/ocean feedbacks persisting long after the aerosols have been removed from the atmosphere, may have prolonged the cooling through the 1700s.

Volcanologist Franck Lavigne of the Université Paris in and colleagues now think they’ve identified the volcano in question: Indonesia’s Samalas. ...... put the eruption’s magnitude at a minimum of 7 on the volcanic explosivity index (which has a scale of 1 to 8)—making it one of the largest known in the Holocene. The eruption, the authors note, was on the scale of the Tambora eruption of 1815, and more powerful than Krakatoa in 1883.

The team also performed radiocarbon analyses on carbonized tree trunks and branches buried within the pyroclastic deposits to confirm the date of the eruption; it could not, they concluded, have happened before 1257 C.E., and certainly happened in the 13th century." 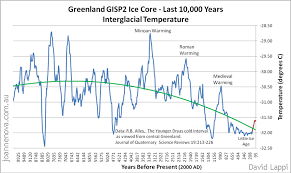 1275 AD is about 750 years ago so this looks like it is after the height of the MWP. Actually it might coi8ncide with a short plateau in the dropping temperature.

(Also it shows we are not unusually, let alone catastrophically warm now)

:But 1275 ish wasn't the end of the Medieval warming. That as the article acknowledges was about 1430.

In the same way neither Tamboro, said to be about the same strength as this, nor Krakatoa were the start of cooling trends, or even stopped the rise in temperature (even though serious CO2 rise doesn't start till the 1950s.

This strongly suggests that while eruptions can, unsurprisingly, produce years without summers they have little or no effect after about 2 years.
What this does confirm is that we can reasonably expect at least 2 tamboro events per millennium & I would guess at least 4 times as many Krakatoa/Laki sized ones. Which makes another about due

Here are some eruptions over the last 1,000 years.

So although there have been a fair number of these over the millennium Tambora in 1815 seems to be the largest. And that took place in a period of rising temperatures as we came out of the Little Ice Age (& incidentally was well before industrialisation had produced significant CO2 so that can't have been causing the rise).

So basically volcanos can't be tipping points for climate change though they do produce unhelpful short term (ie 1 or a few years) changes. No problem being around 10 years later but might be nasty the next year.

Previous to Tambora the big one was Santorini, 1650 (60km) (also site of the Santorini eruption believed to be Atlantis) so it would be statistically reasonable to expect something similar fairly soon,