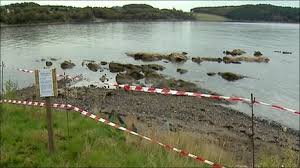 BROWN  "the Ministry of Defence will have to make a decision, as the Scottish Environment Protection Agency will be bound to designate this area as the only radiation-contaminated area in the United Kingdom if action is not taken by the MOD as soon as possible. It is an amazing fact that we have nuclear waste sites, we have nuclear submarines and we have weapons in different parts of the United Kingdom, but this small beach in the heart of my constituency, which is on a walkway, the coastal path of Fife, is liable to be named the first ever radiation-contaminated area in the UK."

" it is only in the past few days that I have discovered the scale of the problem in the greatest detail, thanks to the risk assessment report and to the appropriate person report, of which the Minister will no doubt be aware. That makes it clear that the contamination of the beach area in Dalgety Bay arises from the fact that starting in 1946 and for 13 years, wartime fighter planes and other planes in the possession of the Royal Air Force were scrapped and incinerated before the ash, including radiated parts, was dumped in the area of Dalgety Bay. In 1946 alone, 800 planes were scrapped and their parts dumped in this area of my constituency. From 1946 to 1959, not a few planes—not tens, or twenties, or scores—but hundreds were broken up before their parts were incinerated and the ash, including radiated parts, was dumped in the area."

"because of coastal erosion the particles are being brought up to the surface"
note that coastal erosion is a geological process which would reveal particles laid down 10s of millions not merely tens of years ago.

He denounces an MOD paper suggesting an alleged radioactive object mentioned in 1990 was more than a ‘theoretical’ object—it is not clear whether an object with the properties required has been found or whether there is simply the possibility that such an object might exist.”
However, these objects were admitted in 1990"  - so clearly this object, theoretical or not, cannot be produced by SEPA, or perhaps they choose not to produce it because it could be seen to be a fraud - that makes "theoretical object" look like a fairly kindly term for the MoD to use of something that, at best, doesn't exist.

"Contamination has been proven. Risks do remain" repeating a lie, well 2 lies, doesn't make them true

Murrison
"expended £825,000 to date undertaking a site investigation, as well as a monitoring and recovery programme along the foreshore. The right hon. Gentleman will recall the work we have undertaken in a number of gardens belonging to his constituents where radium was discovered, at a cost of some £500,000."  Asssuming SEPA, the protagonist here, has spent about 5 times as much we can estimate the total bill to the taxpayer, for doing absolutely nothing worth doing is about £5 million

He then goes on to say that there is no factual basis to the claim of 800 aircraft being scrapped there. In this regard I note that I asked that precise question last year and SEPA could not or did not answer. If, as they claim, they knew in 1990 that there were 800 planes there then, by definition, they knew it last year and thus were deliberately lying when they claimed not to know it. However 800 planes disassembled in 1946 alone is an awful lot - 4 per working day - and such disassembly production line would hardly have gone unnoticed. While not wishing to suggest the claim represents anything other than the pinnacle of honesty to which SEPA and Brown ever aspire I think it obvious it is a total lie.

He then reverses Brown's scare about this potentially being the only "radiation contaminated area" in the country when there are so many places where real radiation work is being done.

All in all the MoD may actually be standing more steady under fire. Of course battles were not won by only that tactic. You have to shoot back. For example the MoD could release their own Geiger counter readings of adjoining beaches, something SEPA, in a manner incompatible with ANY respect for scientific principles, have always refused to do - and for good measure do a reading of the car park in SEPA's Aberdeenshire office, which would certainly be much higher.

Comments:
I do not know how to go about a freedom of information request and what obstacles and obscuration may be put in my way, but is it possible to get specific information about the actual radiation measurements and if they are withheld what national security or commercial confidentiality issues are at risk ?
Why also do powerful and rich media reporters not enter the fray in the public interest. Oh and where do UKIP stand on this "issue".

Just email or write to the appropriate authority saying "I am asking under the terms of the freedom of Information Act...." & that makes it legal with a duty by them to answer in 20 working days (it is wise to ask for an acknowledgement). The reply may only say the information "isn't held"/is covered by commercial confidentiality/is excluded on grounds of journalistic confidentiality (everything, even who was on QT is journalistically confidential at the BBC).

Nobody ever replies in less than 20 working days; sometimes they just pretend the email was never received. Nonetheless even when the answer is non-responsive, as in virtually everything from SEPAA that5 is itself informative as in the fact that they did not have any knowledge of how many planes were at Dalgety Bay but have now, almost certainly falsely, briefed Brown that it was 800 in one year alone.