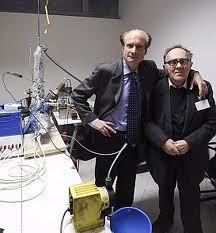 Al Fin, Brave New Future and New Energy and Fuel have both been reporting on cold fusion, now known as Low Energy Nuclear Reaction" (LENR) , which  is now not only laboeratory proven but they are currently stating to manyfacture commercial batteries.


There have been more claims of confirmation of the results in Sweden.


1. The industrial 1000 kW plant, a set of three hundred 4 kW reactors, now under construction in Athens, is expected to become operational in October 2011, according to Rossi. The cost of electricity from such plants, if widely used, is expected to be ten times lower than from our coal plants. Another desirable feature of the claimed reactor is that it “doesn’t produce radioactive waste".

2. Rossi says that about 30% of nickel was turned into copper, after 6 months of uninterrupted operation. At first glance this seems to agree with calculations based on simple assumptions.

Cold fusion has been bedeviled by accusations of experiments being found to be unrepeatable (a polite way oof saying false). However while some laboratories have failed to rpeat them many others have managed and the body of evidence of results, worldwide, which cannot be explained in chemical terms is overwhelming. That, in turn, has meant patent ofices have refused to accept patents which in turn means anybody wanting to makemoney out of their work simply cannoot publicly give the details that would permit replication. Vicious circle and one that has delayed developmentby at least a decade. Now.


What happened was Mr. Rossi and Professor Focardi with Dr. David Bianchini, and Dr. Giuseppe Levi of Bologna University had two guest observers. One guest observers was Hanno Essen, associate professor of theoretical physics at the Swedish Royal Institute of Technology, who is the chairman of the Swedish Skeptics Society and the other guest observer was Professor Sven Kullander of Uppsala University, who is also chairman of the Royal Swedish Academy of Sciences Energy Committee. One will think the Swedes take the Rossi Focardi Cold Fusion reactor seriously.
Kullander and Essen were permitted to examine the setup, check for hidden power supplies, and then fill the reactor with hydrogen, calibrate the volume of water flow, monitor the temperature of the water flow in and out of the system, and observe the entire experiment.
The reactor contained 50 grams of nickel powder and .11 grams of hydrogen. In their report (a pdf file) they state, “We had free access to the heater electric supply, to the inlet water hose, to the outlet steam valve and water hose, and to the hydrogen gas feed pipe. The total weight of the device was estimated to be around 4 kg.”
The experiment’s results are an averaged constant production of 4.69 kW (4690 watts or about 47-100 watt light bubs) of power for almost six hours. The input was on average 330 watts, of which 30 watts was used by the electronics controlling the setup. This calculates to about fifteen times the energy produced by the device in comparison to the energy input.
Kullander and Essen have also ruled out that the energy could be coming from a chemical source. They stated, “Any chemical process for producing 25 kWh from any fuel in a 50 cm3 container can be ruled out. The only alternative explanation is that there is some kind of a nuclear process that gives rise to the measured energy production.” This is a noteworthy statement coming from a report written not only by professional scientists, but also by the Chairman of Sweden’s VoF.

To cap it all, Rossi provided Kullander and Essen a sample of his fresh nickel powder and a sample of nickel powder that had been in an active reactor for two and a half months. Elemental and isotopic analysis has been performed on the samples utilizing both X-ray Fluorescence and Inductively Coupled Plasma Mass Spectrometry. The reported result shows that the fresh nickel powder was almost totally pure nickel and the reactor used nickel powder contained 10% copper and 11% iron. The two copper isotopes detected were Cu63 and Cu65. Kullander has stated his understanding this qualifies as proof of nuclear reactions is taking place in the reactor.

Things are moving along. What’s new is the iron found. The missing is still the catalyst. What isn’t finished and of perhaps the greatest interest to experienced inventors and developers is the progress on the patent application. Let’s hope this sort of demonstration wins the co-operation of the patent examiners – that’s the next big step.

=============================
A point I would like to make about this is that it is NOTas much of an unpredented breakthough as it seems. "10 times less than coal if widely used" is only similar to what I have suggested current nuclear plants could produce if  they were widely enough used to allow mass production.

Independently we see the Shale gas revolution which will give us cheaper power. Tar sands hold potential reserves greater thanall the official oil reserves. Methane hydrates have energy orders of magnitude greater.  Also the possibility of using algae as an unlimited source of inexpensive oil.

And when we get into space there is enough solar power to provide unlimited energy forever with almost no running costs.

The politicians almost universally insist that "the era of cheap energy is over" and are using regulatory means to artificially push up prices and even create blackouts. We can see the way the eco-fascists are deperately trying to find some excuse, or none, to ban shale gas and Canadian tar oil, as they did with nuclear and GM foods/medicines. This is because The whole aim of practical politics is to keep the populace alarmed (and hence clamorous to be led to safety) by menacing it with an endless series of hobgoblins, all of them imaginary."(Henry Louis Mencken)

Lack of energy is not our problem. Our problem is to much government. The degree to which government parasitism is holding us down can hardly be overestimated but consider that, over the last 30 years China's 10% annual growth mean they have got 18 times better off while real incomes here have only marginally increased. Note that China is hardly an example of total lack of government parasitism, it is simply that it has moved in a liberal* direction, whereas we have done the opposite. We are more restrained by the state, often acting in the name of the eco-fascist movement the state is funding, than any medieval peasant was because the opportunities we are deprived of are far greater than existed then.

" `See what free men can do.' That was the inscription on the photo. By, the man who built it-Dick Rhutan! Who flew Voyager around the world on one tank of gas. That Voyager."

* By liberal I mean traditional liberal values, which revolve around human freedom, not the various sorts of  special interest groups, banners-of-things and eco-fascists who have itroduced an entirely new range of principles under the old name saying "principles change with time".

Comments:
Yeah! How many years 'til they are building these things commercially?

Well if the production plant becomes operational in Oct 2011 (point 1) then in theory shortly after. Granted a big "if" but the bigger one one is "if government will allow us to buy them". Precautionart Principle - that "while many things should be done nothing should ever be done for the first time" Sir H. Appleby