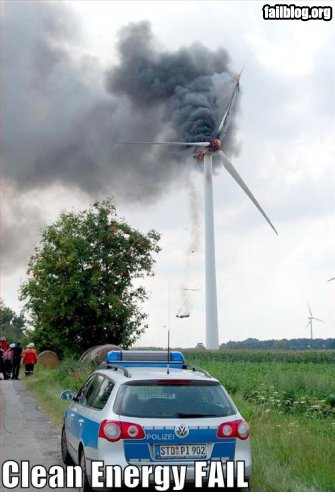 Sir,
I suspect Dr Kirkland is being optimistic in asking Councillor McLeod to say that the organisation "Nuclear Free Local Authorities" is not funded, reluctantly, by ratepayers.

The situation with the Councillor's fellow letter writer, Scottish Renewables is even more egregious. Nominally Scottish Renewables is "The Forum for Scotland's Renewable Energy industry". It exists to lobby government for more subsidy & to advertise & propagandise, not least by placing stories & writing letters in newspapers, to persuade us taxpayers to support giving them yet more money. I have previously pointed out how their letter, claiming that all methods of power generation will cost more in the future was the precise opposite of the truth, wind being 10 times the cost of nuclear. This "industry" makes its money overwhelmingly from government subsidy & could not last 5 minutes if it had to compete on a commercial level playing field. Indeed the Spanish "industry" is collapsing now that government money is being reduced.

While it is understandable on practical grounds, if not ethical ones, that Scotland's renewables "industry" should be willing to pour money into such a successful lobbying organisation it turns out that this is not the full story. While SR have declined to say exactly where the money comes from their membership list shows that they are supported by Aberdeenshire Council, Business Environment Partnership, the Carbon Trust, Dumfries & Galloway Council, the Energy Saving Trust & so on & on alphabetically through a long list of government organisations. Perhaps most disgracefully Scottish Enterprise, an organisation which received £500 million annually to "help" Scottish entrepreneurs is funding an organisation whose raison d'etre is to increase energy prices & thus make our industries less competitive. I don't even consider officially charitable bodies which receive at least their advertising budget from government (known across the blogsphere as "fakecharities", though the phenomenon goes unmentioned by the mainstream media.)

When you look across the "environmental" movement it is difficult to find any organisation which does not get money or support from government, quangos or "fakecharities" & cannot be called astroturf. The weird organisation, 10:10 which recently produced an obscene video, which went viral online, showing them murdering children for the crime of doubting catastrophic warming, not only got the personal support of Cameron & Huhne but is heavily funded by government through quangos & fakecharities. Even the BBC quango is notorious for giving far more coverage & infinitely more supportive coverage to the Green Party than to UKIP or the BNP though they get respectively 4 times & twice as many votes. This is clearly not merely propaganda but deliberate partisanship in UK party politics. The same applies to the "scientists" promoting catastrophic global warming - no "environmentalist" out of hundreds of thousands asked, have been able to name as many as 2, out of the majority of world scientists who don't work for government, who support this hypothesis, indeed when I asked Green leader Partick Harvie this on the radio he refused to answer on the grounds that "everybody knows" catastrophic warming is happening. It is perhaps uncharitable to point out that few if any leaders of the "environmental" movement work, or have worked for any length of time for anything other than government money & indeed usually in the more propagandistic rather than productive parts of government. Our own MSPs being no exception.

I submit that, were it not for government funding & propagandising by government organisations the dozens of global catastrophe stories promoted by the "environmental" movement over the last 40 years, all of which have been proven to almost entirely or completely entirely false, would not have garnered them even a fraction of the minuscule vote they actually receive.

What we are seeing is the proving of H.L. Mencken's words nearly a century ago "The whole aim of practical politics is to keep the populace alarmed (and hence clamorous to be led to safety) by menacing it with an endless series of hobgoblins, all of them imaginary." The entire "environmental" movement is & always has been a well financed front by government & those in power to maintain & increase that power, no matter how much economic harm it has done to the nation.
============================================

This article is led by "Sir" because if forms most of a letter I first sent to the Scotsman. It was the 3rd time I had sent a follow up to Councillor McLeod's reply To my reply to his reply in which he had claimed, quite dishonestly, that my figure of French nuclear costing 1/10th of windmills did not include decommissioning costs.

I had not been overly optimistic about the prospect of the Scotsman actually allowing a reply, having in my first letter, pointed out that the "environmentally aware" crowd do tend to lie outrageously, with "the same old untruths trusting that repetition & their more ready access to the media will trump mere facts."

Writing to them first was more in the nature of seeking experimental evidence. The refusal to publish a reply, after representatives of both the state funded "Nuclear Free Local Authorities" & the state funded "Scottish Renewables2 have been given repeated access to the letter pages is experimental proof that the charge is correct. However I am also today sending an edited version of this letter to the rest of the Scottish & UK media as a further experiment. I will let you know if any of them find a letter pointing out the degree to which government propaganda fakecharities dominate our mainstream media (MSM) publishable in any part of that media - I trust anybody seeing it in a newspaper page not appearing on Google News will let me know.

Comments:
Any way I'll be subscribing to your feed and I hope you post again soon. sushi-cat2.com

Extraordinary article with astounding idea!Thank you for such a significant article. I truly acknowledge for this awesome data.. Wondering where to go in 2019? Things to do has ranked as the best include a remote, idyllic island, the design capital ...