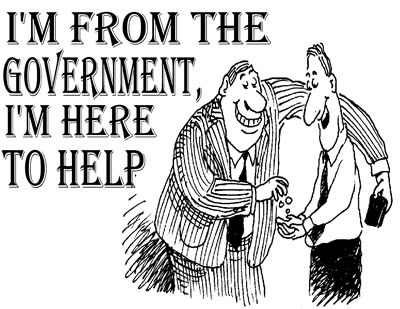 I have wanted to put this phrase of Pournelle's up for some time It strikes me as a profoundly accurate way of assessing how the world works. The remark about credentialism also ties in with the 2nd part of Saturday's posting about how scientific organisations & government have preferred to pay chosen researchers by their approval rating from scientific organisations & government (ie their credentials) though grants than by results (ie their results).

Russell Kirk taught us that we ought to approach defects in our nations as we would the wounds of a father. The neocons were useful allies during the Cold War... American Conservatives have some common interests with neocons, but we should not forget theit Trotskyite origins... Most of the neo-cons were Trotskyites or came from Trotskyite families (many being too young to have any notion of what things were like back in the Glory Days of the Trotskyites) and when they left their affiliations they didn't give up the notion that the world could be remade by dedicated revolutionaries and social engineering; that if they got control of the government they could do something wonderful. Give me the sword of state and I will make a more beautiful world.

Real conservatives understand that control of government isn't the key to making a wonderful world. At best we can get rid of some obstacles and give people opportunities to improve their lives. One would think that a study of history would show that, but apparently a lot of smart people continue to believe that they can remake not just their city, or county, or state, or nation, but the whole world, and all they need is control of the army and the tax collectors. Actually they don't think that way: they think about the wonderful things they can do, and forget that to do them they need tax collectors, and to support the tax collectors they need police, and behind the police stands the Army, prison, and the hangman. (Of course we don't have hangmen any more. We're more humane now. Progress.)

Government can protect some people from bad guys. It doesn't always do that and never does it perfectly, but it can, sometimes, do that. It can, sometimes, as Adam Smith notes, undertake projects that have great benefit to all with little benefit to any one person -- he had in mind roads and canals and fire departments, not the over-all direction of the economy. Alas, it doesn't take a lot of bad thinking to expand that list, and everyone does. After all, if we can put a man on the moon, surely we can give every child a world class university prep education, can't we? Not just in the United States, but everywhere. And guess what: all the university professors, both tenured and wannabe, agree completely, and rub their hands in anticipation -- since of course they won't be paid by those who will benefit from universal university education, but by the taxpayers who won't be asked what they think about having everyone go to university and get a degree if they want to become a manager at Jack In The Box. The largest joke is that even the taxpayers can't pony up enough, and everyone who goes to these overpaid institutions will get to pony up a grand a month for the rest of their lives; this in exchange for the pretended education they get in order to get the credentials that prove they are educated and worthy of having a job. Of course that credential can lead to one of the coveted positions among the governing class.

Comments:
I'm puzzled with lots of exercises. I was afraid I could not do the right time despite my hard work. I need a support person.
http://fivenightsatfreddysplay.com