IN MEMORIUM - PROFESSOR JOHN R. CAMERON - HE FOUGHT FOR SCIENTIFIC TRUTH AGAINST THE BARBARIANS 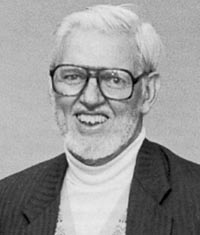 John R. Cameron, Emeritus Professor of Medical Physics at the University of Wisconsin

He was a founding member of the American Association of Physicists in Medicine (AAPM) and served as its 10th president in 1968.

John died on 16 March 2005 at age 82 in Gainesville, Florida, where he lived during the winter months and served as a Visiting Professor in the Department of Radiation Oncology at the University of Florida.

John guided the UW Medical Physics Program from a "one physicist" operation to one of the largest and most productive in the world. Presently there are 21 faculty and 8 postdoctoral appointees training 86 students. Since its founding in 1958, the program has awarded more than 185 PhD and 156 MS degrees. Graduates and trainees have become leading medical physicists - a source of great personal pride for John. The program was awarded departmental status in 1981, the first medical physics program to receive departmental status in the United States. John served as chair until his retirement in 1986.

At about the same time, John invented bone densitometry, which uses precise radiation measurements to determine the mineral content of bone....The number of bone densitometers in the world now exceeds 20,000.

John was deeply concerned with excess radiation exposures in diagnostic radiology. He developed simple test tools and techniques to measure radiation and to evaluate the quality of x-ray images. These efforts led to the creation of Radiation Measurements, Inc. (RMI), a pioneering manufacturer in quality-assurance measurements, materials, and devices. This also led to product developments by several companies and to several standard techniques for radiation measurement and image quality assurance.

More recently, John founded Medical Physics Publishing, a nonprofit corporation whose initial objectives were to provide reprints of useful but out-of-print books. That company now publishes a wide spectrum of original books and is a major source of material relating to health physics and medical physics.

John was interested in developing new applications of physics to medicine. He preferred to hire new faculty whose research was not in the mainstream at the time. John started a program for radiation physics measurement that with federal funding became the Midwest Center for Radiation Physics. His foresight led to the early development of significant programs at UW-Madison in applications that eventually became "mainstream," including ultrasound, positron imaging, and digital angiography, to name but a few. He also helped initiate a program in magneto-encephalography, looking at the magnetic signals emitted by the brain. After his retirement, his interests spread into still more areas, including imagination and creativity.

So a very creative person who contributed to the human race in ways which I'm sure neither Obama or Brown could even understand.

This is what brought me here

In recent years he devoted himself to educating the public accurately about the benefits and risks of radiation used in medicine. He was especially concerned about the fear caused by low-level radiation and analyzed much data to illustrate that these fears probably are unfounded. He argued this aspect by talking about longevity being a measure of health effects of radiation (Radiology 229:14-16; 2003). Indeed, he argued (convincingly) that radiation might be a beneficial "trace element" at very low doses (Physics and Society October 2001).

This is the paper he submitted to the British government's Committee Examining Radiation Risks of Internal Emitters (CERRIE). It lists a whole range of pieces of strong evidence that not only is low level radiation not harmful but that the hormesis effects are significantly beneficial. He describes:

100 year study of mortality of British radiologists, compared to other medical practitioners.

Both of which show greater longevity to those who "suffer" greater radiation exposure & says "There is very likely an optimum dose rate of radiation for good health just as there are optimum levels for essential vitamins & trace elements in our diet. I believe that most people are suffering from radiation deficiency and that the recommended average dose (RAD) of radiation will be significantly higher than the annual dose most humans receive from background."

This is a very credible opinion from a very experienced & capable expert.

CERRIE was set up by Michael Meacher, a Luddite so committed to PC cliches & lies that he became Environment Minister & so useless, lunatic & incompetent that the other Labour Ministers, corrupt, genocidal, child raping, organlegging war criminals though they are, noticed & he was fired.

11 - The Committee recognised that epidemiological data relating to low levels of exposure are compatible with a range of curves describing the variation of the underlying risk with the level of exposure, including a curve that is steeper than the LNT relationship (a ‘supralinear’ curve), no risk below a certain level (‘threshold’), or even a protective effect (‘radiation hormesis’). The Committee was divided as to which type of dose–response was considered to be the most convincing description of the available scientific evidence. The member of the Committee who believed most strongly in the existence of a threshold and/or hormesis based his conclusion upon mechanistic arguments and his interpretation of the results obtained from several epidemiological studies (Rowland, 1994; Thomas, 1994; Voelz et al, 1997; Ghiassi-nejad et al, 2002; Calabrese and Baldwin, 2003; Cameron, 2003). However, most of the Committee considered that the epidemiological evidence for radiation hormesis or a threshold as the preferred risk model was not persuasive (pdf)

They clearly accepted that there was such evidence of hormesis & that it was sufficiently strong to say the Linear No-Threshold (LNT) theory had no stronger grounding. Then they went for the official LNT theory anyway.

simply could not have honestly failed to say in their conclusions that there was no credible evidence for the LNT theory & that any decision to maintain it was a purely political not scientific one, but this is precisely what they failed to do. They could have & did suggest further research, but not strongly & not in any way letting it interfere with the present hysteria.

Sometimes I get depressed seeing the way government can brush off obvious truth from decent, competent & honourable people & can always find incompetent corrupt & dishonest parasites for their quangos to pretend to impartially investigate. This is one such time.

Comments:
the program has awarded more than 185 PhD and 156 MS degrees. Graduates and trainees have become leading medical physicists - a source of great personal pride for John. The program Our Stellenbosch Restaurant here was awarded departmental status in 1981, the first medical physics program to receive departmental status in the United States. John served as chair until his retirement in 1986.