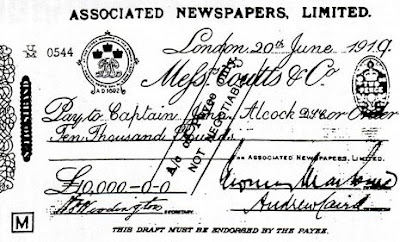 This is from Wikipedia.
Between 1907 and 1925 the Daily Mail newspaper, initially on the initiative of its proprietor Alfred Harmsworth, 1st Viscount Northcliffe,[1] awarded numerous prizes for achievements in aviation. The newspaper would stipulate the amount of a prize for the first aviators to perform a particular task in aviation, or to the winner of an aviation race or event. The most famous prizes were the £1,000 for the first cross-channel flight awarded to Louis Blériot in 1909 and the £10,000 given in 1919 to Alcock and Brown for the first transatlantic flight between North America and Ireland.

The prizes are credited with advancing the course of aviation during the early years, with the considerable sums offered becoming a much-coveted goal for the field's pioneers.

Because of inflation £1000 now isn't quite what it used to be. In fact adjusted £1000 in 1914 is now
£71,530.83 using the retail price index
£92,836.79 using the GDP deflator
£373,307.88 using the average earnings
£441,900.89 using the per capita GDP
£588,646.19 using the share of GDP
When working out the modern equivalent for a Daily Mail we should probably use per capita average earnings as a comparison of what could be afforded now. Sky, ITV or some other more modern news disseminator should compare with the current GDP proportions.

That means the equivalent of the 1st & runner up prizes for the first transatlantic flights would be £8.8 million slightly more than the Ansari X-Prize for the first private spaceship. Equating to the US economy that is $70 million. However we now have worldwide media corporations & since the world economy is 23 times Britain's the equivalent for a global player would be as high as £200 million ($320 million).

Note that though Harmsworth probably wanted to support aviation technology for its own sake he was an extremely astute businessman with a lot of shareholders rather keen on their dividends. The Mail put up these prizes not out of niceness but because they realised the positive advertising & news exclusives it gave them were worth the money. In fact news & entertainment are a far larger part of society now than then because we spend a much smaller proportion of our incomes on basic survival. Thus these figures may be erring on the conservative side, certainly they don't overstate the situation. If, as a society, we just had the gumption.

And an X-Prize for 1st & 2nd prizes totalling $750 million would get humanity an orbital shuttle.

I felt pleasure in reading your blog and agree with the points that you mentioned clearly. I also noticed that your blog addresses a lot of students whose main worries relates to academic concerns and assignment parts. However, My Assignment Services has the capability to provide the best assignment help Malaysia, Australia, USA, Canada, Malaysia, South Africa, and many around the whole world. They have experts who handle every assignment type such as essays, reports, or even academic blog writing help. They have a number of experts who provides you full fledged assignments at the best quality. They keep on running major discount offers by which students can opt the best assignment expert to help you at minimum possible prices. We provide our specialised assignment help Malaysia in every disciplines that you are dealing into. Just visit our website, state your requirements and leave the rest on us.