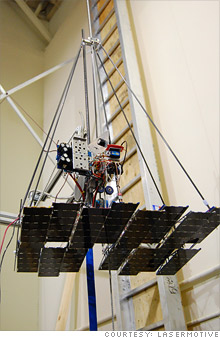 Via Pournelle's site comes news that an X-Prize has been won for the development of a laser powered lift that has risen to nearly 1 km.

A robot powered by a ground-based laser beam climbed a long cable dangling from a helicopter on Wednesday to qualify for prize money in a $2 million competition to test the potential reality of the science fiction concept of space elevators...

The contest requires their machines to climb 2,953 feet (nearly 1 kilometer) up a cable slung beneath a helicopter hovering nearly a mile high.

LaserMotive's vehicle zipped up to the top in just over four minutes and immediately repeated the feat, qualifying for at least a $900,000 second-place prize.

... They said their real goal is to develop a business based on the idea of beaming power, not the futuristic idea of accessing space via an elevator climbing a cable.

"We both are pretty skeptical of its near-term prospects," Kare said of an elevator.

The contest, however, demonstrates that beaming power works, Nugent said.

"Anybody who needs power in one place and can't run wires to it — we'd be able to deliver power," Kare said.

Earlier out on the lakebed, team member Nick Burrows had pointed out how it grips the cable with modified skateboard wheels and the laser is aimed with an X Box game controller...

The competition was five years in the making, Shelef said.

"A lot of hurdles to cross," he said. "Now that it's happening I'm actually happy already. It doesn't matter what the outcome is."

Funded by a NASA program to explore bold technology, the contest is intended to encourage development of a theory that originated in the 1960s and was popularized by Arthur C. Clarke's 1979 novel "The Fountains of Paradise."

Space elevators are envisioned as a way to reach space without the risk and expense of rockets.

Instead, electrically powered vehicles would run up and down a cable anchored to a ground structure and extending thousands of miles up to a mass in geosynchronous orbit — the kind of orbit communications satellites are placed in to stay over a fixed spot on the Earth.

Electricity would be supplied through a concept known as "power beaming," ground-based lasers pointing up to photo voltaic cells on the bottom of the climbing vehicle — something like an upside-down solar power system.

The space elevator competition has not produced a winner in its previous three years, but has become increasingly difficult...

While the concept of an elevator to space may seem too fanciful, Andrew Williams, 26, a mechanical engineer on the Saskatchewan team, said he has no doubts it will come about.

"Once we put our minds to something it's just a matter of time for us to achieve it," he said.

Once again we see that X-Prizes can stimulate innovation in a way which conventional funding grants would look askance at (X-box controls & skateboard wheels).

I am also dubious about "near term" building of a space elevator if that means less than half way through the careers of LaserMotive's owners. On the other hand I would be much more surprised if (unless we destroy ourselves) it took until the 22nd century as envisioned in 1979 by Arthur C. Clarke. Though the big science is being sat on the smaller stuff, including strength of materials research is going very fast.

PS Chaos Manor has also been discussing nuclear power & mentioned an article I have previously discussed about the AP1000 reactor costing as low as $1.2 bn.

Comments:
I am not surprised that Jerry has something to say about this - it is akin to the system he described in 'High Justice' and 'Exiles to Glory' except there a pulsed set of lasers were used to heat the air which produced the lifting thrust of the capsules.