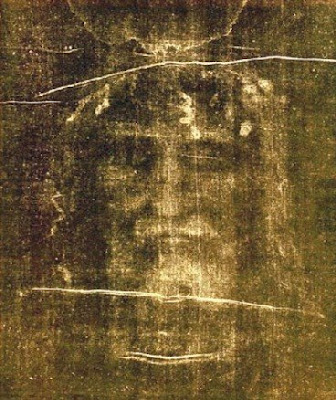 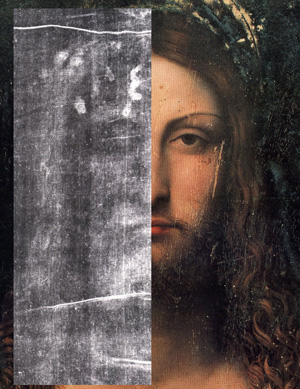 Last night Channel 5 had a remarkable programme about the Turin Shroud which produced the theory that the Turin Shroud had been produced by Leonardo da Vinci. Now when I saw the trailer for this I doubted it for the same reason I find it statistically unlikely that Jack the Ripper was the Prince Regent or that Oedipus really was the long lost son of Lais.

However I found the case convincing. Leonardo really had been interested in the Camera Obscura, he really had an amazing knowledge of anatomy for the time, he really had experimented with chemicals like silver sulphate & the number of people in Renaissance Europe who could say all that could be counted on 1 thumb. On top of that there was evidence that he had been interested in how a hand with a nail though it would be & the dimensions of the head fit perfectly with his perfect head & not least that if it wasn't created miraculously it must have been done by a really great artist & with technique not known before the Renaissance.

That it was inspiring art is shown by the fact that before then Jesus had been depicted in any number of ways but now he is always the long haired beardy pictured in the Shroud.

American artist Lillian Schwartz, a graphic consultant at the School of Visual Arts in New York who came to prominence in the 1980s when she matched the face of the Mona Lisa to a Leonardo self-portrait, used computer scans to show that the face on the Shroud has the same dimensions to that of da Vinci.

“It matched. I'm excited about this,” she said. “There is no doubt in my mind that the proportions that Leonardo wrote about were used in creating this Shroud's face.”

The claims is made in a Channel Five documentary, to be shown on Wednesday night, that describes how da Vinci could have scorched his facial features on to the linen of the Shroud using a sculpture of his face and a camera obscura – an early photographic device.

The programme says the fabric could have been hung over a frame in a blacked-out room and coated it with silver sulphate, a substance readily available in 15th century Italy which would have made it light-sensitive.

When the sun's rays passed through a lens in one of the walls, da Vinci’s facial shape would have been projected on to the material, creating a permanent image.

Lynn Picknett, a Shroud researcher and author, said: “The faker of the shroud had to be a heretic, someone with no fear of faking Jesus’ holy redemptive blood.

“He had to have a grasp of anatomy and he had to have at his fingertips a technology which would completely fool everyone until the 20th century.

Art historian Professor Nicholas Allen, of Nelson Mandela Metropolitan University in South Africa, has called for more tests on the Shroud for the presence of silver sulphate, which causes a reaction with the sun's UV rays.

He said: "If you look at the Shroud of Turin as it appears to the naked eye, you see a negative image of a human being, and if you take a photograph of that you produce a positive image of that human being, which means the shroud is acting as a negative.

"That in itself is a very good clue that it was made photographically."

The programme explains the theory that da Vinci's forgery was commissioned to replace an earlier version that was exposed as a poor fake, which had been bought by the powerful Savoy family in 1453 only to disappear for 50 years. When it returned to public view, it was hailed as a genuine relic, and experts say it was actually the artist's convincing replica.

American Professor Larissa Tracy, of Longwood University in Virginia, told the programme: "Da Vinci had the necessary skills. He knew enough about anatomy and about the physical muscular structure of the body. Da Vinci had all the skills to create an image like the shroud. If anybody had the capacity to work with camera obscura or early photographic technique, it was Leonardo Da Vinci."

I find this wonderful. If art is the process of inspiring awe & empathy (Heinlein somewhere) the Crucifixion of the Son of God is about the best possible subject for it. And Leonardo produced the best possible way of evoking it. It is a work of art which embraces so many fields, which is a unique technology, whose achievement has transcended the importance of any other non-functional piece of art in the history of humanity.

Compared to this the Mona Lisa is just a painting.

I will not quite say it would not be greater if it had turned out to be the real thing - but not that far short. Certainly it is no more a "fake" than Faberge's eggs are fake eggs.

It also shows that great art should push the envelope of human experience & that science by definition does so. Modern art is so crap because having disconnected with science it can do nothing original & is reduced to Damien Hurst flogging bits of embalmed shark for novelty. LEONARDO WAS A GREAT ARTIST BECAUSE HE WAS A GREAT SCIENTIST.

And then the magnificent arrogant bastard put his own face on it & persuaded the post Renaissance world it is the face of God.