SEPTEMBER 1859 - CARRINGTON EVENT THE WORLDWIDE CATASTROPHE YOU NEVER HEARD OF

At 11:18 AM on the cloudless morning of Thursday, September 1, 1859, 33-year-old Richard Carrington—widely acknowledged to be one of England's foremost solar astronomers—was in his well-appointed private observatory. Just as usual on every sunny day, his telescope was projecting an 11-inch-wide image of the sun on a screen, and Carrington skillfully drew the sunspots he saw.

On that morning, he was capturing the likeness of an enormous group of sunspots. Suddenly, before his eyes, two brilliant beads of blinding white light appeared over the sunspots, intensified rapidly, and became kidney-shaped. Realizing that he was witnessing something unprecedented and "being somewhat flurried by the surprise," Carrington later wrote, "I hastily ran to call someone to witness the exhibition with me. On returning within 60 seconds, I was mortified to find that it was already much changed and enfeebled." He and his witness watched the white spots contract to mere pinpoints and disappear.

Just before dawn the next day, skies all over planet Earth erupted in red, green, and purple auroras so brilliant that newspapers could be read as easily as in daylight. Indeed, stunning auroras pulsated even at near tropical latitudes over Cuba, the Bahamas, Jamaica, El Salvador, and Hawaii.

What he had seen was the most massive solar flare over the last 500 years. Fortunately for the people of 1859 electrical equipment was not common nor as finely engineered & thus subject to electromagnetic pulse (EMP) damage as nowadays. Today miles of wires are common & all our machines are much more sensitive. There has been no flare anywhere close to matching this but a "huge solar flare on August 4, 1972, knocked out long-distance telephone communication across Illinois. That event, in fact, caused AT&T to redesign its power system for transatlantic cables. A similar flare on March 13, 1989, provoked geomagnetic storms that disrupted electric power transmission from the Hydro Québec generating station in Canada, blacking out most of the province and plunging 6 million people into darkness for 9 hours; aurora-induced power surges even melted power transformers in New Jersey. In December 2005, X-rays from another solar storm disrupted satellite-to-ground communications and Global Positioning System (GPS) navigation signals for about 10 minutes" 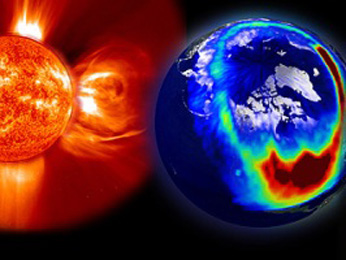 None of these are catastrophic but none of these flares are in the same league as Carrington. According to a report in New Scientist (hat tip to Al Fin & Jerry Pournelle):

it is clear that a repeat of the Carrington event could produce a catastrophe the likes of which the world has never seen. "It's just the opposite of how we usually think of natural disasters," says John Kappenman, a power industry analyst with the Metatech Corporation of Goleta, California, and an advisor to the NAS committee that produced the report. "Usually the less developed regions of the world are most vulnerable, not the highly sophisticated technological regions."

According to the NAS report, a severe space weather event in the US could induce ground currents that would knock out 300 key transformers within about 90 seconds, cutting off the power for more than 130 million people (see map). From that moment, the clock is ticking for America.

First to go - immediately for some people - is drinkable water. Anyone living in a high-rise apartment, where water has to be pumped to reach them, would be cut off straight away. For the rest, drinking water will still come through the taps for maybe half a day. With no electricity to pump water from reservoirs, there is no more after that.

There is simply no electrically powered transport: no trains, underground or overground. Our just-in-time culture for delivery networks may represent the pinnacle of efficiency, but it means that supermarket shelves would empty very quickly - delivery trucks could only keep running until their tanks ran out of fuel, and there is no electricity to pump any more from the underground tanks at filling stations.

Back-up generators would run at pivotal sites - but only until their fuel ran out. For hospitals, that would mean about 72 hours of running a bare-bones, essential care only, service. After that, no more modern healthcare.

The truly shocking finding is that this whole situation would not improve for months, maybe years: melted transformer hubs cannot be repaired, only replaced. "From the surveys I've done, you might have a few spare transformers around, but installing a new one takes a well-trained crew a week or more," says Kappenman. "A major electrical utility might have one suitably trained crew, maybe two."

Within a month, then, the handful of spare transformers would be used up. The rest will have to be built to order, something that can take up to 12 months.

Even when some systems are capable of receiving power again, there is no guarantee there will be any to deliver. Almost all natural gas and fuel pipelines require electricity to operate. Coal-fired power stations usually keep reserves to last 30 days, but with no transport systems running to bring more fuel, there will be no electricity in the second month.

...With no power for heating, cooling or refrigeration systems, people could begin to die within days. There is immediate danger for those who rely on medication. Lose power to New Jersey, for instance, and you have lost a major centre of production of pharmaceuticals for the entire US. Perishable medications such as insulin will soon be in short supply. "In the US alone there are a million people with diabetes," Kappenman says. "Shut down production, distribution and storage and you put all those lives at risk in very short order."

Help is not coming any time soon, either....
"I don't think the NAS report is scaremongering," says Mike Hapgood, who chairs the European Space Agency's space weather team. Green agrees. "Scientists are conservative by nature and this group is really thoughtful," he says. "This is a fair and balanced report."...

Europe's electricity grids, on the other hand, are highly interconnected and extremely vulnerable to cascading failures.

The chances of this are 1 in 500 each year not that one will come around every 500 years & that we need only worry in 2358AD. Now if this is scary & it should be lets not overplay it. Firstly we are now in a period of low sunspots so the odds of it any time in the next few years are far lower. Secondly it can be avoided:

"The good news is that, given enough warning, the utility companies can take precautions, such as adjusting voltages and loads, and restricting transfers of energy so that sudden spikes in current don't cause cascade failures. There is still more bad news, however. Our early warning system is becoming more unreliable by the day." Transmission systems might also work less efficiently if more breakers were in place. In the same way banking works more efficiently if banks don't have to keep large reserves - right up until things go wrong.

If we update infrastructure over the next 10-15 years as part of routine maintenance it should be possible to protect systems at a reasonable cost. The risk is not that nothing can be done but that since we have no experience of this, governments will simply ignore it, as indeed they have up to now. Unlike Y2K there isn't a deadline to stimulate thought, however it is clearly a much more real problem than that & a more imminent problem than catastrophic warming. I also think more real but certainly more imminent is unarguable. This is not the sort of scare that can be easily visualised by Luddites which is the problem.

Comments:
If we update infrastructure over the next 10-15 years as part of routine maintenance it should be possible to protect systems at a reasonable cost.

I can't see it happening. Most private power companies here in the States have thin margins if I remember correctly. This shows in the constant transformer fires that seem to occur regularly here in America. High tax areas like NJ and decaying areas like Michigan seem to have it the worst. Texas hasn't ever been affected by a major statewide blackout that I know of.

Lastly, here in America PCBs were banned a few years ago as a threat to drinking water supplies. PCBs were used as a fire retardant in the oil bath in transformers. Transformers without this fire retardant are more likely to burst into flames, and do, which is another explanation for the more frequent large transformer fires.

What I wrote above just proves that people who vote Democratic will eventually have a lower standard of living, if not actual poverty. And yet some seem to never learn.

Another example of how regulations to protect the "environment" are bound to have "unforeseen" costs. A higher standard of living is the necessary first step to making us & our environment safer. State regulators could demand that such safety ,easures be done & as I say they would be affordable id fone as part of routine maintenance but they would then have to lighten up on price controls. Of course a competently regulated nuclear would be far cheaper anyway.

Here in America the feds mandated that all of the states go to an open model where the local power company is just a carrier for electricity not a unified provider. This caused the California electricity crisis. Prior to Washington trying to use force to bring about competition the states, even the socialist ones, had functioning power grids. The socialist clowns in California may be wrong on economics and race, but they live in California so they can manage a state regulated business better. The one state where this type of forced competition works is Texas, which has its own independent power grid. I personally would have liked for the feds to scrap the Federal Power Board and its current succesor, not force a breakup for better competition. The states can enact price controls if they wish.

The other cause of the California electricity crisis was the undercount of the number of illegals in the state, and therefore the underestimation of the number of future customers when drawing up capital plans. Second Cali imports its power due to oppressive state regs that prevent new power plants from being built. As a result I pay about $0.11/kWh and the residents of Cali pay $0.15/kWh. Texas pays the same as Cali.

I think less central government & more state decision making would allow the US to experiment in what works. This is the advantage of federations. The 9th & 10th amendments to the US constitution were supposed to limit the powers of Washington but do not seem to be applied.

CMEs happen, and will blow things up regardless of whether they are in Republican or Democratic areas. Unfortunately, Katrina has made a "hero" of little Bobby Jindal. Let's hope that the next CME doesn't hit Alaska the hardest and make a hero of Smarmy Sarah.

I think if a hurricane, or more likely volcano or earthquake hit Alaska the MSM would be explaining why it was her fault & why, as a woman, she was particularly ill equipped to handle it.

But if a liberal woman governor were to have a volcano go off in her state it would not be used against her.

I think if a hurricane, or more likely volcano or earthquake hit Alaska the MSM would be explaining why it was her fault & why, as a woman, she was particularly ill equipped to handle it. embroidered lawn dresses , designer lawn collection