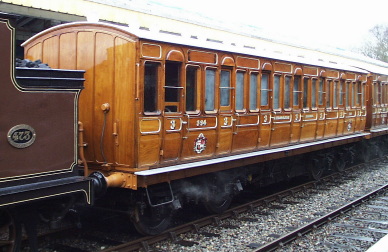 If our housing industry could learn from automobiles imagine how much railways can. Because access to rail is centrally controlled, even when in the private sector, it is less open to technological change & you can see that railway carriages now are pretty similar to how they were a century ago while cars are completely different.

What modern automated rail systems there are tend to be newly built. Docklands Light rail shows what can be done. with small units similar to buses in style & weight & without needing drivers. The weight bit matters not just because a heavy train uses more energy moving a passenger than a lighter bus but also because the amount of traffic a line can carry depends much more on the weight of units than on the number of them. Thus the reason why cars can drive nearly bumper to bumper & trains are, at best, 10 minutes apart is because the weight means the track can't do better & stopping distances are so very long.

Driverlessness is being seen even for cars & trains are obviously an infinitely less complex system. Docklands is only 1 of many driverless systems worldwide. & it is only a matter of time till some nation moves from automated new systems to automating the old systems as well.

Ultimately it is perfectly possible to have a countrywide rail system with single carriage units (bus sized or ultimately even taxi sized)leaving every few minutes, all day & indeed night. This would be cheaper to run yet able to carry many more passengers with a wider range of destinations, with little waiting time at stations. Such a system would be a genuine competitor, indeed usually superior, to car travel. You could buy a ticket at John O' Groats for Landsend with perhaps 2 or 3 5 minute changes, far faster & for less cost than the equivalent (if there were an equivalent) bus. Indeed for a bit more you could take an automated taxi. The ease of moving containers is also obvious.

Comments:
I'm not persuaded that rail makes any sense at all. Steel-on-steel traction along fixed routes? Madness.

How about little engineering?

If you look up the Drupal content management system you will see that if you download and install it on a server you can create a website for the 9% growth party that looks professional. The Brussels Journal uses Drupal and you can too.

Imagine a website like www.9percentgrowth.uk or www.neilcraig.uk where a person can find a blog, position papers and whatever else you feel is necessary. Presentation can be a major part of success in politics, and with good presentation you could win a seat or two.

Thanks - will look it over.

If you do decide you try something with a CMS like drupal, or setting up your own domain, I could give you a hand if you'd like. I have a little experience with stuff like that, as well as server setup, administration & maintenance. It couldn't hurt to have some free tech support in the next room, at the least :)