You know how the BBC & British media always play up when some Republican politician says something where they have clearly got the phrase slightly wrong [like the "legitimate rape" line where he was actually talking about rapes which were real rather than false accusation, not about it ever being legal]; or indeed perfectly correct, but not known by journalists [Sarah Palin's remark that Paul Revere warned the British off from messing with the local militia]; or really rather brilliant [Rumsfeld's "known unknowns" remark] which you have to listen to to get, again a problem for journalists; or which they just never said, but don't let that stop anybody [Palin's "I can see Russia from my house" actually said by Tina Fay]

And they never do the same for Democrats, or indeed for approved British politicos.

Well here is a doozy the entire Democrat Party managed.

On the last night of the Democratic National Convention, a retired Navy four-star took the stage to pay tribute to veterans. Behind him, on a giant screen, the image of four hulking warships reinforced his patriotic message.


But there was a big mistake in the stirring backdrop: those are Russian warships.

While retired Adm. John Nathman, a former commander of Fleet Forces Command, honored vets as America’s best, the ships from the Russian Federation Navy were arrayed like sentinels on the big screen above.....

These were the very Soviet-era combatants that Nathman and Cold Warriors like him had once squared off against.

For example, the ship in the foreground, on the far right, has a square radar antenna at the top of its masthead. That is the MR-700 Podberezovik 3-D early warning radar, commonly identified as “Flat Screen” for its appearance, a three-dimensional early warning radar mounted on the Kerch, said Eric Wertheim, editor of “Combat Fleets of the World.”

Similarly, the third ship has a MR-310 “Head Net” air search radar, shaped like two off-set bananas, at its masthead and is mostly likely the guided missile destroyer Smetlivyy. The first two ships seem to be Krivak-class frigates, but it’s hard to discern from the silhouette, experts said.

But the fact they are Russian ships is not in doubt. In addition to the ship’s radar arrays and hulls, which are dissimilar from U.S. warships, the photo features one more give-away: a large white flag with a blue ‘X’ at the ships’ sterns.

Polmar, who authored “The Naval Institute Guide to the Soviet Navy,” recognized the blue ‘X’-mark: “The X is the Cross of St. Andrew’s, which is a Russian Navy symbol,” Polmar said. (An anchored U.S. warship, by contrast, flies the American flag on its stern.)

Expect to see zero Beeboids laughing at this one and saying it proves they are not competent to run the show. 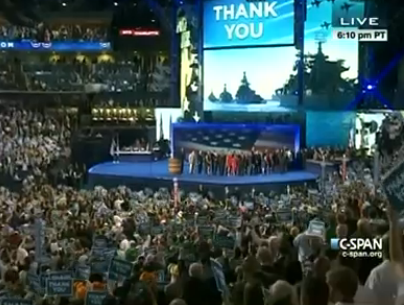 A less silly event at the same convention was when the chair, at the behest of Obama, asked for them to change previously agreed convention rules which would have prevented any mention of God or of the capital of Israel being Jerusalem. All rather trivial but the sort of tokenism that annoys people and if they had been sensible would never have done in the first place. Because this was a late alteration it had to be accepted by a 2/3rds majority. So. early in the morning when there were few delegates there the chairman asked the assembly for permission to change it. To his obvious surprise delegates failed to pass it by acclimation.

So in the best traditions of the EU telling the Irish or Danes they had come up with the wrong answer, he asked them twice more. The third ended with opponents being at least a little louder than supporters. So instead of actually carrying out the vote as any democratic organisation would do, he just declared that his ears said it had passed anyway.

The issue itself is of little importance and the organisers were certainly right that to keep out God and Jerusalem would have unnecessarily annoyed a number of potential voters.

The real issue is how much contempt the party leaders have demonstrated they have for, in reverse order, their delegates, democracy, their own party constitution & that they think, correctly it seems, that the media would keep quiet about it.

People who will do that will break real laws when they have the real power and media which will censor silly stuff like that, even when the proof has been videod, will censor important and unquestionable lawbreaking too.

Comments:
Worth watching that triumph of democracy.
http://www.youtube.com/watch?v=cncbOEoQbOg&feature=player_embedded