Steve Sailor does an article on golf course architecture. Now I have no interest in golf but it is always worth watching somebody inteligent speak or write on something that really interests them and which they understand.

What I got from this is that golf courses, while entirely artificial constructs, are designed to replicate the most desirable human environment.


the nearly universal favorite among children before they imprint upon their local look is grassy parkland, and that fondness survives into adulthood.
Richard Conniff wrote in Discover: "In separate surveys, Ulrich, Orians, and others have found that people respond strongly to landscapes with open, grassy vegetation, scattered stands of branchy trees, water, changes in elevation, winding trails, and brightly lit clearings..." In one amusing study, 1001 people from 15 different countries were surveyed about what they'd like to see in a painting. Then the sponsors of the research, conceptual art pranksters Komar and Melamid, painted each country's "Most Wanted Painting." Even though the researchers hadn't mentioned what type of picture it should be, the consensus in 13 of the 15 cultures favored landscapes and 11 of the 15 looked surprisingly like golf courses. All over the world, people want to see grassland, a lake, and some trees, but not a solid forest. And they always want to see it slightly from above. The project was intended to satirize popular taste, but it ended up revealing much about about human desires. Above is Komar and Melamid's rendition of America's Most Wanted Painting and here's a par 3 from the Coeur d'Alene golf course in Idaho that is similar in outline but aesthetically superior in execution.
The current theory for why golf courses are so attractive to millions (mostly men), perhaps first put forward in John Strawn's book Driving the Green: The Making of a Golf Course, is that they look like happy hunting grounds—a Disney-version of the primordial East African grasslands. Harvard biologist Edward O. Wilson, author of the landmark 1975 book Sociobiology, once told me, "I believe that the reason that people find well-landscaped golf courses 'beautiful' is that they look like savannas, down to the scattered trees, copses, and lakes, and most especially if they have vistas of the sea."

Hmm perhaps the regular presence of either sea or running water in so many landscapes also supports the idea that much of human evolution came about with us moving to the seashore.

My personal favourite of the pictures he illustrates it with     Which brought up the thought. Within decades it will be possible to start building the first O'Neill colony. Since this is an almost infinitely scalable industry (even after we have removed a few kilometres of topsoil off the Moon there are many other asteroids, comets and such out there.      So in due course humanity will be manufacturing landscape by the hundreds, even thousands, of square miles. 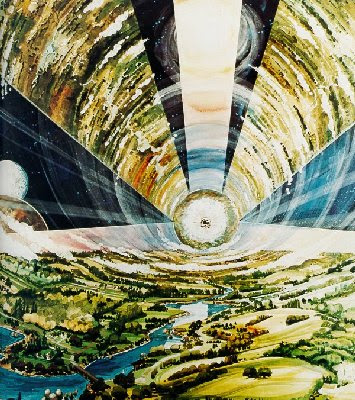 Yep - that does look like it could do with a bit of design work. Guess where we can find designers.   PS I also strikes me that this artificial re-Edenising of large chunks of land (minimum 1/4 square mile) each, is one in the eye to the ecofascist who insist that "it is undeniable that mankind is destroying the Earth". It is actually undeniable that in substantial places, by any standard of human beauty, we are making it far better than nature ever did.

Comments:
My husband is an amateur golf course designer (if such a thing exists.) He's on the board at his local club and they go to him when they're remodelling the course or a particular hole. I showed him this article and he loved the statement 'designed to replicate the most desirable human environment.' Although the terraforming went over his head, I don't think he'll be applying it when he visits Belmont Golf Course this weekend.

I hope he read Steve Sailer's original, linked at the start, too. I am sure he will enjoy that even more.