When it comes to household energy, Britain is less than three years away from an affordability crisis, according to new research from independent price comparison and switching service uSwitch.com.
While we all have a responsibility to use energy sparingly, we also have a right to a safe and warm hom.e According to the research, household energy bills have more than doubled in the last eight years. If this trend continues, uSwitch.com says the average annual bill is set to break the £1,500 barrier by 2015 and will continue upwards to hit £2,766 a year by 2018.

An annual energy bill of £1,500 is the tipping point at which energy bills will become unaffordable in the UK, says the research. When this point is reached, 77% will be forced to ration their energy use, 59% will go without adequate heating and 36% will be forced to turn their heating off entirely.
If bills then hit £2,000 a year - which the uSwitch.com forecast suggests could happen in 2016 - almost nine in 10 households (88%) will be rationing their energy use, 75% will be going without adequate heating and over half (55%) will turn their heating off entirely.

With 55% of people & presumably a far higher proportion of pensioners having to turn off their heating the death toll is going to be horrendous. Far higher than the current 25,000 a year excess winter deaths.

Doubtless the MSM, which is in the hands of the politicians, will continue to denounce the energy companies for the prices the politicians are 100% responsible for. That isn't going to save one life. All it can do will be to persuade those in the power industry to emigrate.

But this isn't all of it, not even half.

But all the rest has to be paid for too and ultimately is paid in higher prices for everything else - so households pay for it all, just mostly indirectly.

Worse than that such prices are going to force any part of the economy that can do so, i.e.manufacturing, into either emigration or bankruptcy, as they are unable to compete. Which has been happening for years and is getting worse.

Britain's MPs overwhelmingly and Scotland's MSPs, unanimously, are engaged in a deliberate attempt to pastoralise the country and and kill people in a manner which is likely in time to exterminate more people than died in Cambodia's killing fields (25,000 a year for the last 15 years and rising).

None of this need happen. At least 93% of the current £1252 average bill is government parasitism. Electricity bills could be reduced to around £100 a year, over time, by simply allowing the mass production of nuclear reactors with a level regulatory field for their use. Allowing the development of shale gas could do nearly as much, since US gas prices are already 1/6th of  our rising ones and falling. 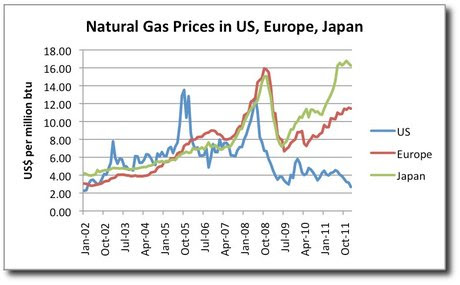 Within days of starting an emergency development programme we would see the necessary business confidence that Britain was a sensible place to invest, bringing us out of recession. It would probably be a year before shale gas was being pumped into the system, bringing downward pressure on prices, and 3 years before the nuclear plants were making prices actually fall but would that not be better than "55% of households will have to turn of their heating altogether".